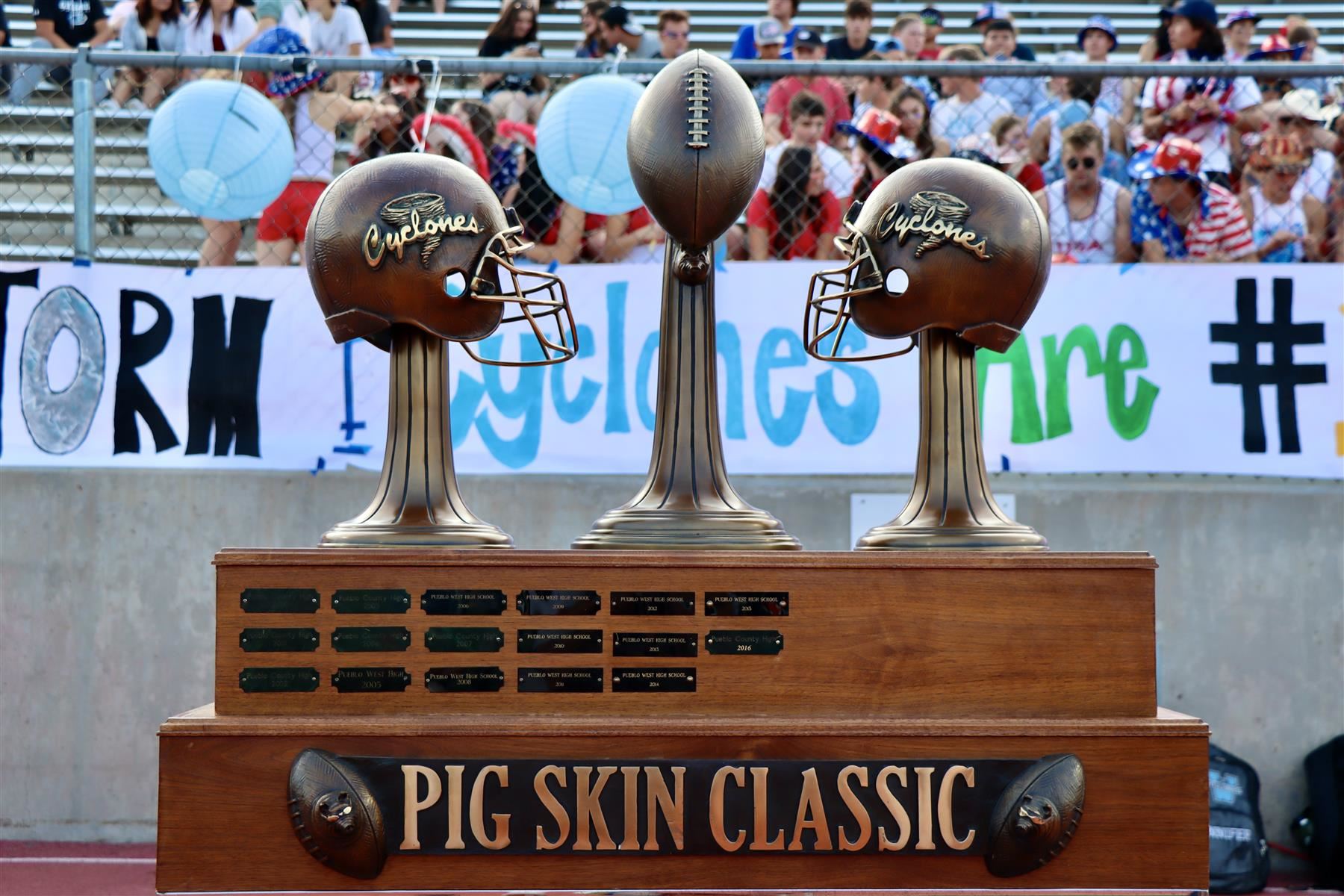 Producing a sporting event for live-streaming and showcasing on the Jumbotron screen requires a meticulous attention to detail, the ability to think on one’s feet in the midst of challenges – whether technical or weather-related – sharp focus and, above all, teamwork. 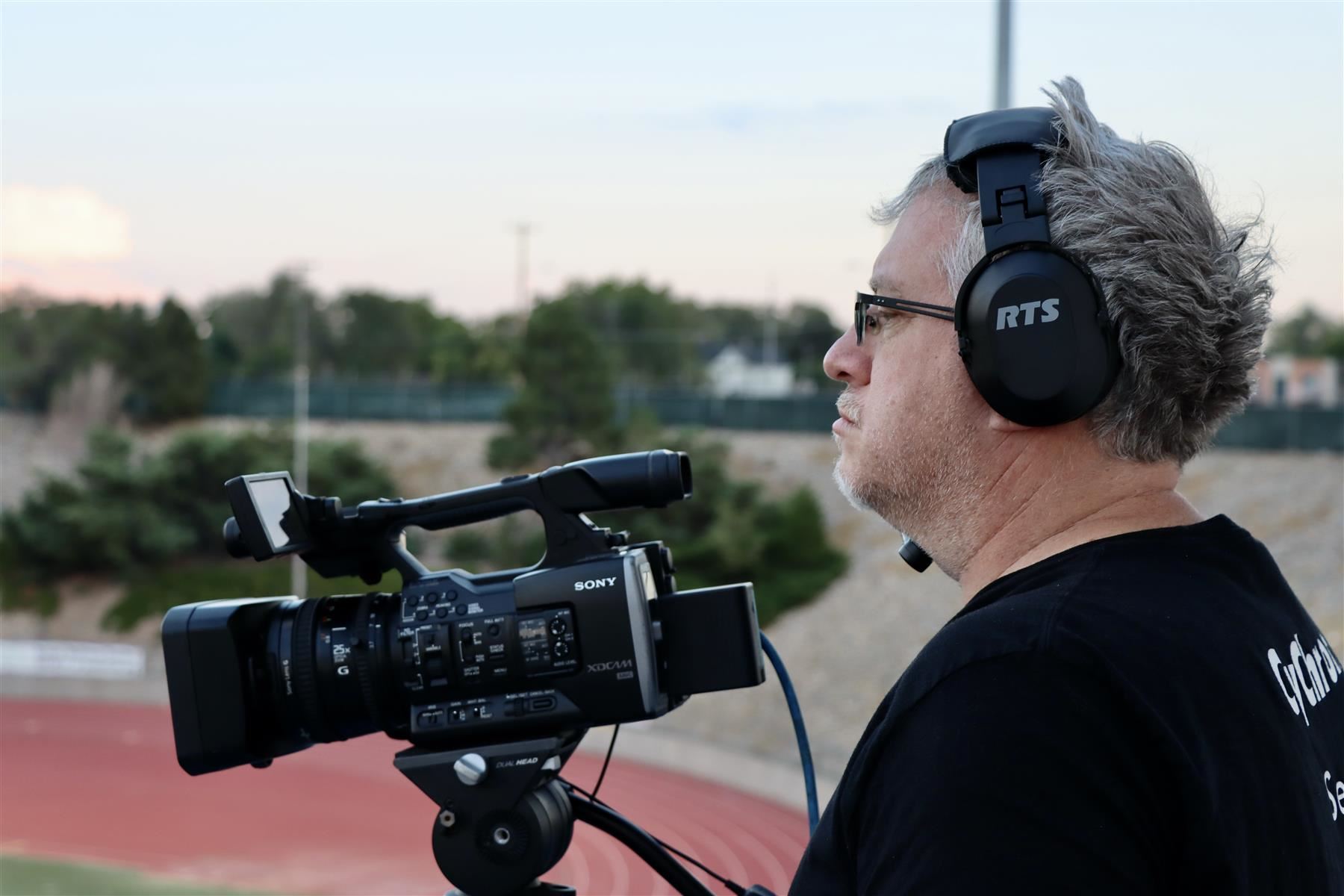 When administrators with Pueblo County School District 70 selected Dutch Clark Stadium, Pueblo District 60’s showcase athletic facility, for the 21st running of its signature rivalry contest The Pigskin Classic, District 60 wanted to not only serve as a congenial host but develop a genuine collaboration that would see this anticipated contest given a first-rate production.

Having successfully produced both the 2020 Bell and Cannon games – allowing tens of thousands of viewers to enjoy the rivalries during the attendance-limiting pandemic -- Donny Rubyal, Supervisor of Digital Communications for the District, aimed for the same professional production for D70’s top rivalry.

And he wanted students from Pueblo West and Pueblo County high schools with an interest in the broadcasting/video production/communications arena to take the lead.

“We wanted to treat this game with the full respect it deserves, and provide for District 70 the Bell or Cannon Game experience,” said Mr. Ruybal, a former educator in video production and communication. “We’re proud to see them play the game at Dutch Clark Stadium, and we hope we can continue to host it.

“Because they are all part of the community, as far as I’m concerned.”

When news of this collaborative effort reached the schools, a number of students enthusiastically jumped at the opportunity to be a part of the Pigskin Classic production unit, working under Mr. Ruybal and Lawrence Ramos, also a member of the D60 Communication Team, while utilizing a cache of state-of-the-art equipment.

With knowledge culled from classroom and lab experience, the Cyclones and Hornets were eager to transfer that know-how into a real-world, big-time setting.

In addition to five camera operators, the Pigskin Classic production unit included a technical director and a host of behind-the-scenes crew members.

The objective was to capture the action on the field, including Band and Spirit Team performances, for live-streaming as well as exhibition on the Jumbotron screen -- while rolling with any punches that can often accompany live production.

“We are really excited about this collaboration,” said Todd Seip, D70’s Public Information Officer. “We’re also very appreciative of the fact that the students from District 70 are getting that next step in their education. Not only did they learn about this in class, now they’re getting the chance to put this on the field.

“To use the cameras, to see what a real game is like and produce that: edit it in real time to get it broadcast in real time. Then, they can go home and watch the result of their video and camera skills. And hopefully, they will learn from this experience, and some will take it to the next level at college and university.”

“It’s a great opportunity for both Districts to come together and put on an event for the community,” Mr. Bravo said. “It’s also an opportunity for District 70 students to work with our Communications Team, who can show them the things we do here in D60. I think it’s a win-win for everybody.” 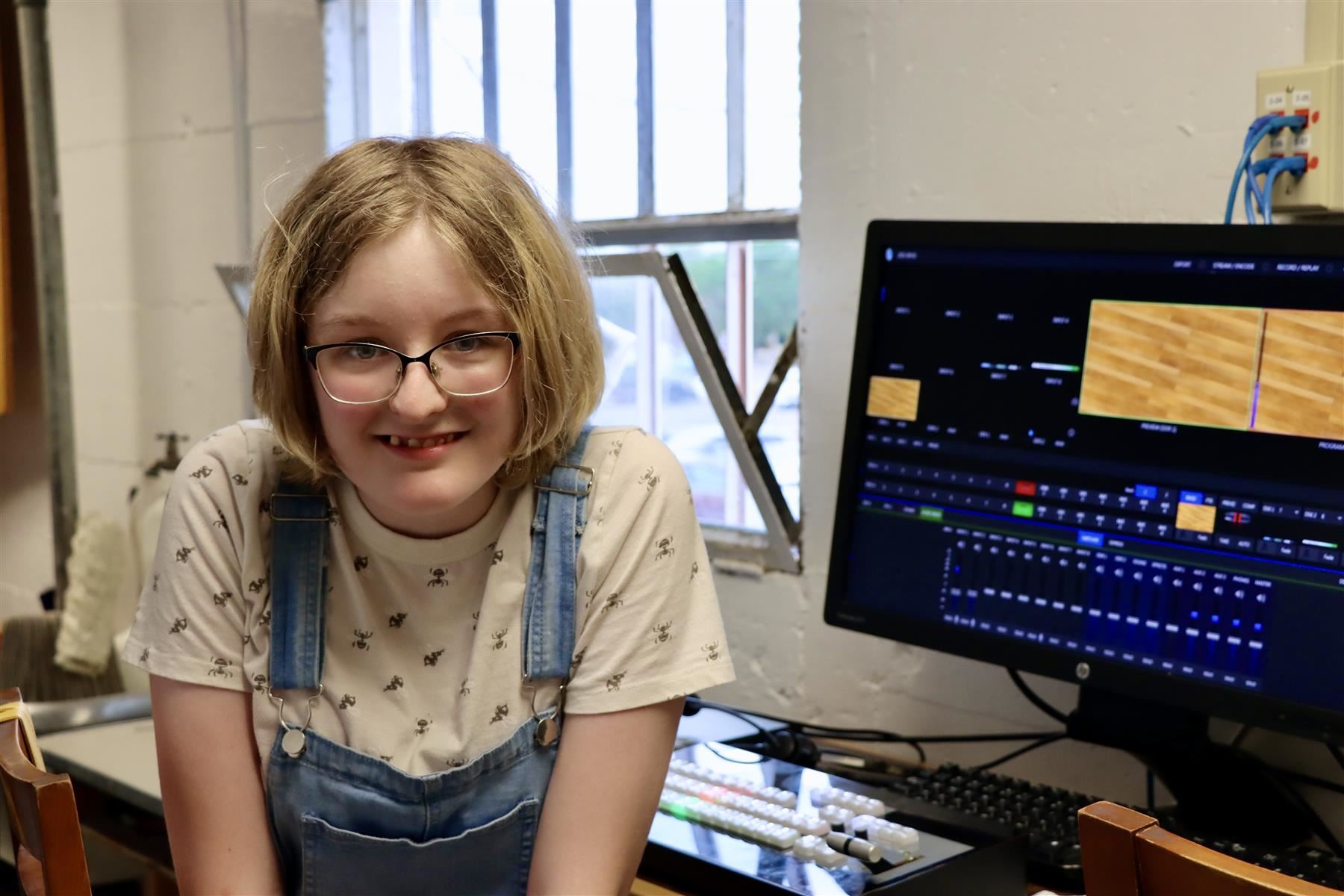 “It’s my job to push the buttons so that we can switch between cameras for the live-stream and occasionally on the Jumbotron,” Audrey said. “And this is my biggest gig yet, because I haven’t yet had an opportunity to work with equipment like this.”

Outside the control room, the team of camera operators paid meticulous attention to the on-field activity – threats of a downpour notwithstanding -- to ensure that no big play went uncaptured.

“I’ve filmed several games at County, but as far as massive events, this is my first,” explained Carter Whittington, a Hornet senior. “It’s been a little chaotic tonight, but overall, it’s been a good time.”

The key to being a competent camera operator, Carter said, is “stable hands. You don’t want them shaking: you want a nice smooth transition. There’s a huge crowd here tonight, but you just have to zone out and focus on the camera and what they’re telling you to do.” 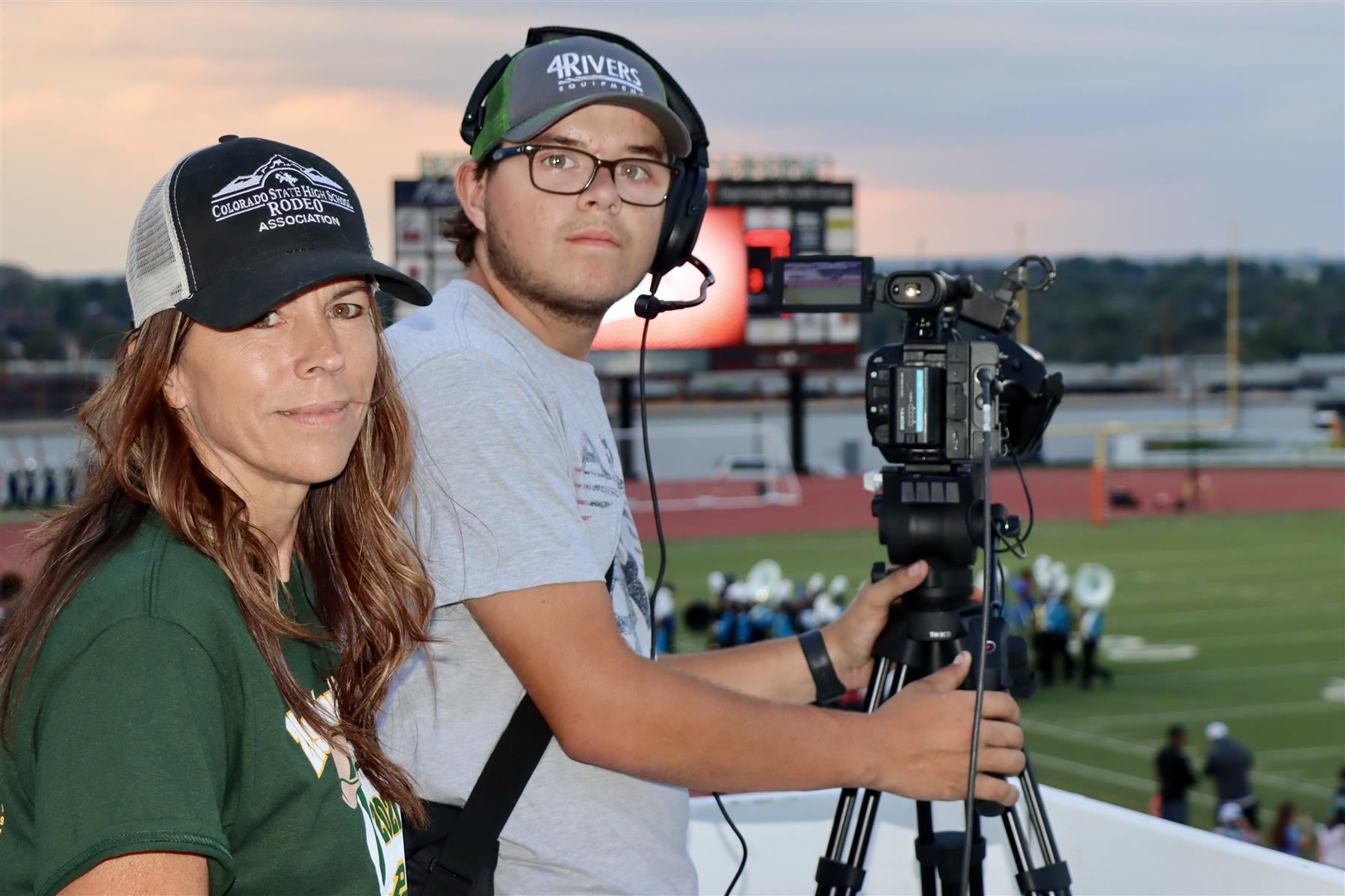 Observing Carter from within the camera perch situated in the grandstands was County’s Academy Coordinator Laura Guardamondo.

“This is really important for all students to take something they are learning in the classroom and apply it to real life,” Mrs. Guardamondo said. “This is stuff we teach within the Academy, but it’s a little different once you’re in the field.”

Dino Allen, a junior at County, has his sights set on a career as a sports broadcaster. As a preview for the coveted position, Dino was readying himself to step into the booth and offer his perspective on the Classic.

“I’ve been helping out in the booth but I’m going in to offer some commentary at the start of the third quarter,” Dino said. “Sports commentating is what I plan to go to college for. And to be in the heat of the action during a big game like this sends chills through your body.

“It feels so important knowing that there are people out here watching their kids, grandkids, nieces, nephews – and people tuning in from all over the country listening to you. It’s nerve-wracking.”

The commentary booth boasted a similar collaboration, with Ben Cason, a graduate of Rye High School, partnering with Trey Graham, an alumnus of South, to provide live-action play-by-play.

The fact that the Classic has halted in the third period due to lightning provided yet another real-world experience for the production team.

Namely, be ready for anything and have the foresight to adapt on the spot. 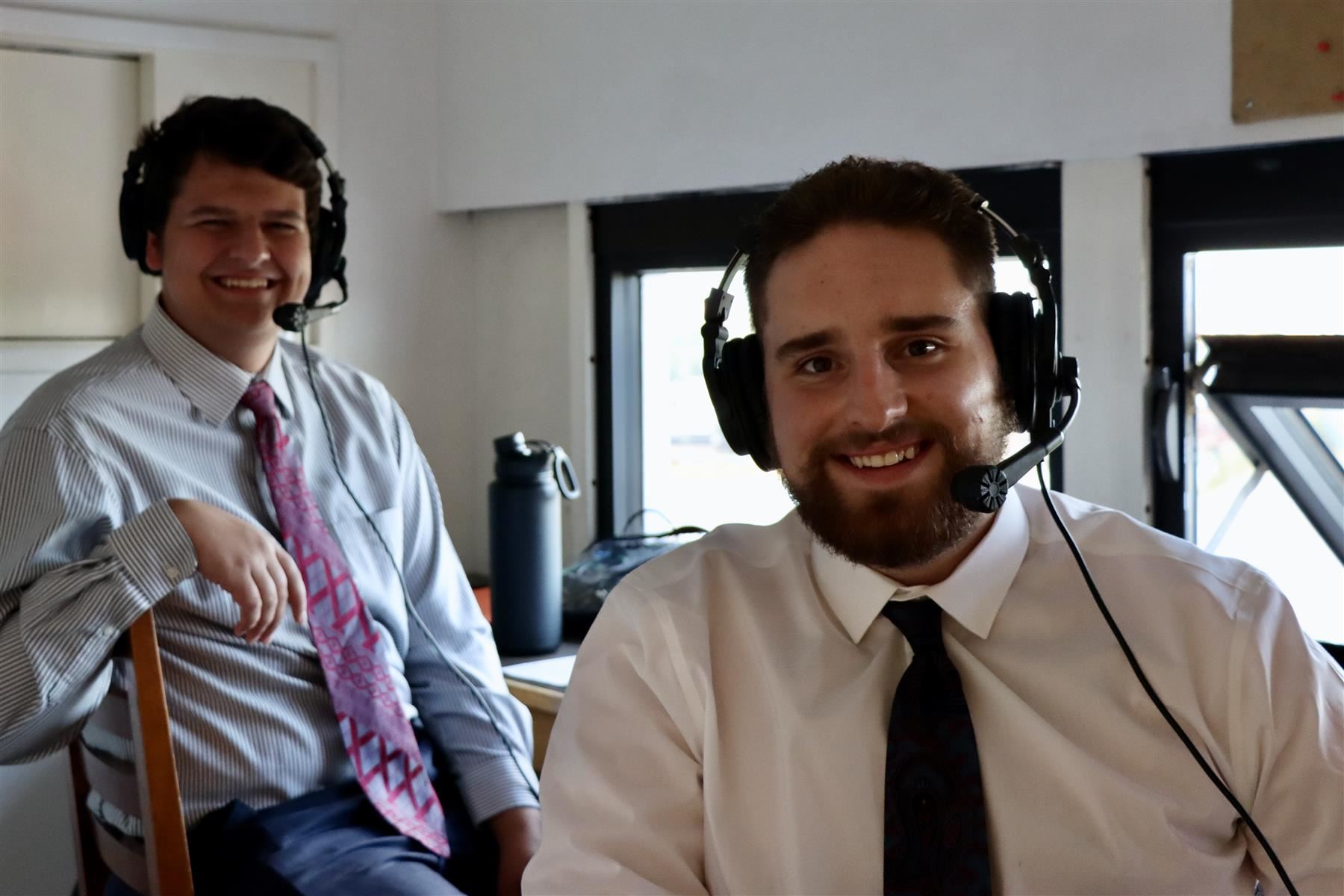