Four sisters, four successful careers, one high school, and a single letter serving as the bow on this festive sororal package.

From 1990 through 2006, the halls and classrooms of South High School were home to five sisters of the Passalaqua family: a name familiar to aficionados of delicious cakes and treats, thanks to the talents of matriarch Aileen Passalaqua and her businesses Aileen’s Cake Décor and Little Bite of Heaven. 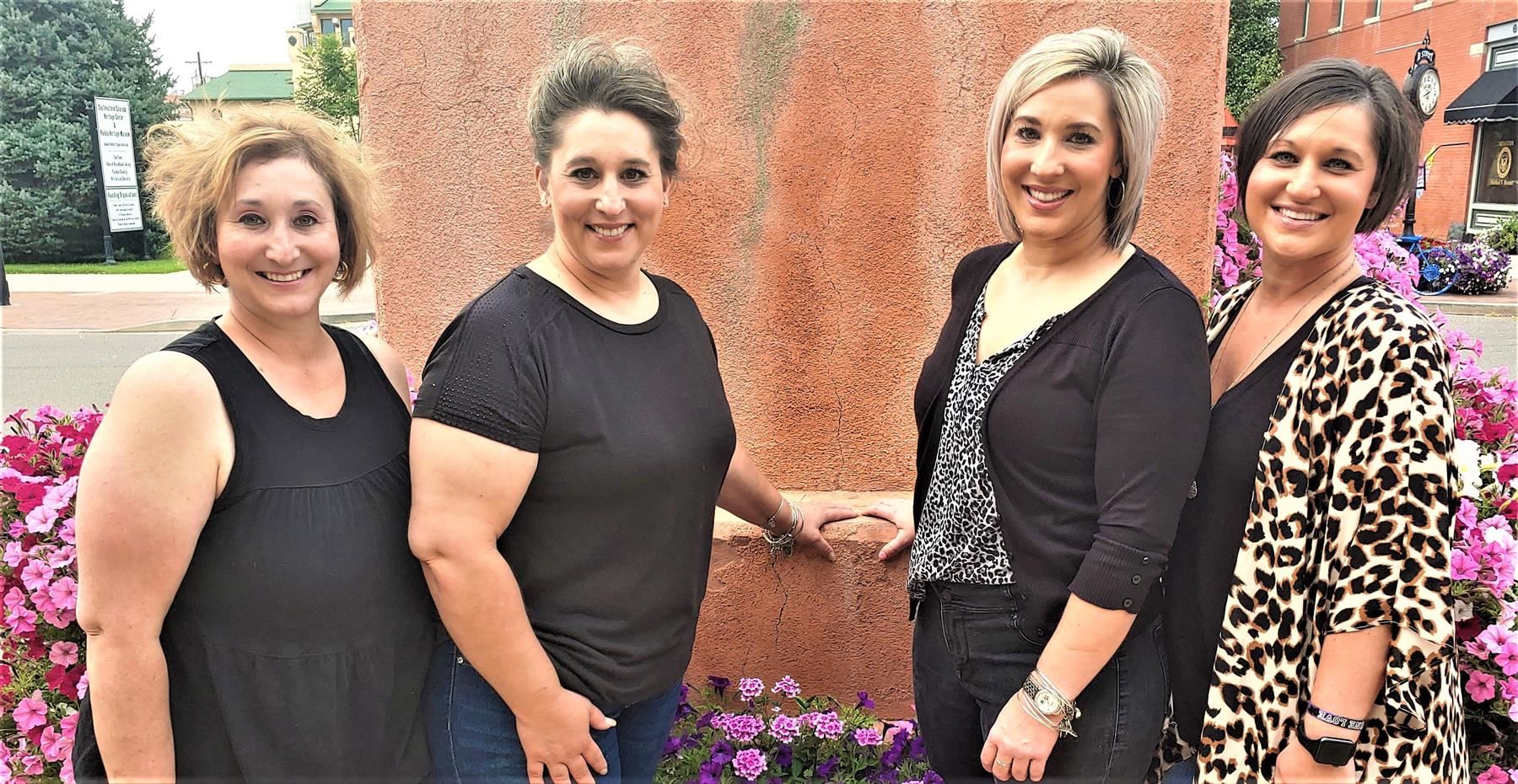 Today, this sweet family legacy is carried on by the youngest of the Passalaqua sisters, Jaelee, a 2006 South graduate who serves as owner and manager of Little Bite of Heaven, a thriving confectionery shop located inside the Union Depot on B Street.

The culinary arts also figured into the career of Janae, a member of the Class of 1994, who went on to establish a successful Career and Technical Education catering and foodservice program at “cross-town rival” East High School.

Two of the Passalaqua sisters, Janelle Bruggerman and Jenna Passalaqua, elected to dedicate their lives to health care: Janelle as a dental hygienist -- now at All Seasons Dental -- and Jenna as Director of Nursing at the Center at Parkwest.

Like the letter “J” – favored by their Mother because she likes the way it looks in cursive – South High School and Colt Nation are inextricably linked to this close-knit sisterly quartet.

Along with the wardrobes passed on with each commencement ceremony.

“I pretty much inherited most of my siblings’ clothes,” Jaelee said. “The fashion was still good, because there are only 2 years between Jenna and I. But there were times going to school and being like, ‘Oh, should I wear this or will I see her in the hallway and then have to go home and change?’”

For Aileen, who raised her 5 girls as a single mother, fashion and footwear provided the most pressing logistical challenges.

"One of the hardest parts of having 5 girls was keeping up on whose clothes belonged to who, and missing shoes,” Aileen said. "It was interesting to watch the changes that took place over the years, having all 5 girls attend the same high school."

With a residence on the South Side, it was the expectation that the Passalaqua girls would attend the home of the Colts.

“It was our neighborhood school,” Janae said. “But South doesn’t run in the family. My Dad went to Central and my Mom to Seton.”

The first to enter the halls of South, Janae was joined by Janelle two years later.

“I had a good time at South,” Janae said. “In my freshman year, I competed on the gymnastics team and I was a Pepperette dancer my junior and senior years. I also was involved in Italian and other clubs.”

Enthralled by Mrs. Garnett’s instruction of Science, Janae decided to major in Biology at the University of Southern Colorado with a goal of becoming a medical professional.

“But when I became a tutor for Upward Bound, that’s when I decided I wanted to teach Science,” Janae said.

With no desire to leave Pueblo once she earned her degree, Janae entered into a contract with the District that required her to accept the first position offered to her by a school principal.

When she learned that her career would start at rival East High School, Janae, in tears, expressed her disappointment to Aileen.

“As a South student, I heard all these bad things about East,” Janae said. “I told my Mom, ‘I don’t think I can do this.’”

Today, one would be hard-pressed to find a more fervent devotee of the Eagle Empire. In a few weeks, Janae will begin her 21st year of teaching at East, where she continues to oversee a thriving and nationally recognized Hospitality and Food Service program as well as the Golden Feather, a school-based student-run commercial restaurant.

“To this day, my Mom reminds me, ‘Remember when you thought you would hate it at East? Now look how much you love it,’” Janae said.

In her junior year at South, Janae welcomed younger sister Janelle, with the two reveling in their sisterly bond.

“We had a lot of the same classes together,” Janae said. “While I was a Pepperette, Janelle was on the cheerleading team. So we were always at games together and did things together.

“And there were other sets of sisters at South, like the Crockenbergs, so we hung out with them. We always had a good time. I remember after football games going to Burger King or Taco Bell to eat.”

“We shared a car,” Janelle added. “And when Janae was a senior and I was a sophomore, I used her senior locker. We were real close in high school.”

Despite the age gap, the younger Passalaqua girls showed solidarity for Janae, Janelle and South by attending athletic contests in mini-cheerleader uniforms crafted by their Mother.

In addition to cheerleading, Janelle was active on Student Council and Italian Club, and to this day, remains in touch with most of the friends she made while a Colt.

“I had a great experience at South,” she said.

“Among the teachers, I’m sure it was a case of, ‘Oh, another Passalaqua,’” Janelle said.

Like Janae, Janelle took to the sciences and set out to become a pharmacist.

“But the college chemistry courses really burned me out,” she said. “So I studied to become a dental assistant at Pueblo Community College.”

After working in the field for 7 years, Janelle applied to a host of dental hygiene schools.

“It’s very competitive and they only accept a certain amount of students,” Janelle said.

After being accepted at a school in Colby, Kansas, Janelle left her beloved hometown for two years of study.

“It was a very small town, so it made Pueblo look awesome,” Janelle said. “And my roots are here – along with my family and sisters – so it was a given that I would move back here.”

With 3 older sisters having paved the way, with plenty of stories and experiences to share, Jenna had a clear picture of what life at South would look like.

“And going to the games and watching my sisters cheer and dance helped mold me as a Colt,” Jenna said. “It made me less nervous about what to expect, but I was still a little nervous when I started at South, because by that time, all my sisters had graduated.”

Like Jenae, Janelle and Janece before here, Jenna immersed herself in the school community, cheering the Colts on for 4 years and participating in DECA, Girls Cabinet and Prom Court.

Upon graduation, Jenna pursued a career as a firefighter, eventually graduating with a paramedic credential before taking the firefighter test.

“It was then I realized firefighting wasn’t for me,” she said. “But because Science was kind of bred into us, I knew I wanted to do something where I could help people, so I became a Certified Nursing Assistant.

“Then I realized I could do more, and that’s how I went on to become a registered nurse.”

For two years, Jenna lived in Canon City while she studied at the Fremont Campus of Pueblo Community College.

“With my family and my Mom’s businesses here, I wanted to be back in Pueblo,” Jenna said. “I like Pueblo: I never ventured far away, just far enough to come back.”

Jenna has worked as an RN for more than a decade, eventually moving into the directorship at the Center at Parkwest.

When Janae graduated from South in 1994, Jaelee had just started Kindergarten.

“As the fifth one, I would always look up to my sisters,” she said. “But I was a little different. Where they were all cheerleaders, I played sports.”

At South, Jaelee discovered that her family’s reputation preceded her.

“I definitely was called every name but mine,” Jaelee said. “So it was ‘Janae, Janelle, Jenece, Jenna…oh, Jaelee.’ Other than that, it was great.”

When Jaelee was a sophomore, and Jenna a senior, the annual rivalry known as the Cannon Game took on a special significance, as Jenae was by this time teaching at East.

“So we decided we were going to prank her every day of Cannon Game week,” Jaelee said. “We put sticky notes on everything, we decorated her car with feathers, we sent her a dead bouquet, and eggs, with a note that said, ‘Don’t count your chickens before they are hatched.’

“That was a fun memory of my time at South.”

At East, where Janae is known to her students as “Ms. P,” her South Side roots are hardly a secret.

A new family tradition of sorts was started at East when Jaelee became an assistant girls track coach and Jenna an athletic trainer.

“It was kind of funny that we were all at East now and not South,” Jaelee said.

With an undergraduate degree in English, Jaelee’s original intention was to follow Janae’s footsteps into the education field.

“But I came to realize that teaching wasn’t for me,” Jaelee said. “It just wasn’t calling my name. So I started working at my Mom’s business Little Bite of Heaven. I was always here and knew the business, but I never was fully engaged.

“I started coming here more and more and before you knew it, I took over the family business. I definitely have worked hard to get it where it is. I feel that we are finally on the map, I guess you could say. It’s challenging, but it’s creative and I love it.”

The Passalaqua girls’ love of their hometown is rooted in the fervent patronage shown by generations loyal to the sweets and treats linked to the family name.

“This town has been very good to our family businesses,” Janae said. “The people were very good to my Mom while we were growing up. She was a single mother who was able to put us all through cheerleading, dance lessons, activities, and she never complained.

“If we needed something, she would just take another cake to decorate and make sure she could pay for what we needed. That’s a big reason all of us feel that we should be in Pueblo giving back, because this town has always been very good to us.”

As for that ever-present letter “J,” Jaelee said there is a simple explanation.

“It’s my Mom’s favorite letter to write,” she explained.

“But go figure, because her names is Aileen with an ‘A,’” Janae added with a laugh.

“She likes the way she writes the letter ‘J,’” Janelle continued. “So when Janae came along, my Mom was like, “What can go with Janae that starts with a ‘J’?

“And that’s how Janelle and the other names came about.”

In her own family, the 10th letter of the alphabet continues its run.

“I’m married to a Josh and I have a Jet and a Jax,” Janelle said.