Always Full of Energy and Optimism, Stephanie Smith is Leaving Belmont on a High Note 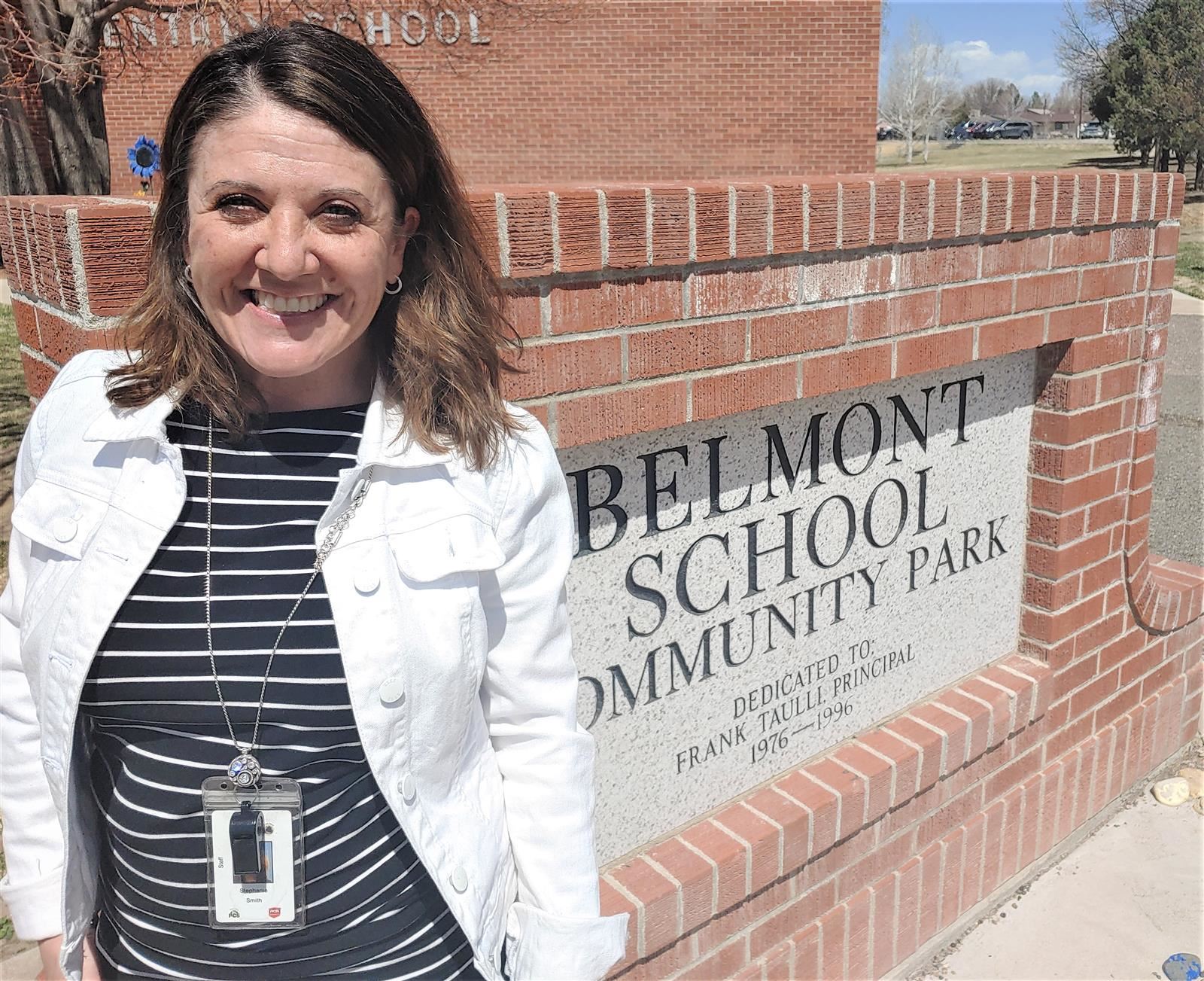 On a wall inside Stephanie Smith’s cheerfully decorated office hangs a hand-made sign that reads, “I don’t have my ducks in a row, I have squirrels…and they’re everywhere.”

The quirky witticism was uttered by the high-energy, always optimistic Ms. Smith to a colleague, who immortalized it on the sign.

Another gift from a colleague is a desk sign that reads “Chaos Coordinator.”

Jocularity aside, both accurately sum up Ms. Smith’s bubbly personality, indomitable drive and, perhaps above all, natural ability to successfully juggle the variety of tasks that come with serving as Principal of Belmont Elementary School.

“At all times, I have 1,000 things going on in my head,” Principal Smith said in her usual exuberant style. “I do a lot of multitasking, and I move really fast. Kids always know when I’m coming, because they hear my fast steps.”

A proud graduate of East High School who has spent the entirety of her 30-year educational career in the district, Principal Smith is, after a 14-year stint leading the Rattlers, retiring at the end of the school year.

“I have loved being a teacher since the day I started and have been blessed to be the Principal of Belmont all these years,” she said. “I am forever grateful for all the wonderful students, colleagues, and families who have touched my heart and been a part of my journey as an educator.”

Small in stature but gigantic in passion, Principal Smith established herself as a natural-born leader early in life.

“I always loved playing school,” she explained. “I had cousins that I would play with and of course, I was always the teacher because then I could boss people around.”

Once her formal educational journey commenced, Principal Smith was just as passionate.

“I loved everything about school: I loved being a student, I loved learning, and I loved children,” she said. “So it was a natural path for me to go into education.”

“Why elementary education? So I could be taller than my kids,” she said with a broad smile. “To this day, I have a running joke with the students here: ‘When you get taller than me, I can’t like you as much anymore.’”

In reality, a fervent desire to shape the lives of youngsters at a critical age was the overriding reason for her selected area of study.

Principal Smith did her student teaching at Highland Park and in the fall, was hired to teach fourth grade at Bradford Elementary.

“Do I remember my first day of teaching? Absolutely, and I have the pictures too,” she said. “I just remember the excitement, and being one of a number of new teachers just starting out at the school. And so many of them remain my dear colleagues and friends.”

“We started teaching together that year at Bradford,” Principal Smith said of Superintendent Macaluso. “We had such a great cohort for all those years.”

Principal Smith spent 7 years at Bradford before moving over to Highland Park for a short time. Then it was back to Bradford to serve as the school’s Media Specialist: an ideal position for someone with a love of books, technology and children at all grade levels.

“It also helped me grow as a leader,” she said of the Media Specialist position. “I had a plan that I would become a teacher and learn by getting as many experiences as I could, so that when I moved up to being a building leader, I would be ready.”

That plan included earning a Master’s degree in Educational Leadership.

“I had been in education about 15 years when the opportunity to apply for the Belmont Principalship opened up,” Principal Smith said. “I applied for that one, as well as the Principalship at Bradford, which also had opened up.

“I sort of anticipated that I would get Bradford, but I ended up at Belmont.”

Although she attended Ben Franklin, Principal Smith was familiar with the school that would become her cherished domain for the next decade-and-a-half.

“I remember my first day as a Principal, and also have the pictures,” she said. “It was a joyous day: I felt blessed because I came into a building with incredible bones. There’s only been 4 Principals at Belmont in 60 years. That’s it. The school culture is amazing because there is such stability in the building.”

Principal Smith’s first day on the job mirrored the hundreds that followed: having a presence in the schoolyard, hallways and classrooms in order to immerse herself in the lives of her students and in turn, their families.

“My goal has always been to have those relationships,” she said. “And I’m proud to say that I pretty much know the name of every child in our school, or who has been through our school, who their parents are and who they are related to.

“I love people and I love kids, so ‘serving and supporting my staff, students and families’ has been my mantra all the way through.”

Throughout her time as Principal, and long before that, Belmont has been a Performance-rated school: an accomplishment Principal Smith attributes in large part to the stability afforded by a staff that loves the school and wants to remain a part of it.

“As far as student success both academically and socially, it’s because our teaching staff, and teaching programs, have been so consistent and stable,” she said. “I think that’s been a true blessing for this school and community, and it’s not that common for schools to have such longevity in their buildings.”

A longstanding source of pride for Principal Smith is the outstanding character of Belmont’s student body.

“Our students are kind and accepting, and striving to do the best they can,” she said. “And our school culture is welcoming. I think that anyone who has walked into Belmont, whether substitute, family member, or child, what I have heard is, ‘It’s just so welcoming.’

“And when people know you want them to be here, and they want to be here, you’re 10 steps ahead for learning and growing.”

As far as the legacy that she will leave behind, Principal Smith’s answer should come as no surprise.

“I’ve been here to love these children, and my legacy will be the joy they’ve brought to me,” she said. “I don’t have kids of my own. I have 3 dogs, so I like to say that I have 3 dogs and 500 kids. I’ve always been blessed to have the children and their families as my family.

“So for me, the legacy is the Belmont family, and the fact that we have given kids a really good foundation and set a pathway for them to have success.”

To sum it up, Principal Smith said she believes she will be remembered for “living, eating and breathing Belmont. It’s always been about my passion for the kids and the ‘whole child.’ Everything we embody is about meeting all the kids’ needs.”

No stranger to the performance stage – she once delivered singing telegrams and acted with a local troupe – Principal Smith plans to pursue her passions in her retirement, while continuing to give back to her hometown.

“At one time in my life, I did have time to do theater and I was an All-State Choir member at East,” she said. “In fact, I haven’t had a lot of time to explore my interests, or even remember what they are, since I became a principal.

“And I want to do more with kids and families in the community, like be a Court Appointed Special Advocates (CASA) volunteer, and I’ve thought about Boys and Girls Clubs. I’m retiring from Belmont, but I believe I have tons left in me, in many ways, and want to be here for the kids in the community.”

Principal Smith will be succeeded by Kylie Felzien, who has spent nearly 20 years, in multiple roles, at Goodnight School.

“I’m so excited, because I think she has a wealth of experience and stability in her school,” Principal Smith said of her successor. “That makes her a good fit. And since she’s twice my height, I’m excited because the kids won’t be able to pass her up, and she won’t blend in as much.”

Julie Naccarato, Belmont’s Media Specialist, has worked alongside Principal Smith for all of her 14 years leading the school.

“She knows this school inside and out,” Mrs. Naccarato said. “And I’ve never seen a principal work as hard as she does. She will be remembered for being caring, with a love for her students. As a leader, she always worked out every problem until there was a satisfactory solution for all.

“It’s been wonderful having her here, and we all feel that this is the best building in the district.”

Although Principal Smith is excited to start the next chapter of her life, she is coming to the realization that when she leaves the school for the final time, it will be a bittersweet moment.

“Leaving the children and my staff is going to be the hardest part,” she said. “I will miss the daily hugs, humor and stories the children share with me, and remain grateful for all the joy my career in education has given me.”

The Rattlers, too, are coming to grips with the fact their beloved, buoyant leader won’t be around forever.

“The kids always ask me, ‘Ms. Smith, are you retiring?’ And I tell then, ‘I’m retiring from being a Principal, but that doesn’t mean I won’t have fun with you kids. I’ll come play at recess any day you invite me, and I can always come back and do lunch duty.’”