On Thursday, Colt Nation honored the Coach Delgado and his athletes for bringing home the 2021 CHSAA Unified Bowling State Championship.

In just two years of official competition, the Colts have established themselves as high rollers of the finest caliber.

The State title capped a second straight undefeated regular season and consecutive League and Region 1 titles. After a third-place State finish in the inaugural year of Unified Bowling, South returned to the Big Show with something to prove in a field of more than 30 teams from across Colorado.

And prove the Colts did, easily outdistancing the Windsor Wizards to secure the coveted State title and add to Pueblo’s reputation as a “bowling powerhouse.”

At State, the Colts were led by the starting trio of sophomore Cheyenne Doreck, and seniors Lorenzo Reyes and Brandon Cordova, with support from Ashleigh Avalos, Donn Dawson, Charles Rucker, Alexis Diaz and Ethan Gallagher.

Coach Delgado, a South graduate who returned to his alma mater as an Exceptional Student Services educator and coach, was praised for his efforts in not only bringing Unified Bowling to South but dedicating himself wholeheartedly to the team’s success.

After learning that CHSAA was designating Unified Bowling as an official sport, Coach Delgado was instrumental in bringing this inclusive activity not only to South but all schools in District 60 as well as those in neighboring communities.

“I thought, ‘What a great opportunity for my students to become involved in a school team sport and represent South,” Coach Delgado said. “And the sport has been so much fun for the kids and me. At practice we laugh, joke and enjoy food from the concession.

"And in games, there is a friendly spirit of competition.”

Coach Delgado pointed out that in two seasons, South is 15-1.

“So as Athletic Director (Jarrett) Sweckard said, we are kind of a powerhouse, you could say. Our only loss came at State last season, which was really disappointing as we had performed so well all of last season,” he noted. “But it really makes me more proud of this team that they met disappointment, persevered and set themselves a goal for the next season.” 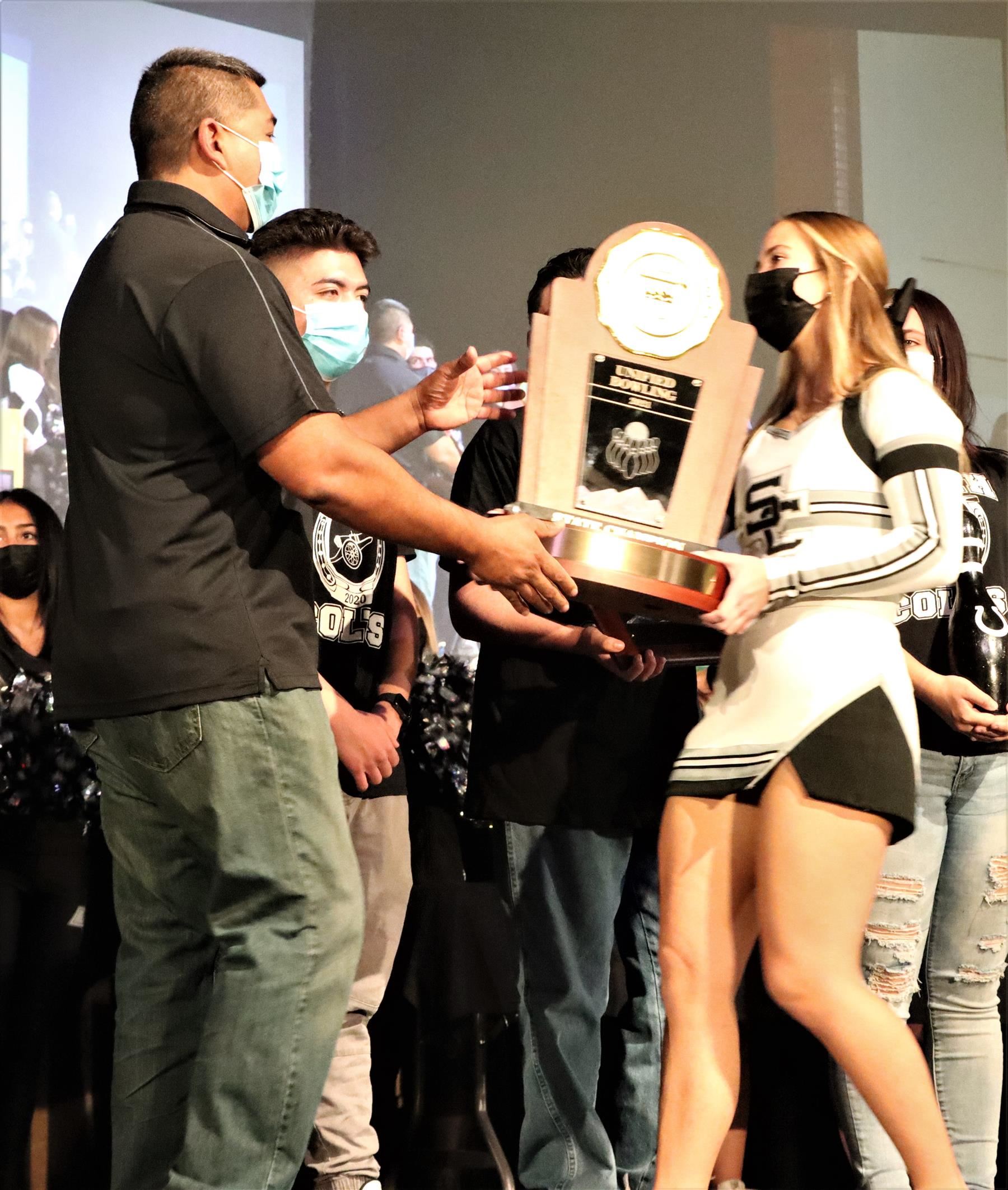 No stranger to the rigors and challenges of State-level competition, South Head Football Coach Ryan Goddard welcomed Coach Delgado and the Unified Bowlers into South’s hallowed Hall of Champions.

Since opening in 1959, South has amassed 25 State team titles: the most in Pueblo sports history.

"And what an accomplishment that is.”

Coach Goddard then thanked Coach Delgado and his bowlers for the opportunity to share in their success.

“It’s an extreme honor for me to be able to celebrate this accomplishment with the members of Colt Nation,” he said. “We are so proud of all of you, and we thank you for your dedication, accomplishments and time: all the work you put in, striving to be as great as you possibly can.”

Earning a State title, and moreso the journey that leads up to one, is “an irreplaceable memory.”

“I was an athlete in high school and college and was never part of a State championship,” he said. “For all the high school athletes out there, this is the ultimate goal. This is what we want to obtain.”

Much of the credit for the State title, Athletic Director Sweckard said, lies with Coach Delgado.

“One thing about Raul: very dedicated, very hard working, a very inspired coach,” he said. “Coach wants the best for his bowling athletes, and you can hear the excitement in his voice when he comes in my office and talks about bowling.

“I would say Raul is a pioneer in the sport of high school bowling and for District 60.”

“I want to recognize Coach and the students here on stage, first and foremost, for the way they represented South High School, Colt Nation and our community,” Principal Kovack said.

Also singled out for praise were the operators of Big Daddy’s Sunset Bowl for providing use of the facility for both practice and competition.

At the conclusion of Thursday’s assembly, Coach Delgado was presented with the spoils of the Colts’ masterful season – Region 1 and State awards, and a black bowling pin with the trademark “Horseshoe” logo – by members of the South Cheerleading Team.

Reflective of the long-time rivalry between South and East, the Colts earned the black pin by defeating the Eagles – the inaugural Unified Bowling State champions – in regular season action.