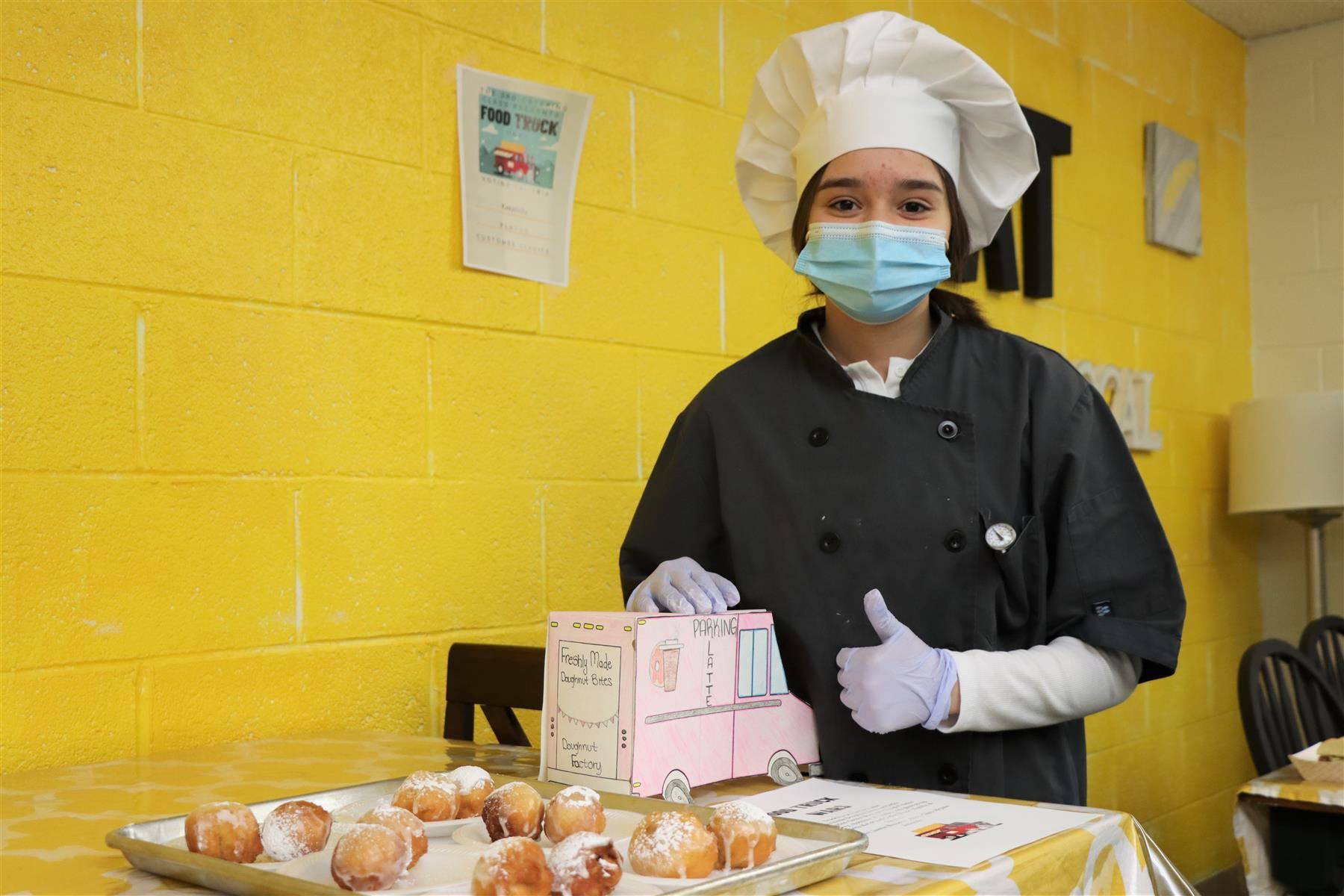 Wednesday inside East High School’s Golden Feather Restaurant, a battle of the most mouth-watering and flavorsome variety broke out.

Taking a cue from reality fare like the Food Network's “The Great Food Truck Race,” third-hour culinary students under the direction of Janae Passalaqua, East’s ProStart and Culinary instructor, squared off for a “Food Truck War.”

For this particular class assignment, Eagle culinary arts students were tasked with creating a mock food truck company that serves real meals. From the name of the company to the facsimile food truck that served as the vote collector to the menu, this savory operation was fully in the hands of the Eagles.

“We’ve always designed ‘food trucks’ and done the menu, but this is the first time we’ve taken it to the next level of a competition,” Ms. Passalaqua said. “I got the idea after attending a CTE conference in New Orleans.”

The food items presented Wednesday were crafted with input from East educators, who filled out a survey indicating what type of fare would be popular.

In this particular battle, the salvos were nothing short of delectable.

In anticipation of the lunch hour showdown, preparations began on Monday, with the Culinary Arts scholars feverishly putting the final touches on the meals up to the arrival of the educator patrons.

“Everybody loves chili cheese fries,” said senior Anthony Montez of Fry Me 2 the Moon. “That’s pretty much the idea behind our menu.”

Junior Sully DeHerrera was credited with coming up with the Pulled Pork Slider offered by CO Kickin’ BBQ.

“I just wanted to make some barbecue,” Sully said. “The secret to a good pulled pork sandwich is a good rub and a good smoker.”

For the price of a $5 ticket, East educators earned the right to sample all of the wares and then cast a ballot for their favorite dish.

As expected, the competition was tight, with all of the offerings earning much deserved praise. 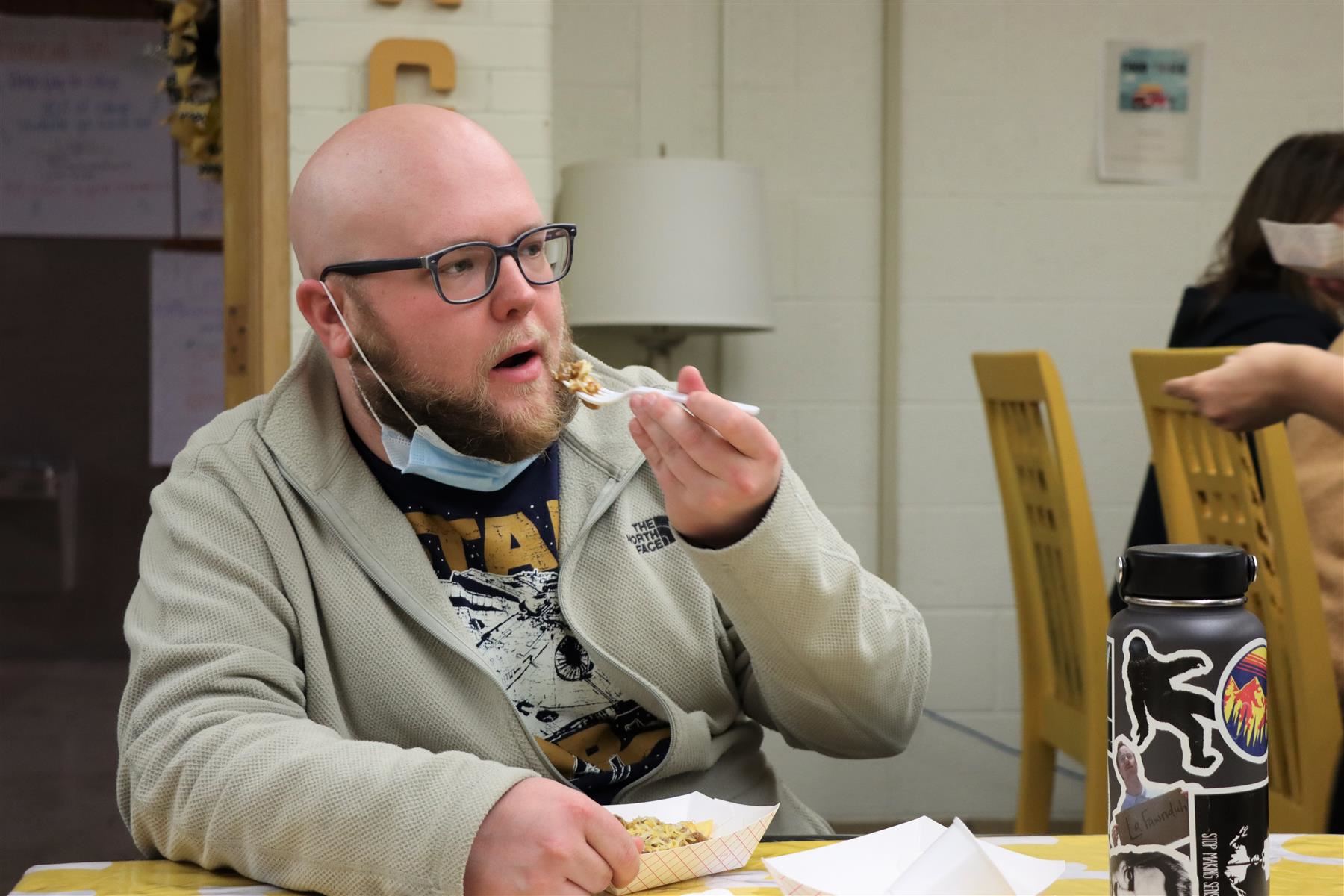 Pulled Pork Slider: “The potato wedges are nice and crispy, and the slaw actually complements the pulled pork. It’s smoked, got a great sauce and tastes great.”

Carne Asada Fries: “The fries are great: nice and crispy. The green chili has a slight spice to it; I kind of wish it was spicier. The meat’s a little dry, believe it or not. But it’s still great.”

Doughnut Bites: “I got one with vanilla and one with chocolate. The chocolate one is really great, with the glaze on the outside to complement the chocolate inside. The vanilla is really good, but not much in the filling. But the dough is sweet and the powdered sugar is a nice touch. Plus it came with iced coffee, which can always be a little bit sweeter.”

Crepes and Smoothie: “The smoothie has an odd consistency: a little tart, a little different. The crepe is really good with the mixture of hazelnut, strawberry and banana works really well. The crepes are a little thick but still tasty.”

In the end, the Green Chile Cheese Fries gathered the most favor of the voting educators, who selected the work of Fry Me 2 to the Moon’s Amerette Ornelas, Anthony Montez, Armando Carjabal and Tyler Brian as the top Food Truck offering.

Next week, the Food Truck Wars will continue, with fourth hour culinary students rolling out their tastiest weapons.

That winner will then square off with Fry Me 2 the Moon for the ultimate Food Truck War title.