VETERANS DAY ASSEMBLY A PART OF EAST LEGACY FOR 15 YEARS 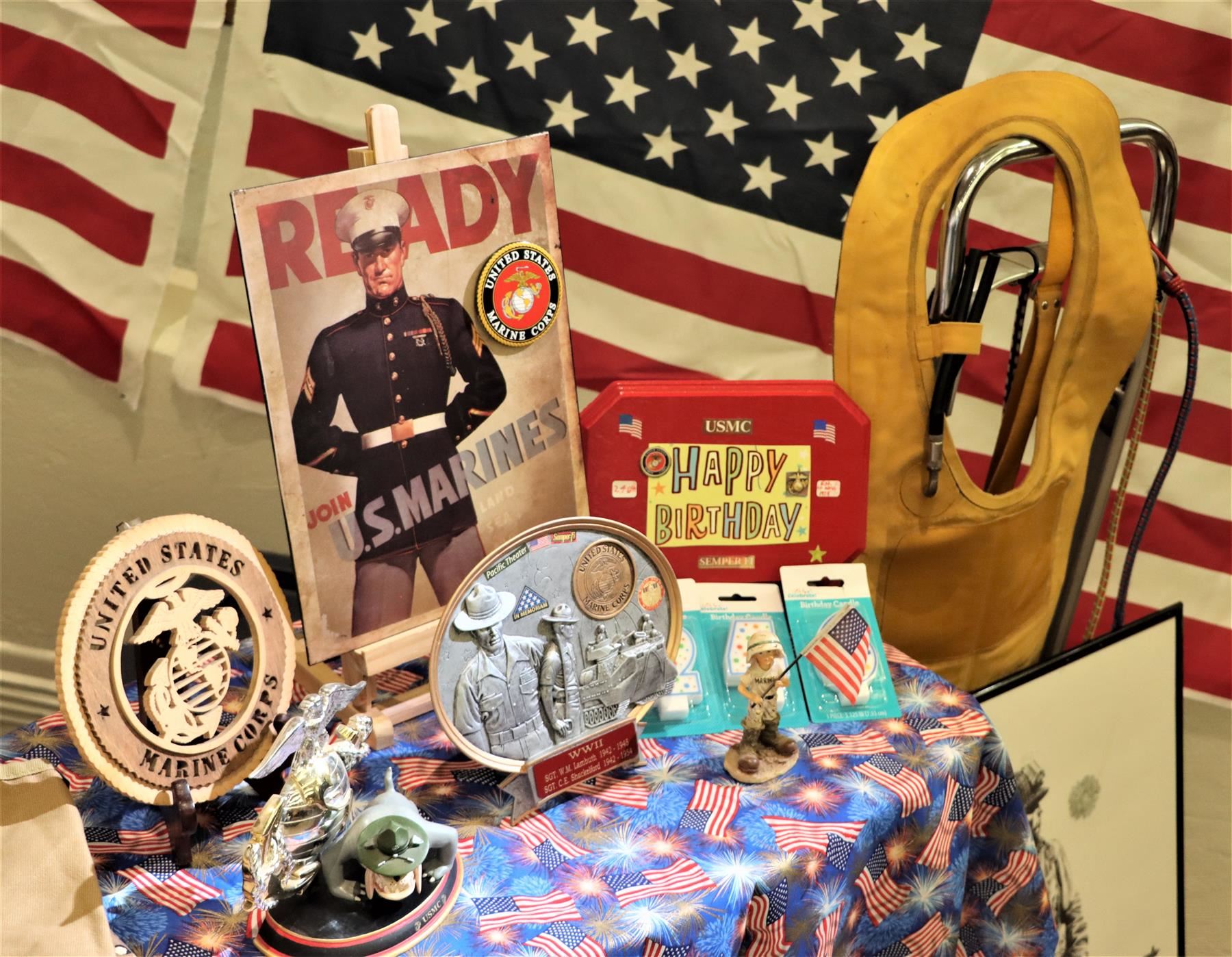 East High School's rich legacy of military service, and the Eagle Empire's continuing gratitude for all who served, once again provided the patriotic foundation for the 15th annual Veterans Day Assembly.

Founded and championed by Marine Corps veteran, American Legionnaire and East educator Ray LeMasters, the poignant gathering provided the East student body with the coveted opportunity to honor veterans in attendance as well as those who paid the ultimate price in the name of freedom.

In that latter hallowed group are 10 Eagles who lost their lives serving in Vietnam from 1959 through 1975: their names emblazoned on a large placard that annually serves as a centerpiece for the assembly.

On a stage draped with American flags and accented by a distinguished row of service uniforms, a display of Marine Corps and World War II mementos, and the ceremonial POW-MIA table setting, the Les Jongleurs offered the National Anthem following the presentation of colors by Eagle JROTC Cadets.

Principal Andy Clementi introduced the host Mr. LeMasters as "a true veteran and a true patriot who makes this event a big priority for his entire department every single year.

"He puts country before all and his students here at East are some of the most important people in his life."

Mr. LeMasters' first order of the afternoon was assisting veteran and fellow Legionnaire CeCe Newman with the solemn table setting ceremony designed to call attention to the tragic plight of prisoners of war and those who went missing in action.

He subsequently recognized the veterans in attendance and bestowed upon Mrs. Newman the 2021 American Legion Post #2 and East High School Service to Veterans Award.

As the “Home of Heroes,” Pueblo has the unprecedented honor of having four of its sons receive the nation’s highest military honor for gallantry and bravery, the Medal of Honor.

“Out of 325 million Americans, just a little over 60 who wear the Medal are still alive today,” Mr. LeMasters told the gallery. “And at one time, Pueblo was home to four living Medal of Honor recipients, which is outstanding.”

One of those recipients, the late Jerry Murphy, was the subject of a presentation culled from the award-winning “Beyond the Medal of Honor” documentary produced by East alumnus Brad Padula.

A retired Air Force Colonel and proud East alumnus, District Attorney Chostner provided a fascinating recounting of his grandfather’s experience during World War I, which included surviving an unprecedented barrage of gunfire that preceded the historic Armistice that arrived at 11 a.m., thus serving as the foundation for what is now known as Veterans Day.

The history that encompasses the two World Wars, and before that the Revolutionary War and the Civil War, “continues to live,” District Attorney Chostner said. “That history is part of us as Americans and the reasons we fight. We don’t fight just to take property or to take land. We don’t fight wars of conquest.

“What we fight for is the ideals we see in the Constitution of the United States. We Americans are different. We are the ones who fight for human liberty, for human dignity: whether it was in the American Revolution of 1776 or the Civil War -- where we fought not just to preserve the Union, but to free people.

“Or why we went to World War I, to help those countries with an authoritarian government. And World War II against Hitler and Korea to stop the aggression from the North. And in Vietnam, it was the altruistic reasons we went to help the people who were in danger of being enslaved.

“And that’s why we went to Afghanistan and into Iraq. We went there to help others so they could have the same kind of freedom that we have.” 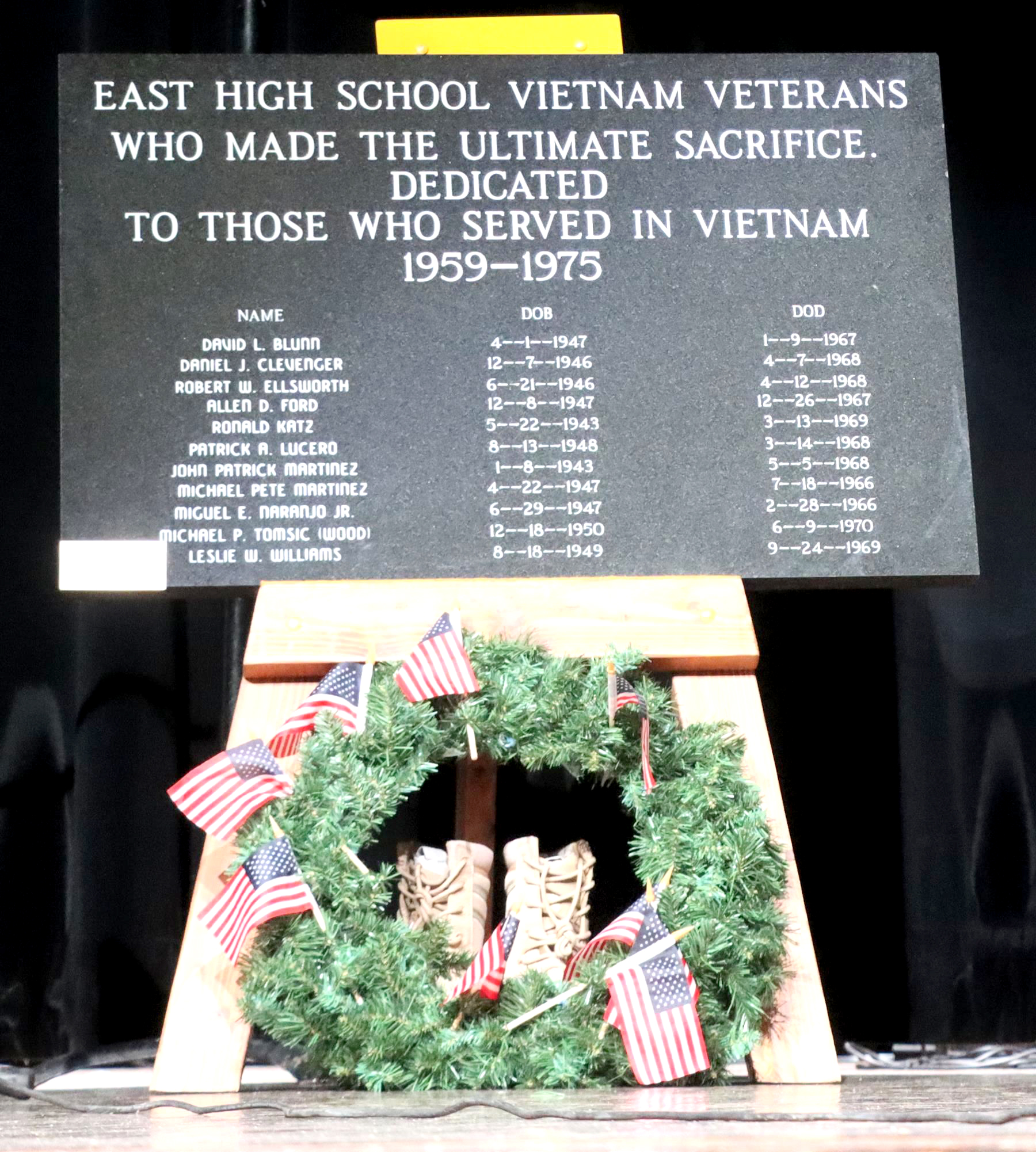 District Attorney Chostner then personalized his words by calling attention to one of the names on the plaque of the fallen.

“When I come to East, I always take a look at this plaque here,” District Attorney Chostner offered. “I didn’t know all of the men who died in Vietnam but I did know one, Pat Lucero, who was a year or two ahead of me.

“He was a rambunctious East Side kid: a good football player and at heart, a good kid. And he volunteered to serve his country in Vietnam. He was killed in the Tet Offensive of March 1968. And I remember the memorial service on this stage as it were yesterday.”

The gathering was brought to a poignant conclusion with the laying of a wreath at the base of the plaque of the fallen and the playing of Taps by two members of the Jazz Band.

In conclusion, Mr. LeMasters encouraged the Eagle student body to pursue the path of the hero.

“You can become a First Responder or become a hero by becoming a teacher: like the wonderful teachers and staff we have here at East High School.”

On Thursday at 6 p.m. at Memorial Hall, the District and its students, in concert with the Center for American Values, will pay tribute to servicemen and women through the sixth annual Pride and Patriotism event.

Honoring veterans through words, song, art and video, Pride and Patriotism will see the District’s scholars express gratitude for the sacrifices made by so many in the name of liberty and a free world.

The event is free and although tickets can be picked up at the District Administration Building, they are not necessary for entrance.