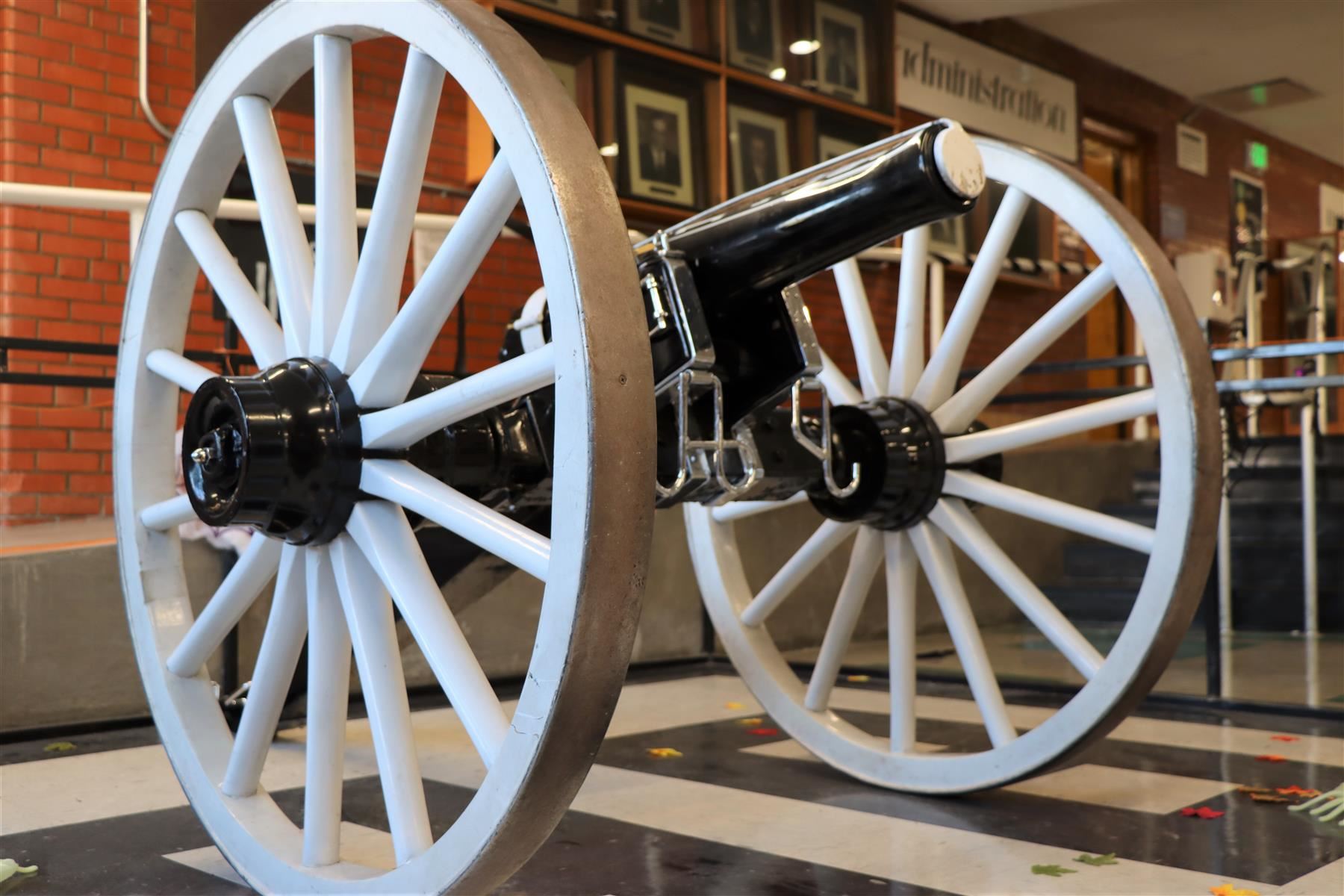 Although the roots of this gridiron contest don’t extend as deep into history as Pueblo’s other storied rivalry, The Cannon Game is as colorful, intense and as well supported as any in the nation.

In this cross-town battle, the South Colts and East Eagles square off for the right to host, for a year, a ceremonial Cannon. This striking armament is painted in the victor’s school colors and, during home contests at Dutch Clark Stadium, fired off every time the holding team finds the endzone.

Although South and East have been squaring off since both schools opened in 1959, it wasn’t until 1976 that The Cannon entered the picture.

The idea of a cannon as a trophy originated with the first president of the South High School Key Club, Scott Williamson, in 1970.

Mr. Williamson wanted the newly chartered organization to purchase a cannon to fire at all South football games. South’s principal, however, did not approve of the proposal and the idea was, temporarily, dropped.

In the fall of 1975, shortly after the South Key Club helped the Steel City Kiwanis Club to organize the East High School Key Club, Kiwanian Lou Lazo asked how his club could best serve the two Key Clubs.

The South sponsor put forth Mr. Williamson's idea of a cannon, with the added proposal that it be passed between the two schools as a trophy in the manner of the “Victory Bell” sought each year by Central and Centennial.

Everyone was enthusiastic about this idea, and Mr. Lazo immediately began working with District 60 administration to implement it.

Later that year, Steel City Kiwanis was successful in locating a Civil War-era cannon in Cedar Falls, Iowa. The cost of the cannon was $800, with each Key Club paying $263 and the Kiwanians covering the balance.

In the spring of 1976, the Cannon was delivered to Pueblo. In the name of safety, it was decided that a new replica of the original barrel would be more appropriate, and one was cast from a mold of the original.

Representatives from Steel City Kiwanis and the two Key Clubs were given a training session in firing “The Cannon” at the Pueblo Boy Scout Center, where the Cannon was held until football season.

In the fall of 1976, South and East High School amiably challenged each other to a gridiron battle for the right to host The Cannon. Contrary to the predictions of the local media, South was the victor, which ensured that the armament would be painted in steely black in its inaugural year as a bonafide Steel City trophy.

Recognizing the historic value of this Civil War-era relic, South students and staff instituted a program of regular maintenance and care. William Trevithick, a woodworking teacher, agreed to carve a new axle to replace one that had been badly damaged, and a machinist was commissioned to make a replacement for a special nut which threads counterclockwise.

South again won The Cannon in 1977, but East secured it the following year and held on to it for the next five.

In the overall landscape, however, South has maintained the upper hand, having earned The Cannon 32 times. That run includes 15 straight victories spanning 1997 through 2011, and wins in both 2020 and 2021.

This year, The Cannon has “boomed Black” aplenty thanks to the Colts’ high-scoring offense and propensity to find the endzone early and often.

East, however, will most certainly have something to say about a third straight victory.

This season, the East defense has been an impressive swarm of aggression, stopping hard-charging offenses in their tracks. And with the ball, the Eagles are no strangers to the endzone: just as South is adept at keeping opponents out of it.

Of note, both head coaches in tonight’s Cannon Game are player veterans of the matchup.

South’s Ryan Goddard and East’s Tony Valdez know, from a first-hand basis, the intensity of the action, and rich history behind it, that unfolds on the turf of Dutch Clark Stadium every year.

Likewise familiar with the pageantry of The Cannon Game are District 60 Athletics/Activities Director Aaron Bravo -- a 1987 graduate of South who served as the school’s Principal for nearly a decade -- and Andy Clementi, who before becoming East’s Principal was an Eagle student and faculty member.