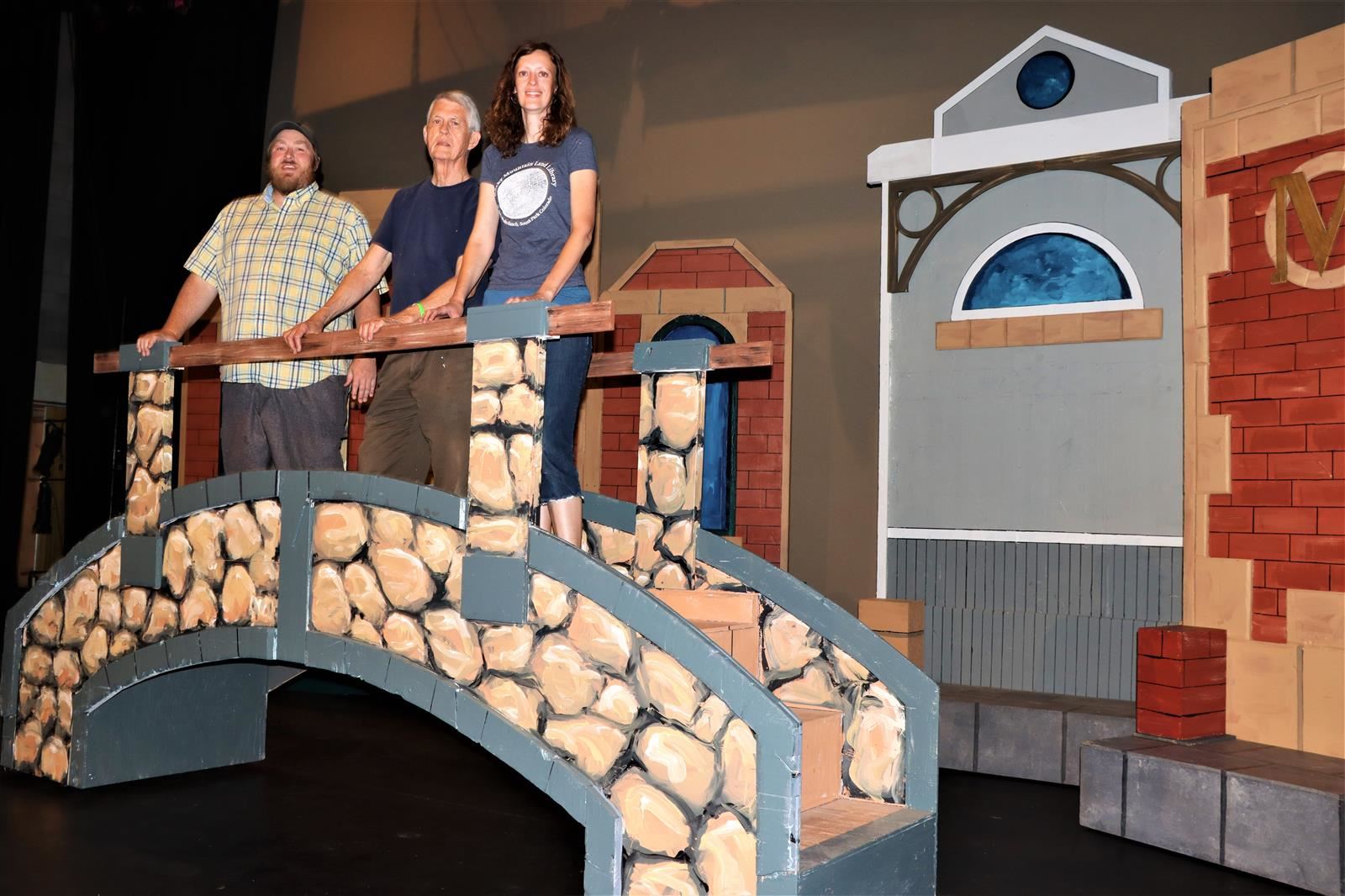 Those who attend the 2022 Pueblo Summer Musical “The Music Man” at the Arts Center will be treated to not only first-rate performances from young men and women but stage sets that bear the mark of true professionals.

At least three times during his long association with District 60 and the Pueblo Summer Musical, local sculptor John Wilbar has crafted sets for “The Music Man.”

An artist whose pieces grace Bingo Burger, the Pueblo Municipal Justice Center and private homes throughout the city and nation, Mr. Wilbar has generously given of his time and talents to ensure that Pueblo Summer Musical be given the professional sheen it deserves.

“In certain productions, I’ve often felt that stage sets are an afterthought,” Mr. Wilbar said. “That’s not the case here.”

Mr. Wilbar’s partnership with the Pueblo Summer Musical dates back decades, when the production was under the direction of Donna Stinchcomb and Wayne Genova, and his daughter Megan was a student at South and performer in the musical.

Also part of those early productions was Jonathan Dehn and Nicolas Roberts, who went on from South High School to become administrators in the District and directors of The Pueblo Summer Musical.

“I began working with Jon and Nick while they were still in high school,” Mr. Wilbar said. “At that time, they were building sets with 1 x 4s and muslin fabric, painting them and then demolishing them after the production was over.

“So I suggested, ‘Why don’t we take foam, cover it with muslin, and then paint over it, so that we can use it over and over again?’”

That process, a bit tedious, began to take its toll on Mr. Roberts, leading to yet another innovation on the part of Mr. Wilbar.

“So we began with the Foamular – a really hard but light foam used in construction,” Mr. Wilbar said. “It comes in 4 x 8 sheets that we can cut and glue together. Some of these set pieces are 6-feet wide by 10-feet high.”

The set pieces that patrons will see during “The Music Man” were repurposed from a number of previous musicals.

“We use them over and over again,” noted Mr. Wilbar.

This time out, Mr. Wilbar was joined in the design process by his daughter Megan, herself an accomplished artist who recently returned to Pueblo after living in New York and Denver.

“Normally, I would build mock-ups and then draw all this stuff,” Mr. Wilbar said. “And we would do everything pre-ordered. This time, Megan came along and we just winged it, and we put all the pieces together inside of three weeks.

“We worked six days a week to get it done. And that’s pretty amazing. When I was working by myself, it would take twice that long.”

“We have a good time working together,” Megan said. “And it’s a nice way to push myself to do something else. And I like the Summer Musical, so it’s nice to see people use the artwork that we make.”

“The Music Man” will feature a trio of three-dimensional main pieces: double-sided to provide maximum visual impact while conserving much needed stage space. There are also “location pieces” for scenes involving a train and bridge.

“And they are very easier to maneuver, which is one of the benefits of using foam,” explained Mr. Roberts, with Mr. Wilbar noting that concrete blocks at the base of the pieces are designed to prevent tip-overs.

“We see what’s going on on stage before we hear anybody sing or do anything,” Mr. Roberts said. “Well-produced sets also add a pretty big sense of professionalism to the show that we’re doing. We don’t want the set to look like something that just got knocked together.”

Added Dalton Sprouse, the District’s Director of Communications, “The students who are involved in these shows appreciate the sets and acknowledge the work that it takes to make them. They get to know Mr. Wilbar and now Megan, an equally renowned artist, and see that people really care about the production.”

In the end, it’s about the elevation of the cast’s expectations.

“I think the kids in Pueblo sometimes feel discounted and we are here to make things better,” said Mr. Wilbar. “We want the kids to feel that they are of value.”

In conjunction with the production, the cast and crew are sponsoring a musical instrument drive. Those with band instruments they are no longer using are encouraged to drop off the items at Montgomery and Steward Funeral Directors, 1317 North Main Street, or Buell Children’s Museum, 210 North Santa Fe.

For lovers of abstract-themed paintings, Megan’s work can be seen at the Blo Back Gallery, 131 Spring Street in Pueblo. She also is preparing for shows in Crested Butte and Denver.