THE BELL IS GOING TO RING FOR SOMEONE ON FRIDAY 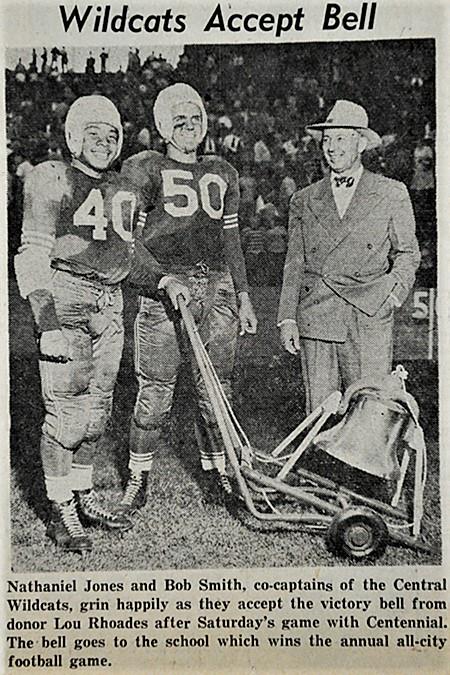 It is the city’s most storied football contest, one of its most popular communal events, and until proven otherwise, the oldest ongoing rivalry west of the Mississippi.

Also referred to as the “One Hundred Year War,” it began on Thanksgiving Day 1892 at Minnequa Ball Park near Lake Minnequa, when the Central Wildcats and the Centennial Bulldogs first squared off on the gridiron.

“The ball had not been in play more than a minute when Marvin made a touchdown for the South Siders (Central) amid tremendous cheers by the Mesa contingent,” reads a Pueblo Chieftain recap of that first game. “Cohn’s try for goal was a failure. Neither team failed to produce any scoring threat after that and the game ended in Central’s favor 4-0.”

On Friday, October 8, the 121st playing of the Bell Game will see the Bulldogs, who will be coming off a big 47-0 victory over Sierra, try to reclaim the Bell from 2-2 Wildcats at Dutch Clark Stadium.

Although the rivalry dates back to 1892 – the year Ellis Island first began receiving immigrants and the first official basketball game was played at the YMCA in Springfield, Massachusetts – it didn’t become the Bell Game until 1950.

That year, Lou Rhoades, a fan of Pueblo high school football, donated a bell from an old C&W Railway Engine to be used as a trophy. The winner of the rivalry would be afforded the luxury of painting the cart that holds the “Victory Bell” with school colors and hosting it until the next playing of the contest.

For the record, Central won that first official Bell Game 40-27.

The introduction of the Bell ended the tradition of the two teams playing twice a year, including a Thanksgiving Day matchup, and led to the once-a-season gala that’s become the cornerstone of Pueblo high school athletic competition.

And with Dutch Clark Stadium fully open for business following 2020’s limited attendance game, one can expect both sides of the historic facility to be flooded with Blue and Red, respectively.

But Bell Game hysteria begins well before the opening kickoff.

From alumni now residing in assisted living facilities to the youngest of football fans, the “Spirit Week” leading up to the contest is filled with school assemblies and rallies, shouts of “Bell Rings Blue!” and “Bell Rings Red,” and similar declarations visible on cars, in front yards and on other canvasses.

In 2019, Chaz Miles, a Central graduate who is now a professional recording artist, recorded a hip-hop song entitled “Bell Rings Blue,” which each year serves as the rallying cry for the Wildcats.

An official video of the song, filmed on the Central campus, continues to attract YouTube viewers, especially when the pre-game hype begins to swell.

Interestingly enough, The Bell Game, and with it the accompanying pomp and pride, was nearly derailed by an on-field melee resulting from a disputed Centennial touchdown.

From the Pueblo Chieftain archives: “There was not the least bit of an excuse for the Central player to use the sort of tactics that he did yesterday. . . When Grant fairly ran behind the goal line, Stewart made a very hard tackle, which twisted Grant into an almost incredible shape. Little Jack Hopkins, thinking that there was dirty work, ran to Grant’s assistance, pulling Stewart off of Grant.

“At this point, Stewart lost the spirit of the game and deliberately hit Hopkins in the face, which almost felled the plucky quarterback. Then Wilcoxin, the giant tackle of the Centennial team, knocked Stewart down with a vicious blow to the jaw. Then the real fight started, and if the platoon of police had not interfered some serious injuries might have resulted.”

Since that time, of course, the rivalry has remained spirited but amiable.

Most recently, not even a global pandemic could halt the playing of the Bell Game, which through the years has featured such luminaries as Wildcat Earl “Dutch” Clark, one of the greats of the NFL: Bulldog David Packard, the celebrated computer magnate; and athletes who went on to play the highest levels of collegiate athletics.

The rich and colorful history of this contest is perhaps best encapsulated in “The Steel City Football Almanac,” a history of Pueblo football written by 1959 Central graduate David Mihalick.

“I’d go down to the library at the Chieftain and look at old newspapers,” Mr. Mihalick told Chieftain reporter Jeff Letofsky in 1992. “Everybody thought the rivalry started in 1921, but I traced it back to 1892 and as it turned out, I discovered it was one of the first rivalries in the state.

“I don’t know when I decided to make a book out of all my findings. It got more and more exciting when I found relatives and friends in the files.”

Having earned the Bell for two years running, Central also boasts the distinction of 58 victories to Centennial’s 53. The longest winning streak is 6, owned by Central, with the Wildcats also claiming victory in the 100th playing of the contest.

On 9 different occasions, the contest has ended in a tie. The first overtime contest came in 2008, which Central won by a score of 22-21.

For the general public, tickets for the Bell Game will be available at both schools starting Monday, October 4. They are priced at $4 for students; $6 for adults; with a $20 family package good for one adult and four students, or two adults and three students.

If you can’t make it out to the Dutch but want to enjoy the rivalry and pageantry, the contest will be live streamed by the District Communications Team via the D60 Facebook page and well as the Central and Centennial Facebook pages.