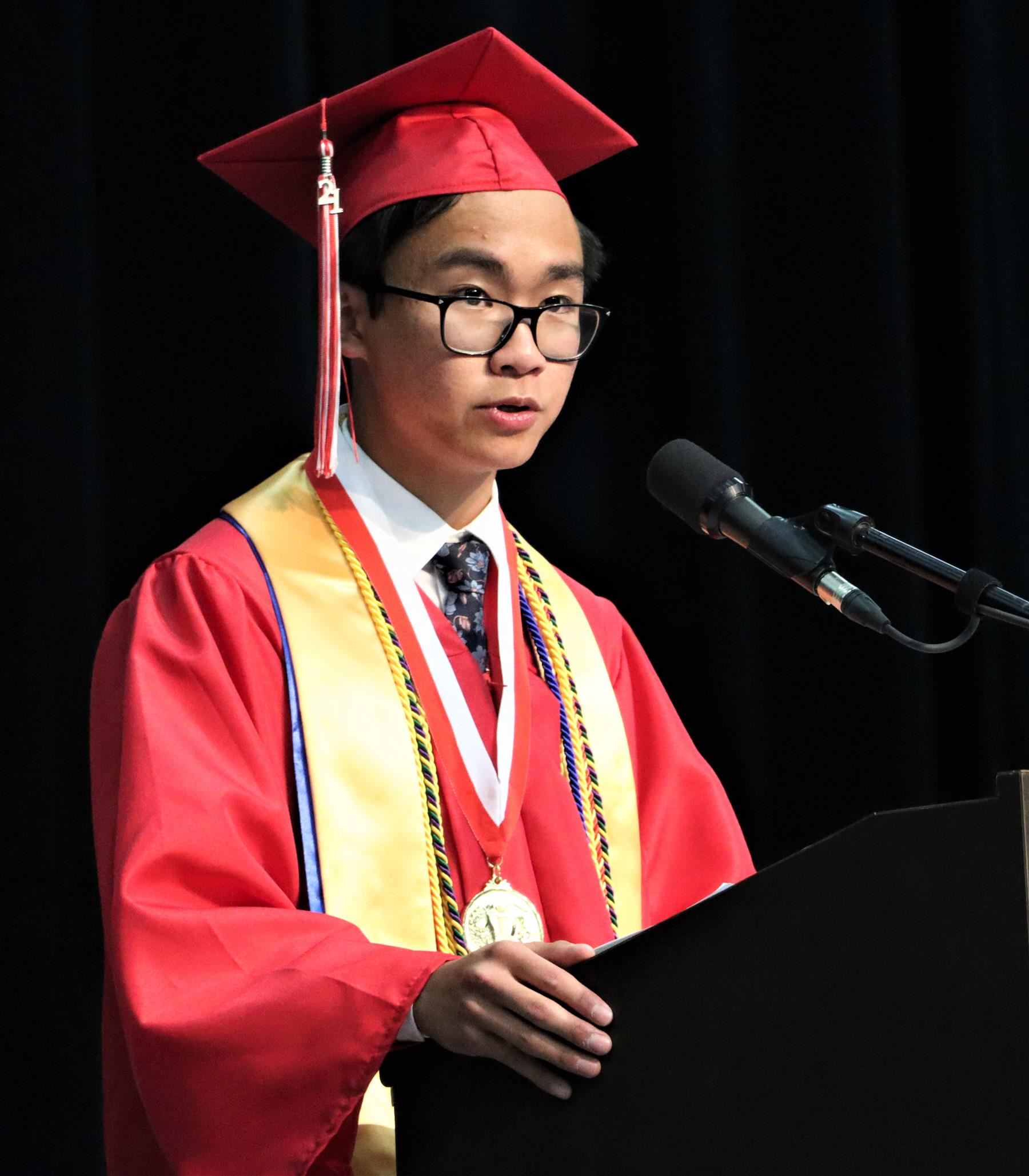 For Andrew Li, a storied career as a Centennial Bulldog came to an appropriately achievement-filled conclusion.

As the District’s top Academic Scholar with a weighted GPA of 4.857 – and a perfect ACT score of 36 -- Andrew not only occupied the First Seat at the annual Academic Excellence Awards Ceremony but led the Centennial Class of 2021 as its Valedictorian.

In addition to being named a U.S. Presidential Scholar semifinalist, Andrew earned status as a National Advanced Placement Scholar, a National Merit Scholar, Carson Scholar and a four-year Hurliman Scholar.

While a Bulldog, Andrew was a high-achieving and active Bulldog with a heart for others.

Andrew excelled in Speech and Debate, serving as President, and three times qualifying for state.

In Future Business Leaders of America, Andrew served as Chapter President and Colorado District 6 Reporter. In state competition, he placed in the Top 4 four times, twice qualifying for nationals.

He also excelled in the athletic arena, lettering in varsity soccer and track all four years as a Bulldog.

Andrew always found time to give back to his community and fellow students.

As a member of the student-founded Bulldogs For Change, Andrew promoted the group’s Kindness Project, raised money to provide a scholarship for a local senior, and took part in toy and coat drives.

In addition to coaching public forum debate and public speaking, Andrew founded and directed the Colorado Speech and Debate Camp alongside nationally recognized students from throughout the state.

As vice-president of Centennial’s chapter of National Honor Society, Andrew helped organize community service opportunities for members alongside organizations such as Rake Up Pueblo and the CSU-Pueblo Honors Program.

Said Andrew, “I’ve always prided myself on my hard work and diligence throughout high school, in whatever I participated in -- whether it be in my studies, in sports, or in activities such as speech and debate and FBLA. Regardless of any setbacks — rounds that I lost, tournaments that didn’t go the way I planned — I stuck with everything I was passionate about, working towards the position that I’m currently in today.

“To have been recognized for my efforts throughout high school with a Hurliman Scholarship, and to be supported as I pursue my future plans, was an incredibly validating and fulfilling experiment, and I’m so thankful to the Hurliman Family.”

In the fall, Andrew will begin his studies in Computer Science at the highly regarded Stanford University in Northern California. His goal is to research the ways that society can utilize Artificial Intelligence and technology to improve the plight of mankind.

He will, however, remain a Bulldog for life.

“Centennial was so important to me, not only in receiving the Hurliman Scholarship, but also in developing as a student and a person,” Andrew said. “Beyond providing me with an outstanding education, Centennial exposed me to such a great community of people and mentors that guided me all throughout high school.

“The students I’ve been surrounded by have helped me expand my perspectives and have been an invaluable support system while I tried things I might not have otherwise had the confidence to do. They helped me learn not to be deterred by failure, learn the value of diligence and hard work, and ultimately learn the skills and qualities that are currently directing everything I do today.

“I’m forever going to be grateful of the time that I spent at this school.”