For One Young Man, United Way Mentoring Program Proved to be the Difference 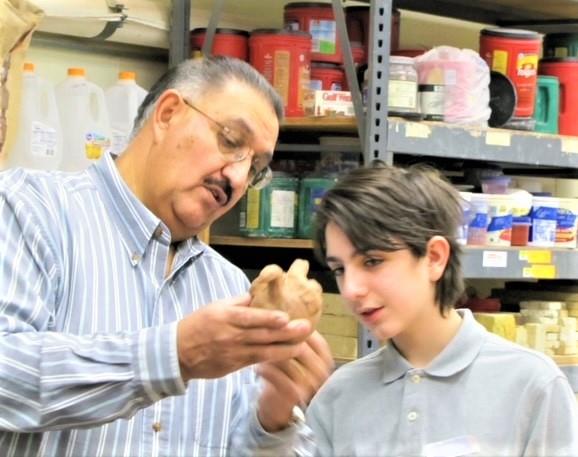 When Fred Arellano first stepped into the life of young Ukiah as a United Way mentor, the Heaton Middle School sixth-grader was, to say the least, struggling.

On his first visit with Ukiah, Mr. Arellano learned that Ukiah’s report card was littered with Fs and his school attendance was spotty at best: an indication that Ukiah would greatly benefit from the consistent source of support and guidance afforded through the United Way of Pueblo County’s middle school mentoring initiative.

“When I met with Ukiah 10 years ago, I immediately sensed a strong bond between us,” Mr. Arellano explained. “He was personable and open, and it didn’t take long for him to gain my trust.”

From the outset, Mr. Arellano realized that Ukiah was lacking a strong and caring male figure in his life: a significant factor in the child’s ongoing academic struggles.

“He shared with me that he was having difficulty adjusting to a change from grade school to middle school,” Mr. Arellano said. “He didn't want to attend classes and was failing in all of them.”

Gently but consistently, Mr. Arellano encouraged Ukiah to apply himself to his studies in order to improve his grades. Their visits were complemented by a warm lunch, courtesy of Mr. Arellano.

“That was something Ukiah really appreciated,” Mr. Arellano said.

But Ukiah also had to provide something for his mentor: a weekly status report that detailed his progress, or lack of it, at school.

“I was always sure to ask him if there was anything I could help him with,” Mr. Arellano said. “Ukiah seemed to appreciate the fact that I was challenging him to improve.  I would praise him when he was doing well but would also make him aware of my unhappiness when he wasn't.

“Through it all, I assured him that soon, he would see that things would get easier.”

“Ukiah's Mom would often times call me and ask me for advice if she was having difficulty with him,” Mr. Arellano said. “And I would offer it.”

As Ukiah was very involved in band, he would invite his mentor to performances and concerts.

“I always attended and he was always thrilled to see me there,” Mr. Arellano said.

In addition to the weekly meetings at the school, the two kept in touch through frequent phone calls, especially during winter and summer breaks. And Mr. Arellano was always sure to mark Ukiah’s birthday and Christmas with a small gift.

“I did this to show him I was there for him and I cared about him and his success,” Mr. Arellano said.

Slowly, but most importantly consistently, Ukiah began to rise out of the academic doldrums. By the eighth grade, he had made his school’s honor roll, even posting a perfect 4.0 GPA one semester.

Although the mentorship officially ended once Ukiah left Heaton for East High School, Mr. Arellano was not willing to sever the enriching bond he had worked so hard to establish.

“I continued meeting with him and attending his concert functions during his high school years,” Mr. Arellano explained.

It was a simple but impactful measure that inspired Ukiah to continue on the upward trajectory Mr. Arellano had helped facilitate.

After graduating from East High School in 2019, Ukiah went on to Colorado State University Pueblo, where he is a freshman studying cybersecurity.

“For me, mentoring really helped me out during a hard time,” Ukiah said. “Being able to talk to Fred about anything was wonderful! He kept me on the right path and gave advice from experience I just didn't have. Honestly, if I didn't have the mentor program I probably would have failed middle school or at least been held back.”

To this day, Mr. Arellano and Ukiah remain close.

“I still keep in contact with Fred,” Ukiah said “We check in on each other and just having great conversations. I truly don’t think I would be where I am today without him helping me through all I have been through.”

As National Mentoring Month comes to a close, it’s a fitting time to consider joining the selfless and dedicated mentors like Fred Arellano whose impact on the lives of at-risk Pueblo School District 60 students can never truly be calculated.

“Growing up, I had many friends that were having issues, and it was often due to having problems at home: usually, a lack of parental support and attention,” Mr. Arellano said. “This pattern seemed to be perpetual, and I have always had a soft spot in my heart for these kids.”

While serving on the board of directors for the now-shuttered El Pueblo Boys and Girls Ranch, Mr. Arellano received first-hand insight into the tragedy that resulted from abuse or an absence of parental guidance and support.

“So when United Way offered me the opportunity to be a mentor, I felt that maybe I could help make a difference in someone’s life,” he said.

Although Mr. Arellano is not currently serving as a mentor, he continues to keep in contact and support those he did mentor, including a young man named Nolan who is now in high school.

The United Way of Pueblo County mentoring initiative dates back to 2012, when a pilot program aimed at pairing nurturing adults as positive mentors to sixth graders was launched at Heaton Middle School.

Currently, students from Heaton, Pueblo Academy of Arts, Roncalli STEM Academy, and Risley International Academy of Innovation are taking part in the initiative.