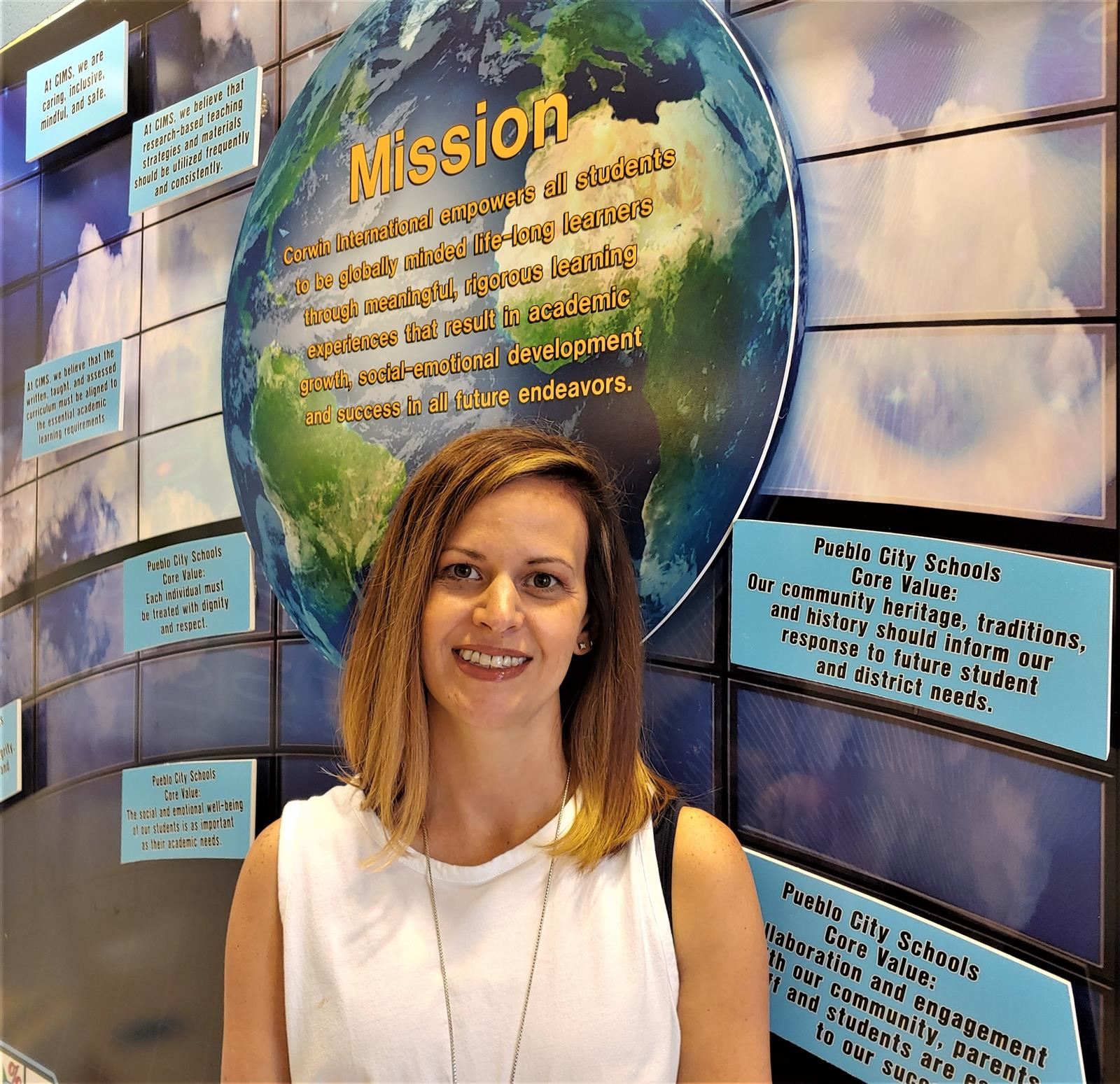 As the saying goes, “You can take the girl out of Pueblo, but you can’t take Pueblo out of the girl.”

Which, in hindsight, turned out to be a very fortunate thing for the hundreds of Corwin International Magnet School scholars and their families positively impacted by Ryan Masciotra.

Mrs. Masciotra is product of Pueblo School District 60 and a graduate of South High School, where she was a cheerleader and active in school activities. Upon graduation, she headed for the sunny climate of Southern California, where she attended California State University-Long Beach.

“I just wanted to explore something different,” she said of her move to California. “I pursued an English degree, because I had high hopes of being in broadcast journalism.”

As part of the journalism program, Mrs. Masciotra was required to engage in internships at several Los Angeles high schools. It was during this time that she began to shift her focus from journalism to education.

“I began to think back on how my own teachers had impacted my life,” she said.

After earning an English degree, Mrs. Masciotra was debating whether to continue her education when she learned the Los Angeles Unified School District was hiring.

“So I started an alternative license program and started teaching English in South-Central Los Angeles,” she said. “And after that, I never looked back.”

As a first-year educator in the heart of the city, Mrs. Masciotra said her experience in the classroom differed greatly from her time as a student in Pueblo.

“It was a very, very interesting experience,” she said. “It was a much bigger school: we had 3,000 students. One thing I learned there is how important relationships are for getting places with your students. If they can trust you, and you can meet them where they’re at and show you care about them, they will work hard for you, and be upfront and honest with you.

“And in turn, you will accomplish a lot more.”

After 3 years in the L.A. Unified School District, the allure of her hometown began pulling on Mrs. Masciotra’s heartstrings.

“At some point, you think about setting down, starting a family and things like that,” she said. “I also had a lot more opportunity here, being closer to family, with the cost of living much less than it is in California.”

After a year in Academy School District 20, Mrs. Masciotra began her association with District 60 in 2007 by taking an English Language Arts teaching position at Roncalli STEM Academy.

“I discovered that middle school is where I belong,” she said. “And it’s where I’ve spent the majority of my 18-year career. It’s a very unique age. They want their own boundaries and space, but they want to know that you are on their team and are going to be their cheerleader.”

In District 20, Mrs. Masciotra taught at Discovery Canyon, which is an International Baccalaureate School: a fact that would play a pivotal role in her District 60 future.

“Everything about IB made me love teaching even more,” she said. “It helps students understand the bigger ‘why’ of what you’re teaching. The things you read, and the things you write about, have a bigger purpose.

“The year I was at Roncalli was when they announced that Corwin Middle School was closing and was reopening as (grades 4-8) IB school. So I knew I just had to come here.”

During her 4 years as an English Language Arts teacher, Mrs. Masciotra took advantage of several district-offered leadership programs, including the National Institute of School Leadership. Having earned a Master’s degree while at Roncalli, Mrs. Masciotra complemented it with a principal’s license.

“The spring before Corwin reopened, the initial staff that got hired had a lot of planning meetings together, to be really intentional about what the new school would look like: what kind of commitments would we be making to the families and the community,” she said.

“It was really exciting to be part of that process and you become really invested: it’s not just a job that you show up to. You believe in it with your whole heart and you want to see it succeed. So as the years went on, and believing Corwin is a fantastic opportunity for kids, I really wanted to continue making this a great place.”

In 2010, Mrs. Masciotra was given the opportunity to be trained by the International Baccalaureate Organization. Through that experience, “I learned that I really enjoyed helping build professionals to do their job better,” she said. “So while I really enjoyed being in the classroom with kids, I also realized I would make a bigger impact if I could lead the adults to do a quality job.

“In turn, that would impact more kids than I could impact in a classroom.”

And so in 2012, Mrs. Masciotra left the classroom to become Assistant Principal.

“You learn a lot working for other school leaders,” she said. “Our founding principal was Julie Shue, and she was still principal when I was AP. You learn so much watching the enthusiasm and passion for what’s happening. And I started to get a taste for that.

“But it could go either way: you could see that and say, ‘I’m glad those aren’t my decisions.’ So when Founding Principal Shue left, I started entertaining the idea that maybe it was my time.”

Now in her fourth year as principal, Mrs. Masciotra characterized the position as a “very complex and dynamic role. There are some things I never anticipated happening: a school year like this one is a good example. But there are also things and moments – with your team and students and being able to connect with families – that can never be replaced.”

As Corwin’s leader, Mrs. Masciotra builds on the foundation she discovered during her first years of teaching in Los Angeles.

“Relationships matter: whether it’s the people you’re asking to work alongside you, or work for you, or the kids you’re asking to follow rules that may or may not make sense to them,” she said. “I also think knowing and being able to stand on what you know is best for kids and adults – and what makes for a productive environment – is equally important.”

Not only is Corwin celebrating its 10th straight year with an IB designation, the school has, for the third straight time, been honored by the Colorado Association of Middle Level Educators as a Colorado Trailblazer “School to Watch:” a three-year designation based on a written application that requires schools to show how they met criteria that includes Academic Excellence, Developmental Responsiveness, Social Equity, and Strong Organizational Structures.

“We’re the only school in the state to be recognized for 9 consecutive years,” Mrs. Masciotra said. “Through different cycles, and with things always changing within the community, we’ve been able to maintain our school culture: when people walk into the building, they’re welcome here.

“Every student – regardless of background, academic level or other circumstance – knows that this is a place where they can be themselves and where they are going to learn and grow, and be ready for whatever is next for them.”