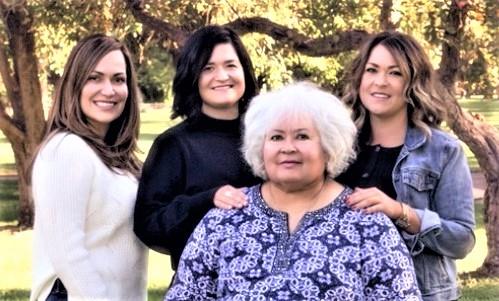 When she was just 7, Morganlee Kempf lost her father to cancer, leaving her and 3 siblings solely to the care of their mother, Martha Martinez Kempf.

Although this life-changing tragedy presented many financial and other hardships for the family, Mrs. Martinez Kempf refused to let her children’s growth and development – and in turn, their futures -- be hindered.

Because Mrs. Martinez Kempf herself knew the hard-knock road all too well.

“My Mother’s first job was washing dishes, at 75 cents an hour,” Ms. Kempf said. “She then paid her way through Catholic school by cleaning classrooms.”

With assistance from a National Student Defense Loan, Mrs. Martinez Kempf put herself through college, becoming the first in a Hispanic family of 13 to earn a degree.

She eventually paid back the loan from her wages as a teacher serving students in lower socio-economic schools.

Her Mother’s perseverance and unbreakable spirit left an indelible impression on a young Ms. Kempf.

“My Mother instilled in us the power of education, and that one’s character should be defined by integrity and honesty, not by circumstances,” Ms. Kempf said.  “Her dedication and commitment to education developed from a very young age, and carried forward to her children.”

Today, one of Mrs. Martinez Kempf’s children is a doctor of nursing. Another is a nurse and a third a welder: all with successful and thriving careers.

And after a career dedicated to the children of District 60 as an educator and administrator, Ms. Kempf is now Principal of South Park Elementary.

Being entrusted as the successor to Lynne Brunjak in leading this vibrant school is a testament to Principal Kempf’s unquestionable resilience and work ethic, and a fitting tribute to Mrs. Martinez Kempf, who served as a faithful guide and role model for her children during times more often trying and discouraging than promising.

“I am thrilled and excited for this new journey and eager to join the Cougar family, where the outgoing principal, Lynne Brunjak, set the stage for success,” Principal Kempf said.

In her own life, that proverbial stage was set by Mrs. Martinez Kempf.

“I credit my Mother for placing so much importance on continuing education, as well as her perseverance,” Principal Kempf added. “She had all the odds stacked against her, but it was her dedication to education that changed her life.”

And the lives of her children.

But not without years of sacrifice and struggle.

“I would describe my elementary school career as being a ‘frequent flyer,’” Principal Kempf said. “I attended several elementary schools as my family sought to find stability, with Mother working multiple jobs and always having to find places for us to live.”

At Heaton Middle School, Principal Kempf found her footing, with the stability of the school community providing a much needed blanket of support.

“Heaton is where my roots in the school system were grounded,” Principal Kempf said. “Here, I built and maintained life-long relationships with friends that are my family today.

“This time in my life was the turning point to my success, because I finally felt a sense of belonging. And I credit that to several inspirational teachers.”

Principal Kempf singles out Mrs. Butler, a Heaton volunteer with whom she sold donuts with every Thursday morning, and Mrs. Palaro, who encouraged the shy young girl to step outside of her comfort zone and serve as Heaton’s “daily news anchor.”

“It was Mrs. Sherman who praised me for my efforts in English Language Arts, and Mr. Moore, who was and still is a phenomenal science teacher, who inspired my interest in Science,” Principal Kempf said.

With this interest, Principal Kempf found the Centennial-based Health Academy a natural fit. From her home school of East High, Principal Kempf attended the Academy and also did work at Pueblo Community College, which opened her eyes to an educational life beyond high school.

As she had at Heaton, Principal Kempf found at East a cadre of educators eager to see her excel and achieve her dreams.

“Mrs. Sanchez was the best. Her ability to teach Math was incredible, especially for someone who struggled. But more impressive was her overall ability to teach. I remember clearly enjoying her structure and organization, probably more than the Math.

“Her expectations were high and she led by example, which is the mark of an exemplary teacher.”

As Principal Kempf neared the end of her journey at East, her mind turned to college. But in light of the family’s financial hardships, there was a lingering question as to whether she would be able to afford it.

“I truly began my educational career when Mrs. Lawson and Mrs. Laughlin brought me in and showed me what I needed to do to apply for college and grants,” Principal Kempf said. “And it was my sister Melanie, who is now a doctor of nursing, who showed me that it was possible to attend college, regardless of our family’s lack of finances.”

Upholding the tradition initiated by her mother, Principal Kempf enrolled at what is now Colorado State University Pueblo, working toward a Bachelor’s degree in Biology with a minor in Chemistry.

Her goal was to pursue a career in dentistry, until an Education class revealed her destiny.

“I think teaching is in my genes,” she said.

Eventually, Principal Kempf earned the undergraduate degree, a teaching certification, a Master’s in K-12 Education with an emphasis in Instructional Technology, and a Principal’s License: credentials that – just as her Mother said they would – opened the doors to previously unattainable opportunities.

Having distinguished herself in that position, Principal Kempf went on to be named a STEM Specialist, serving in that grant-funded administrative role for 6 years.

“I feel that position -- which allowed me insight into what was going on at all the buildings in the District and to work with veteran teachers -- was a very integral piece of my continuing onto the next level as a Principal,” she said.

“And we had a very strong STEM team, led by our ‘STEM Work Mom,’ Marcie Bartley.”

It was Mrs. Bartley who saw in her young protégé the makings of a strong and impactful leader.

“Marcie encouraged and motivated me to move forward, showing me what true impactful leadership was,” Principal Kempf explained. “She led by example, and taught me what meaningful learning in education looks and feels like.

“She was the queen of authentic learning and always stressed that the students we serve will always be Number One.”

It was an enriching experience that allowed Principal Kempf to see herself in the faces of the Bobcats. This “shared experience” served as empathetic inspiration to do all she could to improve their lives, just as others had done for her.

“It felt like home, because I attended Bessemer Academy,” Principal Kempf said.

When several Principalships throughout the District opened up, Principal Kempf – with a wealth of experience both in the educational field and life itself  – believed her time had come.

“When I was in the interview, it felt like South Park was a fit,” Principal Kempf said. “Fun and gregarious, Lynne left me with a great deal of knowledge and history, but most importantly, the quote ‘Peace out:’ which I am taking as her way of ‘peacing me in.’”

The staff at South Park has heartily welcomed Principal Kempf, who said one of her goals is to retain the school’s high academic standing.

“Having met my staff, I am now eager to meet the families in a planned meet and greet and throughout the school year,” she said. “I also am overjoyed with the prospect of meeting each Cougar and learning each one by name and interest.”

Together with current standing principals, Principal Kempf’s recent participation in a District-hosted “Administrator Bootcamp” allowed her the opportunity to reflect on the core values that drive her as an educator and leader.

“Participation in the ‘New Principal's Bootcamp’ solidified why I am destined to serve this community that invested so much in me, and that I am eager to give back to,” Principal Kempf said. “Along the way, Superintendent Macaluso, Assistant Superintendent Morey and all the executives and directors have been preparing us by providing life-long tools and continued support."

Principal Kempf also expressed appreciation to Principal Julie Griego, of Eva Baca Elementary, who served as a mentor during Principal Kempf's student teaching, "and my new mentor, Lisa Horton, principal of Fountain International Magnet School, as well as all the other principal mentors.

“We are a team at District 60, and we do what we do because of our passion and our love of kids.”