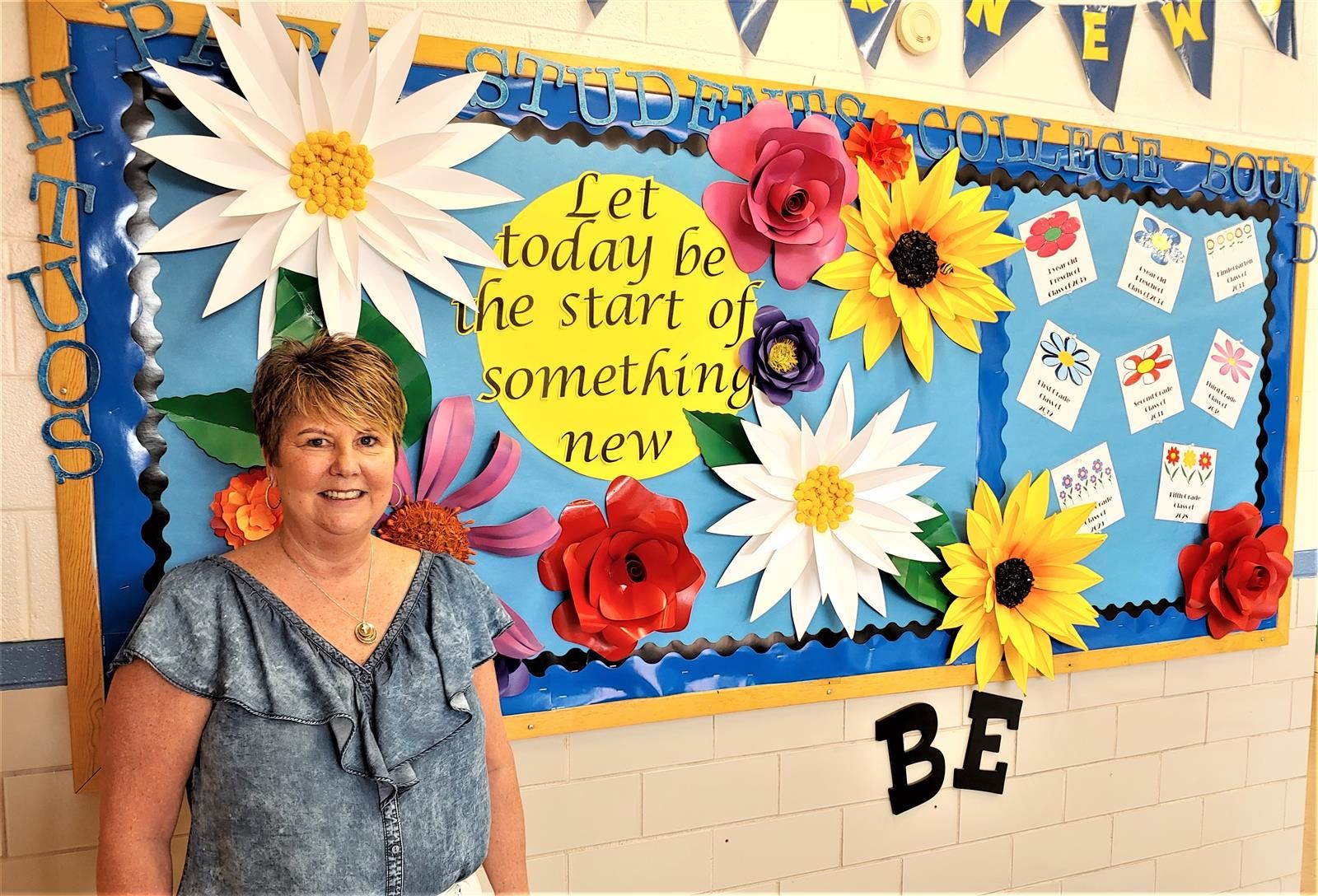 For a number of reasons, Lynne Brunjak won’t ever forget her first day as a classroom teacher.

“I was standing at the windows when a young girl walked by and called me a ‘perm head,’” recalled Mrs. Brunjak with a smile. “So I closed the blinds and thought, ‘Hmm. They didn’t teach us about that in college.’ So I didn’t quite know what to do with that.”

Fortunately, Mrs. Brunjak made it through that first hair-raising day, and thousands more filled with joyful and proud moments, en route to a storied 30-plus year career with District 60: most of it at South Park Elementary School, where she is in her final year as its principal.

For Principal Brunjak, a career in education was a natural progression for a life-long lover of little ones.

“I started babysitting when I was 8 years old. And when I was in high school, a friend and I ran a pre-school in the summer, for 3-, 4- and 5-year-old kids, every single day,” she explained.

Initially, however, Principal Brunjak questioned whether there would be enough work, with enough pay, in the education field. So she began to consider law as a career.

But a neighbor, who happened to teach at South High School where the New York native spent her senior year, convinced her otherwise.

“Lynne,” Gary Johnson told the young Colt, “if you want to be a teacher, be a teacher. Don’t worry about the job until you graduate from college.”

Following her heart, and Mr. Johnson’s advice, Principal Brunjak graduated from what was then the University of Southern Colorado with a degree in elementary education.

Principal Brunjak began her District 60 career at Hyde Park Elementary. It was, from the get-go, a learning experience.

“I had no idea where the school was,” she said. “After I was offered the job, I hung up the phone and then had to call back and ask, ‘Where is this school?’ I was so excited I got the job I just hung up the phone without asking.”

At Hyde Park, Principal Brunjak was entrusted with 35 third-graders. From her first introduction to the children, it was clear that education was to be her life’s work.

“I loved it,” she said of teaching. “It was absolutely the right choice for me.”

After a year at Hyde Park, Principal Brunjak moved over to Somerlid, where her resume was expanded.

“I taught 2nd grade, 3rd grade, Title 1 and ended with Kindergarten,” she explained. “It was a fabulous experience. In fact, I’m still friends with several ‘Kindergarten moms,’ and we go to lunch or dinner together every month.”

In 1999, Principal Brunjak landed at the school that would become her cherished home for the remainder of her career.

After two years as a South Park Special Education teacher, Principal Brunjak taught Kindergarten for 16 years. Having earned an advanced degree and a Principal’s license, she began to set her sights beyond the classroom.

“I thought that with my experience and knowledge, I would be good at administration,” she said. “Even while I was teaching, I was the Student Council rep and served on Social Committee. So I already was doing a lot of things outside of the classroom.

“And since I love the kids, I love the parents, I love the teachers and I always like learning, I felt being a Principal was something I would enjoy.”

The same year the Principalship at South Park became open, Mrs. Brunjak, seeking a change, was set to move over to Fountain to teach Special Education. But the allure of leading the building she had grown so fond of proved to be too strong to ignore.

“When I found out (Principal) Cary Palumbo was leaving, I thought, ‘Well, I love South Park, so maybe this is my time.’”

It in fact was her time, and in 2015, Mrs. Brunjak went from Kindergarten teacher to Principal in one step.

“The responsibility was a bit overwhelming, but I was in my own community,” she explained. “I had been here for 16 years already: I knew the families, I knew the kids, I knew the teachers. So I felt very comfortable moving into that.”

On her first day as Principal, Mrs. Brunjak met with the staff she had worked side-by-side with to introduce herself as the school’s new leader.

“It was a little frightening, because it was meeting with the faculty as the Principal, not as a Kindergarten teacher,” she said.  “We had a few bumps trying to move from teacher to Principal, and changing my role a little bit, but it turned out great.”

In her time as Principal, Mrs. Brunjak believes she has brought a sense of cohesiveness and a robust culture to the school, with the establishment of the college-readiness No Excuses University program a highlight.

“Here, we’re all about kids going to college and understanding the importance of that,” she explained.

Accountability, especially throughout the pandemic, is another point of pride for Mrs. Brunjak.

“Accountability for both kids and teachers, as well as parents,” she said. “I think we’ve done a phenomenal job of keeping the kids engaged through the pandemic. I’ve been very, very pleased with my teachers. I go online all the time, into their classrooms, to watch them, and they’re doing a phenomenal job.”

Come fall, South Park will, for the first time in two decades, be without Mrs. Brunjak’s presence. After a 34-year career, she is ready to step down.

Inside Mrs. Brunjak’s office are mementos of her three-plus decades in education, including hand-made drawings and gifts from children, and tokens of appreciation from parents. One of those gifts is from her husband, who has gifted his wife on the first day of school for all of her 34 years in education.

“Every year he buys me something and brings it in,” Mrs. Brunjak said of her husband. “This year, I got a little bronze figurine.”

“When they hired Morganlee, the fact that I’ll be leaving became a little more real,” Mrs. Brunjak said. “And that was a bit emotional for me.”

Mrs. Brunjak is confident that Ms. Kempf is inheriting a school that’s on a solid foundation, with a dedicated staff and a supportive school community.

“If I have any words of advice, it’s keep the open communication and kind of let it ride a little bit and see what changes need to take place,” Mrs. Brunjak added.

In her retirement, Mrs. Brunjak doesn’t expect her hands to become idle.

“I always wanted to be a CASA (Court Appointed Special Advocates) volunteer, so I’m going to do that,” she said. “I’ve thought about joining Rotary, because they do the dictionaries for kids in the 3rd grade, and I always thought that would be cool.

“And I’m planning to come back to mentor our two Kindergarten teachers, because I really didn’t get that opportunity this year with the pandemic.”

Second-grade teacher Cheryl Ford, who has worked alongside Mrs. Brunjak at South Park since her arrival in 1999, praised her as “loving, caring, dependable, reliable, and very organized.”

“She’s going to be dearly missed.”

“I know my last day will be bittersweet,” Mrs. Brunjak added. “It’s going to be difficult to leave the kids, the teachers and the parents. I’ll miss that communication with them and watching them grow. I mean, I’ve watched the parents grow: I had kids in Kindergarten who are now parents at my school. They’re still excited about the school and want their kids here.

“I’m most proud of the fact that our school is sought after and when people talk about South Park, they say wonderful things, because we have a great staff and culture, and they want to come here.”