Jaime Schwab has Fulfilled her Childhood Dream of Becoming a Principal

In childhood, there was little doubt as to what Jaime Schwab was destined to become. 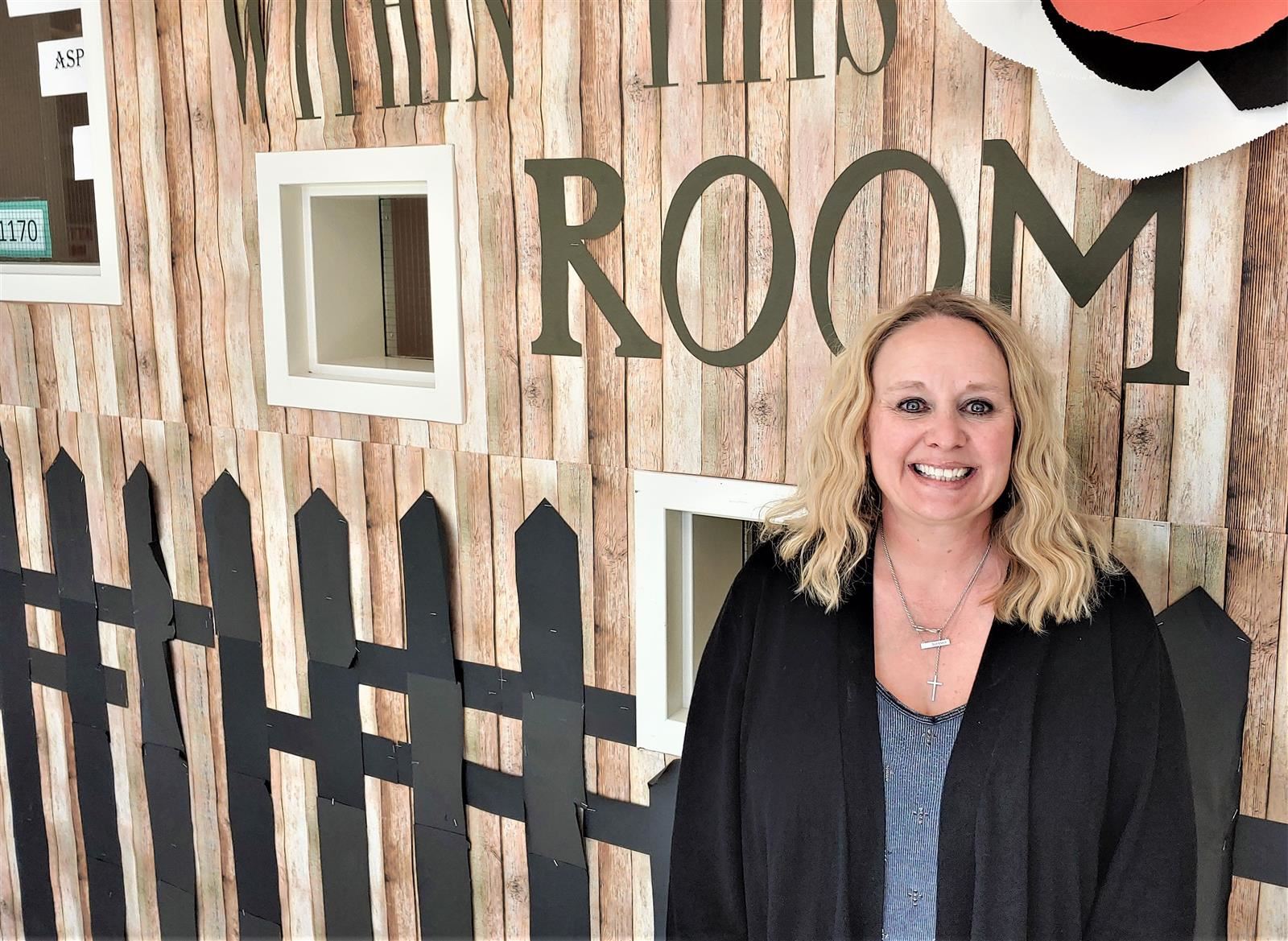 “My mom said I was ‘bossy’ when I was little,” said the La Junta-born Mrs. Schwab. “I like to be in charge, I guess, and I knew I had a passion and love for kids.

“I always knew going into education that I would be a Principal one day.”

After a teaching career in the district that began in 2000, Mrs. Schwab achieved that goal and is in her first year as Principal of Irving Elementary School, where she continues to build on the solid foundation set by past leaders like Valarie Davis and Ted Johnson.

At the University of Southern Colorado, Principal Schwab took the first step toward her future by majoring in Social Sciences, with a minor in Elementary Education and Reading.

Ironically, Reading was Principal Schwab’s most difficult subject during her own school days.

“I really had to work at it,” she said. “But as a result of that, it’s where all my background and experience is, because I became more invested in learning about how kids read.”

With a desire to work with younger students, Principal Schwab pursued the elementary level pathway.

“I knew my heart was in working with younger children,” she added. “I have a passion for early childhood education.”

Once a credentialed teacher, Principal Schwab joined the team at Hellbeck Elementary School as a 3rd grade teacher under Principal Jackie Henderson.

“Now, Jackie is here with me at Irving on a 110-day contract,” Principal Schwab said. “So it’s kind of funny, because we are back together again.”

Entering the classroom for the first time at Hellbeck brought Principal Schwab a sense of excitement mixed with nervousness.

“I wanted to make a change and a difference,” she said. “Immediately, I loved the amount of time you got to spend teaching, helping and supporting students, and the camaraderie you build with your team, school, and colleagues.”

In all, Principal Schwab spent 12 years at Hellbeck.

“We were a family there,” she said.

During that time, Principal Schwab earned the advanced credentials that would open the door to the role she fills now.

“I wanted to have a bigger impact on a larger scope, in a building, and working with the district,” she said. “It was about helping teachers, students and their families.”

When Hellbeck closed, Principal Schwab moved to Beulah Heights, where she taught Kindergarten and later became an instructional coach.

Principal Schwab continued to climb the ladder by taking an Assistant Principalship at Bessemer Academy.

“I spent three years there,” she said. “It was awesome; just great. I supported with student behavior and supported curriculum and instruction; provided teachers with observation feedback and did evaluations; built relationships with students, families and staff; and acted as a support system for the building administrator.”

The new responsibilities were welcomed by the driven and ambitious Principal-to-be.

“I loved the expanded duties and learning under the building Principal,” Principal Schwab said. “It was another learning experience so that I could get to the next place I wanted to be.”

After 3 years as an Assistant Principal at Bessemer Academy, Principal Schwab was eager to achieve the goal she set decades ago.

“I knew there was an opening at Irving, so I prepared myself, because I knew this would be a great fit for me,” she said. “Irving is a fellow Innovation Zone school and I had worked under the leadership of Ted Johnson at Bessemer Academy, and wanted to continue with that here.”

Principal Schwab’s first year as Irving’s leader has been filled with challenges posed by the global pandemic: most notably, getting to know whole of the Bullpup student body, and their families, in a virtual world.

“That’s been tough,” she said. “So you have to be creative in the ways you reach out to let parents know who I am, as well as the kids still in the building. And since there aren’t as many classroom visits as there would be in a normal year, it’s getting to know teachers through virtual meetings versus face-to-face.”

In this, a most unusual inaugural year, Principal Schwab said she has received vast support from Assistant Principal Chrissy Honeywell and other veteran staffers.

“It’s been challenging, but it’s rewarding and worth it,” she added.

“I want to come together as a collaborative group – with staff, parents, students – to work toward that goal,” she said. “I’m still a teacher, and will always be a teacher: you still get to support students, it’s just at a different level.”

The Irving community, Principal Schwab said, is “very tight knit, and rooted in some history and traditions. They saw a lot of success under Ted Johnson’s leadership and had a great leader in Val Davis. And there are staff that are rooted here and have continued to stay here and help kids and their families.

“We have teachers who have been here 20-plus years. They’re very close and care very deeply about the Bullpup community.”

Principal Schwab has two children in the district, and her husband is a paraprofessional.

“So we’re all rooted in the district,” she said.

Attesting to the ties that define the district, Principal Schwab said that one of the 3rd grade students she taught early in her career later became a teacher at Bessemer Academy during her tenure as an Assistant Principal.

“So I got to work with her as an adult, and it was a great experience to see how she developed,” Principal Schwab. “It was pretty unique and we had a great working relationship.

“She didn’t tell me I was her hero or anything like that, but she remembered me as her teacher,” she added with a laugh.

As the leader of Irving, Principal Schwab said she wants to be known as “a person of integrity who models and shows good examples, and is very driven, goal oriented and well organized. When it comes my time to leave here, I hope I was the change I wished others to be. I hope I helped inspire kids to continue to grow, and teachers to continue to teach.”