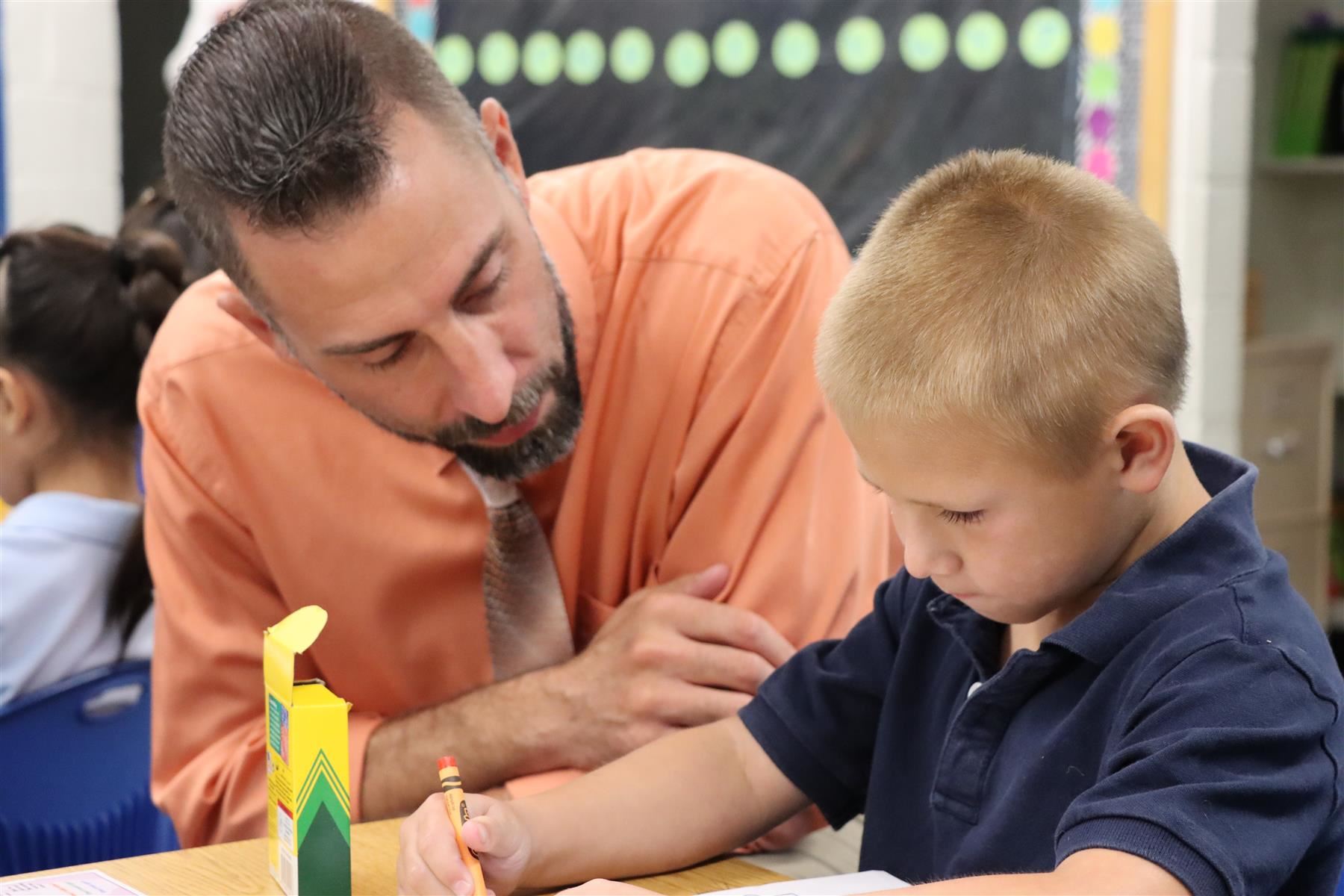 As the familiar yellow bus pulled up to Columbian Elementary School, it did so to the uplifting sounds of little ones enjoying themselves on the playground.

At the front entrance to the Bessemer school, Principal Jimmie Pool greeted children with his usual warm smile, beckoning them into the building and the official start of instruction for the 2021-22 school year.

It was an encouraging scene that promised -- after a year-and-a-half pandemic-related turmoil -- things are finally returning to the familiar routine.

Following an enjoyable and enriching day of reorientation Monday, students throughout the District returned to the classroom Tuesday as the fall semester got underway.

On hand to encourage the scholarly collective was Superintendent Charlotte Macaluso, Assistant Superintendent Suzanne Morey and members of the District’s Leadership Team, whose observation of classroom activity was complemented with heartfelt words of encouragement.

Although Jimmie Pool is no stranger to the role of Principal, he is starting a new chapter at Columbian.

After his former school, Carlile, was deemed unfit for occupancy, Principal Pool was assigned to Columbian, with many of his staff and students following him to join the ThunderBolt family.

“There are a lot of familiar faces from Carlile,” Principal Pool said as he welcomed scholars into the building.  “And there are those who have been online for a while. We’ve received emails from parents thanking us for their kid having a wonderful day Monday, and a lot of teachers have commented that in the cafeteria, they couldn’t tell the difference between the Columbian and Carlile kids.

Principal Pool then accompanied Superintendent Macaluso and Kim Cura, Executive Director of Elementary Education, on a tour of the industrious Columbian classrooms.

“I told everybody that you are the best at working hard and being kind, and they wanted to come in and check it out,” Principal Pool announced to a group of first-grade scholars.

At each stop, Superintendent Macaluso offered well wishes for a fruitful school year and thanked the scholars for remaining committed to their educational pursuits. 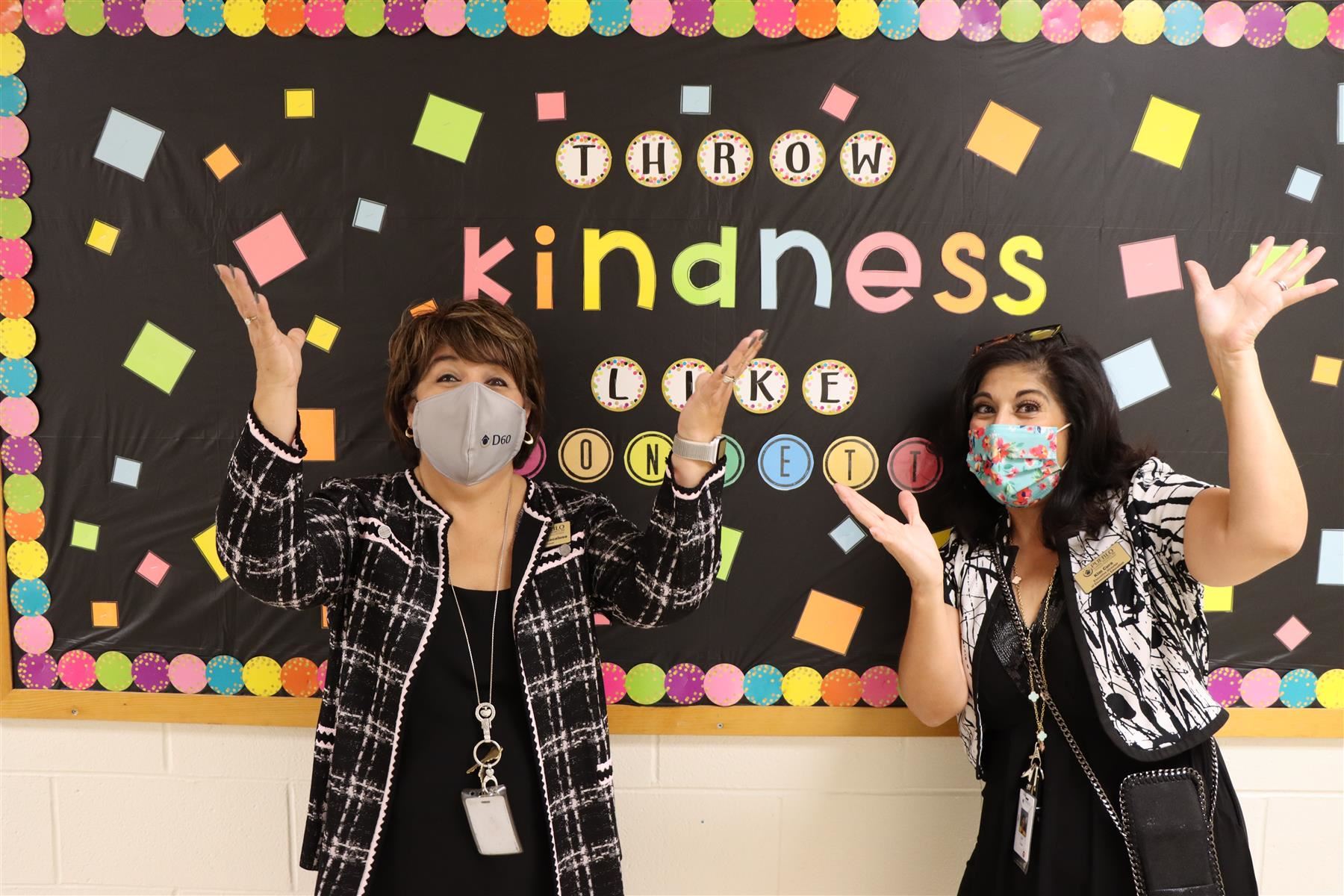 “It’s wonderful to see the students working so hard,” Superintendent Macaluso said. “I think the theme for this year is ‘care and connection,’ and making sure we create a sense of belonging for each and every scholar.”

“The smiles say it all,” Executive Director Cura added. “They are excited to be back and I know our teachers are excited to be here. We don’t know what tomorrow brings, so we need to make the best of our time together, because every moment counts.”

Executive Director Cura then visited South Park Elementary School, where Morganlee Kempf is beginning her tenure as the school’s Principal.

Throughout the halls, a succession of vibrant and well-decorated bulletin boards proclaimed an optimistic outlook for the post-pandemic school year.

“Be a Rainbow in Someone Else’s Cloud.”

“Be Proud. Be Amazing. Be Yourself.”

“That theme is ‘We Believe,’ because here, we feel the sky is the limit,” Principal Kempf explained. “We believe in endless possibilities for our Cougars, and really, anyone can insert anything after ‘We Believe.’”

As a longtime principal, Executive Director Cura offered a bit of sage advice to Principal Kempf.

“Enjoy this moment and know your influence goes beyond the students. And show your passion and love to your teachers.”

Also on the South Side, Marci Imes, Executive Director of Secondary Education and CTE, visited Roncalli STEM Academy, where she served as Principal for years.

Principal Michael Cservenak, who worked in concert with Executive Director Imes in implementing a robust STEM curriculum, was on hand to greet her.

“As a Principal, Marci was my mentor,” Principal Cservenak said.

As the tour progressed, Executive Director Imes observed the impressive fruits of the seeds she and Principal Csevernak planted years ago: robust graphic arts, urban farming, drone and other STEM-centered offerings.

“I think it’s amazing to see where he has taken the work we’ve done together: it’s on steroids now,” Executive Director Imes said. “He’s actually improved the systems we put in place and made it better. Every time I come in here, Principal Cservenak is taking it to the next level.

“And that makes me feel really good.”

Another longtime principal, Ted Johnson, stopped in at Heritage Elementary School to take in the hard work being put in by the Eagles, under the direction of first-year Principal Richelle Paradiso.

“It’s fun to see all the kids back and learning, and being able to be in person with all their classmates,” said Mr. Johnson, now Executive Director of Continuous Improvement and Innovation. “It’s all about routines and procedures the first few days, so they are off to a good start.”

“It’s been a great start to the year,” added Principal Paradiso. “My secretary has the office running really well and everybody is excited. We had a few kids that were anxious, but we worked that out and it’s a great day.”

“Were you as excited to see your teachers as they were to see you?,” Assistant Superintendent Morey asked a group of 5th graders. Following the affirmative response, the queries continued.

“Do you know what your important role in the District is?”

“Being in school,” came a reply.

“That’s correct. And being a learner. That way, you can plan the rest of your life so that you have awesome choices,” Assistant Superintendent Morey added before posing a final question.

“What’s the best thing about being in middle school this year?”

“The fact that I have a friend,” came the endearing response from a young girl.

Across town at Park View Elementary, Superintendent Macaluso, accompanied by Michelle Alcon Montoya, Director of Student Success and Equality, was introduced to the Cubs by Principal Floyd Gallegos.

The fact that Park View is a part of the college-ready No Excuses University network figured into the comments offered by Director Alcon Montoya.

“Mr. Gallegos expects you to work hard so you can start your path to college,” she said. “This is a No Excuses School, which means there can be no excuses for you not getting to college.” 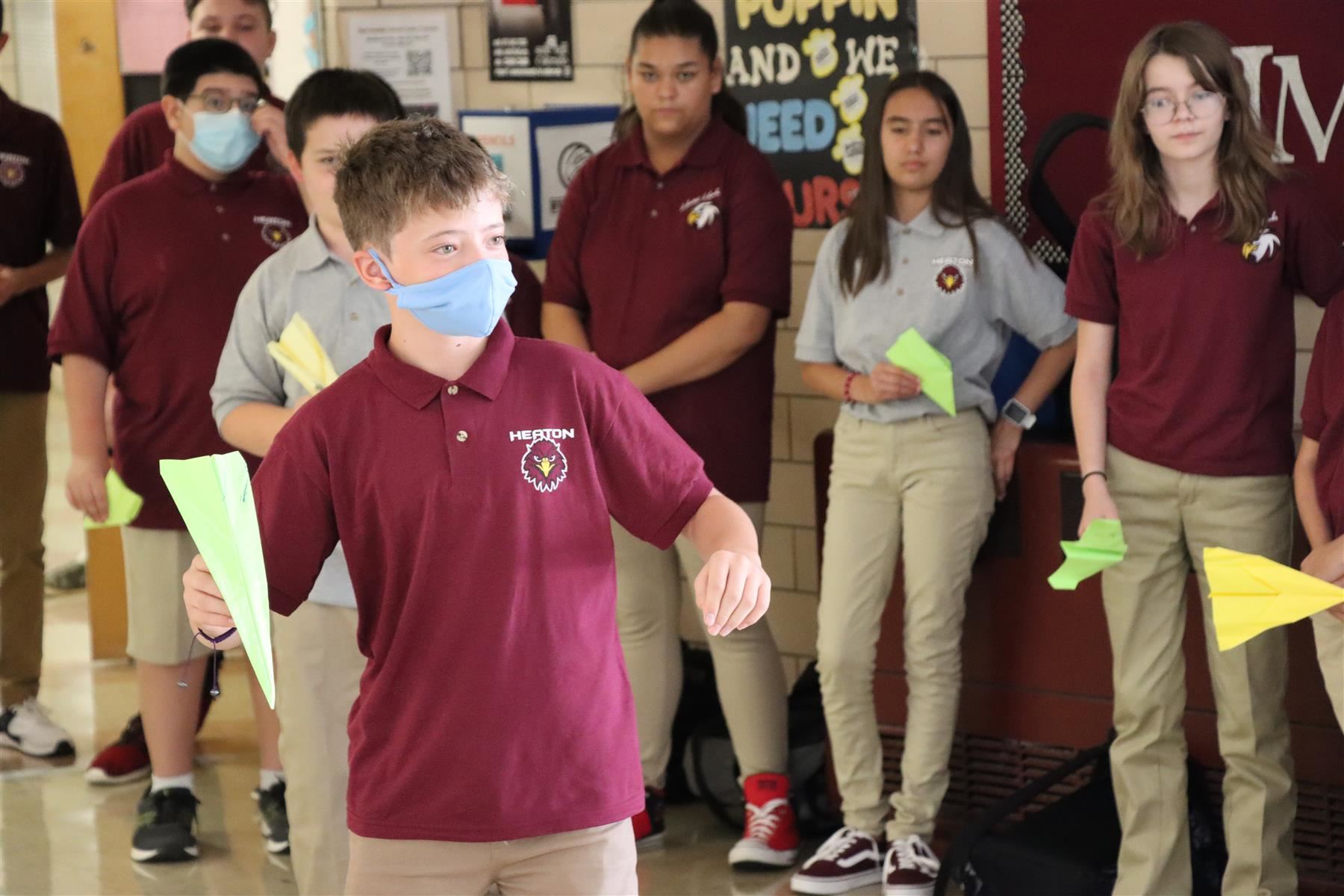 Superintendent Macaluso also expressed a desire to see the Cubs flourish and excel.

“I just came to wish you a great school year,” she said. “We are so thankful that you are here today. I hope you are having lots of fun.”

The final visit of the day came at Heaton Middle School, where Principal Jayme Cardinal was assisted by Andy Burns, Executive Director of Intervention and Student Support, in judging a spirited paper airplane contest in the school’s foyer.

“I think we saw some budding engineers and future aerospace professionals,” Executive Director Burns said once the flying was complete. “It was really impressive to see the ingenuity and hard work the students put into it. And not only that, some really put their bodies into their throws.”

“I admire your hard work and ability to stick with it, even through challenging times,” he said. “Remember that you have teachers here who are willing to support you and make sure you are successful here, in high school and in life.”