From his home in the San Francisco Bay Area, Christian Michael posed the first question of the day to the Pueblo Academy of Arts Phoenix in Mr. Russ Avina’s Digital Production class. 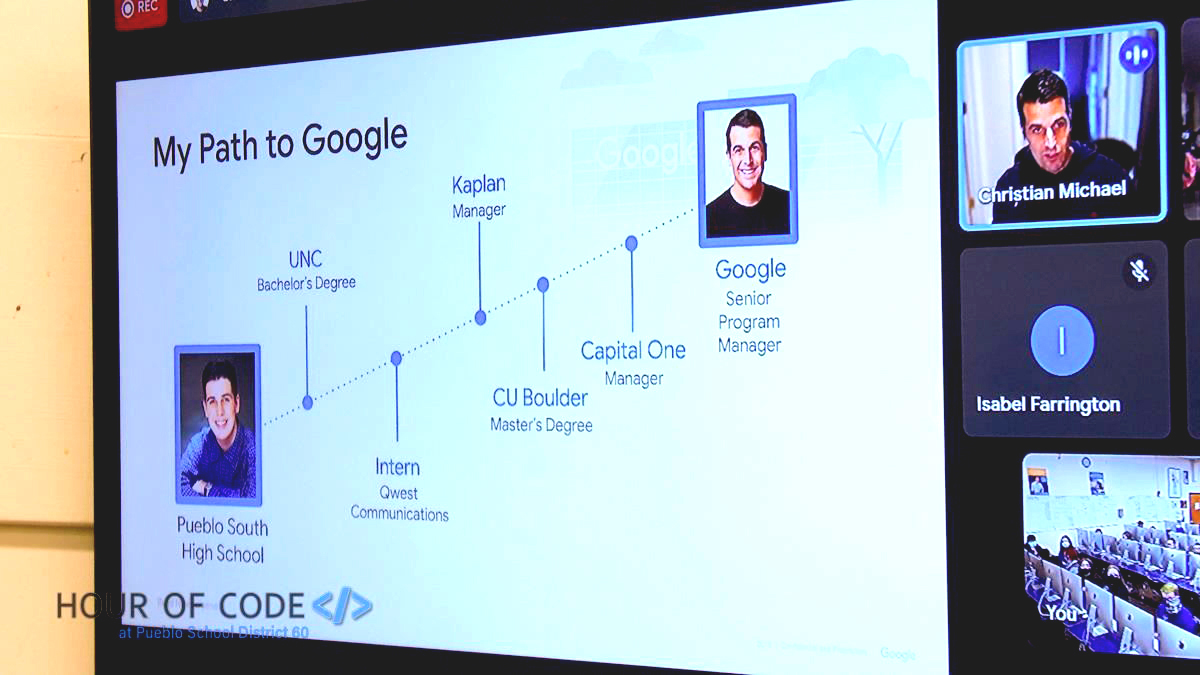 “Are the lockers there still painted purple?”

The affirmative answer brought a smile to the face of Mr. Michael, a proud graduate of both PAA and South High School.

Today, Mr. Michael is a “Googler,” serving as North American Training Lead for Google Cloud. In that role, and with an enduring love of his hometown of Pueblo, Mr. Michael returned to the District, in a virtual fashion, to inspire the next generation of computer scientists, engineers and programmers.

Although the District has long championed an Hour of Code – a hands-on introduction to computer science designed to demystify code (programming) – this year, the event was promoted District-wide, with elementary, middle and high schoolers taking part.

When Mr. Michael learned of the District’s wide-reaching commitment to the Hour of Code, he eagerly offered not only his services but those of hundreds of his fellow Googlers in the form of Ignite Talks: motivational and informative presentations that offer a fascinating insight into the world of Google and its many offerings, from the Cloud to YouTube to a driver-less car designed to increase accessibility for the visually impaired.

At PAA, the Phoenix were presented with a fascinating overview of the Google operation. From its humble start in the garage of a Menlo Park, California home to its ascent as one of the most well-known and valuable tech companies of all time, Google today employs 140,000 professionals across the globe. 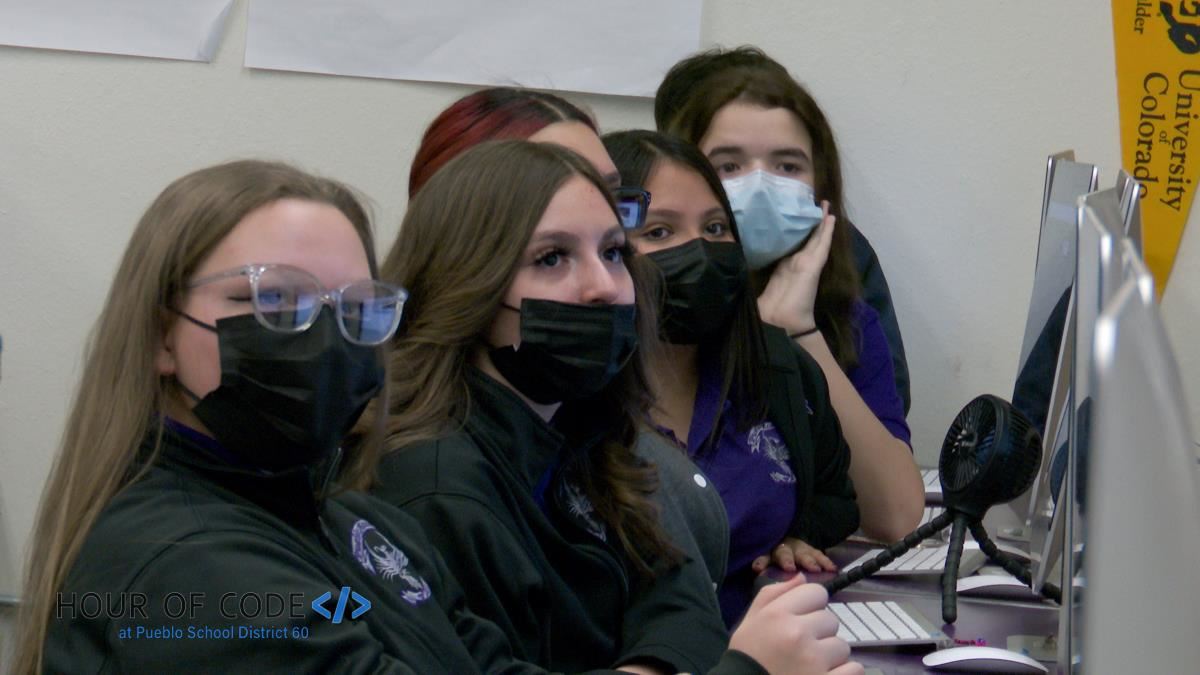 As the title implies, Ignite Talks are designed to inspire and motivate young scholars to consider a career in the expansive field of computer science.

Although music was Mr. Michael’s first passion, he discovered that the mathematical principles inherent in music translated ideally to the computer science pathway he now finds himself on.

As the Phoenix learned from Mr. Michael, a career in computer science can be “important and interesting,” providing for a great quality of life from a financial standpoint. As the billions who make use of Google and its many services can attest, computer science continues to make a positive and life-enhancing difference in the world.

“The things in computer science and Google connect with real life,” Mr. Michael informed the Phoenix.

From improving the performance of athletes to the creation of video games to robot-driven surgery, the science behind computers – and the programming that powers the machines – is the very lifeblood of modern-day life.

These Ignite Talks presented by Googlers throughout the District afforded the unprecedented opportunity to learn, from the source, what it takes to ascend to that top tier of the tech profession.

For those aspiring to follow in his footsteps, Mr. Michael strongly encouraged a full load of math classes, especially advanced math, as well as those subjects students may be passionate about. In his case, it was an Advanced Music Theory class at South that served as the key to unlocking his future. 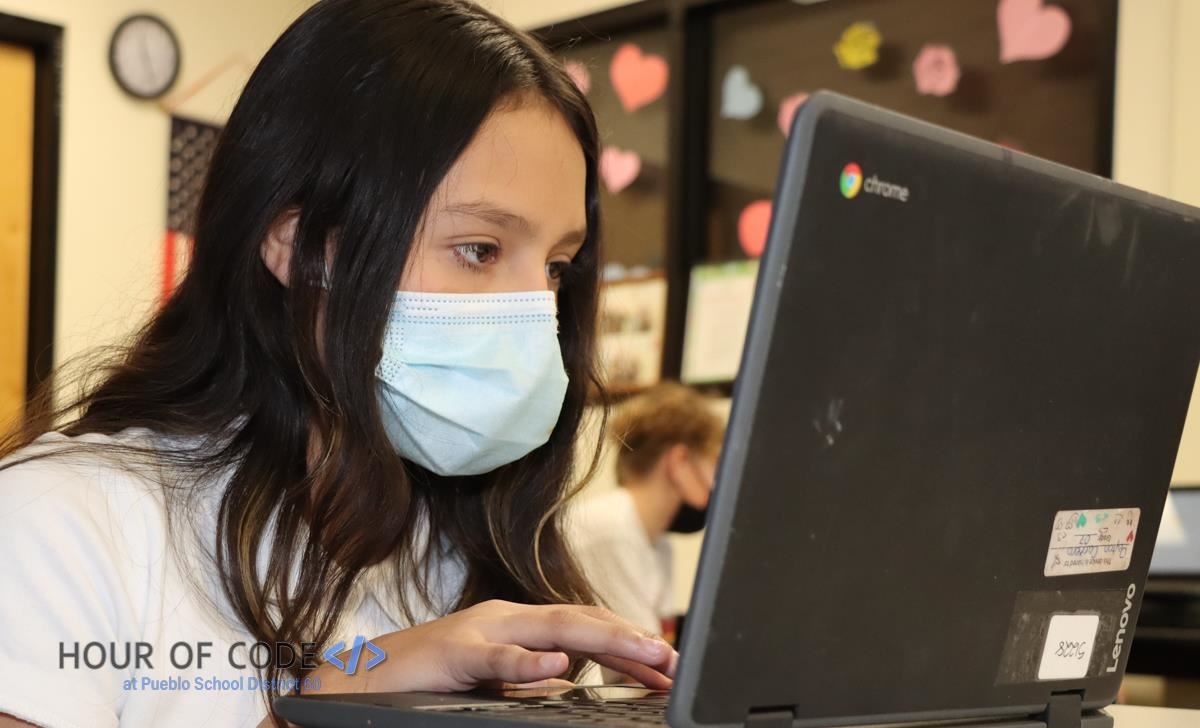 At Corwin International Magnet School, Amelia Paz, a Peruvian who earned her Computer Science degree at the University of Kansas before joining Google as a Software Engineer, led the Cyclone seventh-graders in a virtual code-driven exercise in Scratch.

Fittingly, the Corwin scholars were encouraged to employ programming directives to morph the iconic Google logo into a host of visually stimulating designs.

As the Cyclones already possess a strong working knowledge of computers and code, the endeavor was a creative and mind-expanding success, with Ms. Paz’s instructions and encouragement adding to the inventive fun.

“I think it’s super special that Google volunteers took the time out of their busy day to talk to the kids about how important coding is,” said Jerri Garcia, a Design teacher at Corwin. “If there is a device that kids are using today, then it’s probably been coded.”

“It was a lot of fun messing with things,” Isaiah said. “I like using electronics and moving things around: especially when I can use it toward infinite numbers.”

“I liked the fact that we could change the colors of the logo,” added classmate Peyton Corral. “I didn’t know we could do all that.” 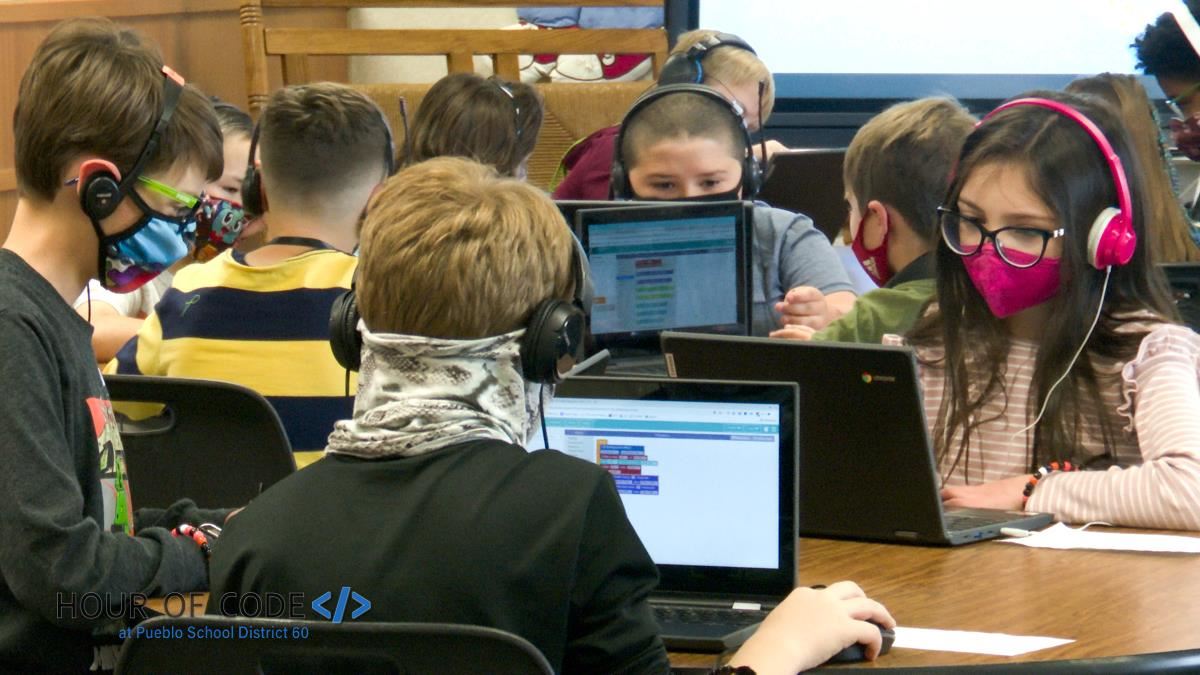 Across the District, the Ignite Talks were complemented by hands-on activities centered around the use of code to achieve a desired result, whether that be to direct a robotic caterpillar to a piece of “food” or design a virtual dance routine worthy of a rating of “10.”

At Haaff Elementary School, Tigers had the opportunity to both virtually engage with a Googler as well as implement their already impressive coding knowledge through a host of virtual and in-person activities.

“The kids had plenty of great questions for our Googler,” said Haaff educator Kyle Bernstein. “They were really intrigued about the gaming part of it because we have a lot of students in our group that want to be video game designers. So it was really cool for them to be able to see the process.

“Although our Google is more involved with the search engine part of it, he did design his own game. So it was interesting for the kids to see how code is involved in that process. It definitely piqued their interest.”

Kathy Lewis, Haaff’s Gifted and Talented Coordinator, said Tigers were very curious about other aspects of the Googler’s life.

“They wanted to know what kind of education he had before joining Google,” Mrs. Lewis explained. “He is from Germany but earned his Master’s degree at the University of Colorado, which the kids found kind of neat. They asked him what he did at Google and whether he liked it.

“I know for sure, his talk inspired some of the kids. You could see the light come on, and they talked about it long after the presentation was done.”

Inside the Media Room at Bradford Elementary School, two Eaglets were busily engaged with a couple of Dashbots named “Stuart” and “Tom.” 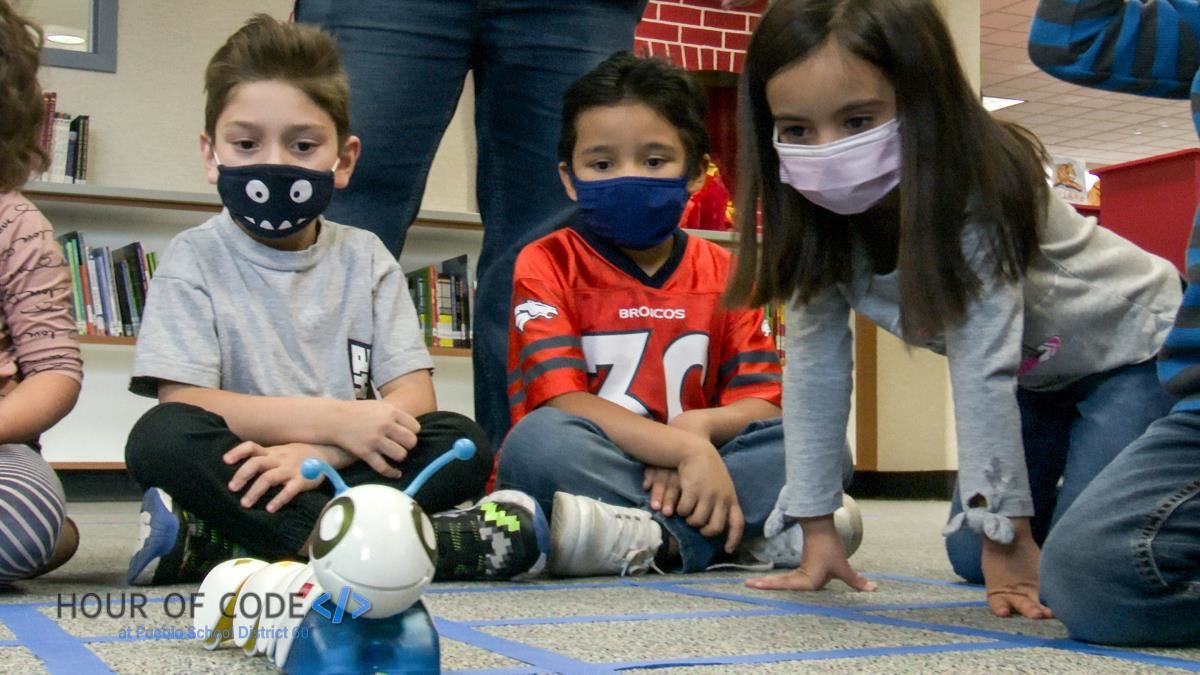 Employing Bluetooth-powered computer devices, the girls typed in code in order to direct the responsive Dashbots to “visit” the Eiffel Tower.

As Bradford is part of the District’s pilot Computer Science Program, the savvy Eaglets are already aware of the power of code.

“‘Tom’ knows where to go because he’s connected to our computer,” one of the girls explained. “Then I type something in and it moves ‘Tom.’”

The display of computer science acumen was pleasing to Pamela Masciotra, Dean of Students.

“And we have been very purposeful about the technology we brought to Bradford. We’ve always tried to bring cutting-edge technology here. So to have that technology be a part of their studies has been an amazing opportunity.”

At East High School, a week of Hour of Code activities culminated with an in-person presentation from retired Air Force Colonel and aerospace engineer Michael Sumida, who spoke to the Eagles about the ample and lucrative opportunities in the cybersecurity field.

“Why would you want to get into a profession where they have more people than they can shake a stick at, and where people stay forever?,” offered Colonel Sumida, whose impressive resume includes service as a Flight, Squadron and Wing Commander, 22 ribbons and medals, and Top Secret Clearance. “Wouldn’t you rather get into a profession where there is a shortage of personnel?” 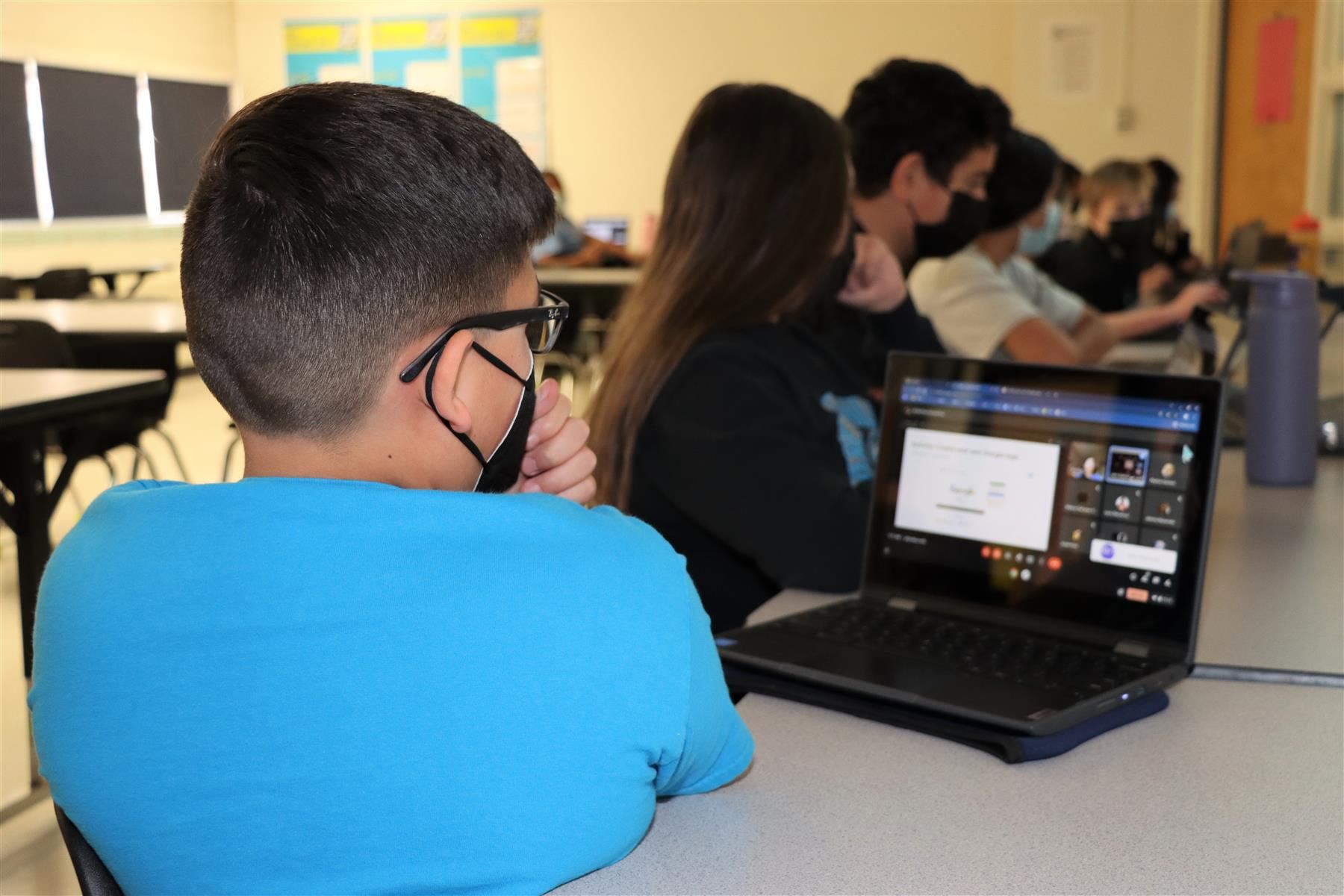 That cybersecurity shortage is expected to reach 200,000 within the next few years, which translates to fantastic opportunities for promotion and limitless career potential.

And unlike other engineering or computer science fields, little to no math or expertise in equations is needed.

“It’s none of that ‘math stuff,’” Colonel Sumida said. “You don’t have to memorize Calculus or equations. It’s mostly understanding how computers work, how people get into them, and then learning how to protect them.”

The path that leads to a career in cybersecurity is, Colonel Sumida added, without significant financial challenge. An Associate degree in the field can be earned through Pueblo Community College at reasonable cost.

“It’s not hard to do. I’m telling you,” Colonel Sumida said. “And another neat thing about cybersecurity is that you can get a job right here in Pueblo. Who uses cybersecurity? Every town, every city on the planet that has a computer that hooks up to the internet, needs to be smart about cybersecurity.

“There are cybersecurity jobs everywhere.”

Superintendent Charlotte Macaluso was pleased with the widespread participation in Hour of Code activities and expressed her gratitude for the unprecedented opportunity to partner with Google in this year’s endeavor.

“We are very grateful and thankful for Mr. Christian Michael’s role in establishing this partnership with Google, and are hopeful that it will continue in the coming years,” Superintendent Macaluso said. “It says a lot about our District and our scholars that Google, a household name throughout the globe, took the time and effort to virtually engage with us in hopes of inspiring the next generation of computer scientists, engineers and programmers.”

The District-wide Hour of Code was coordinated by Paula Herraez, Teacher on Special Assignment in Instructional Technology and Computer Science, with support from building Principals and support staff.