"Be the First:" Michelle Alcon Montoya Remains the Vibrant Inspirer 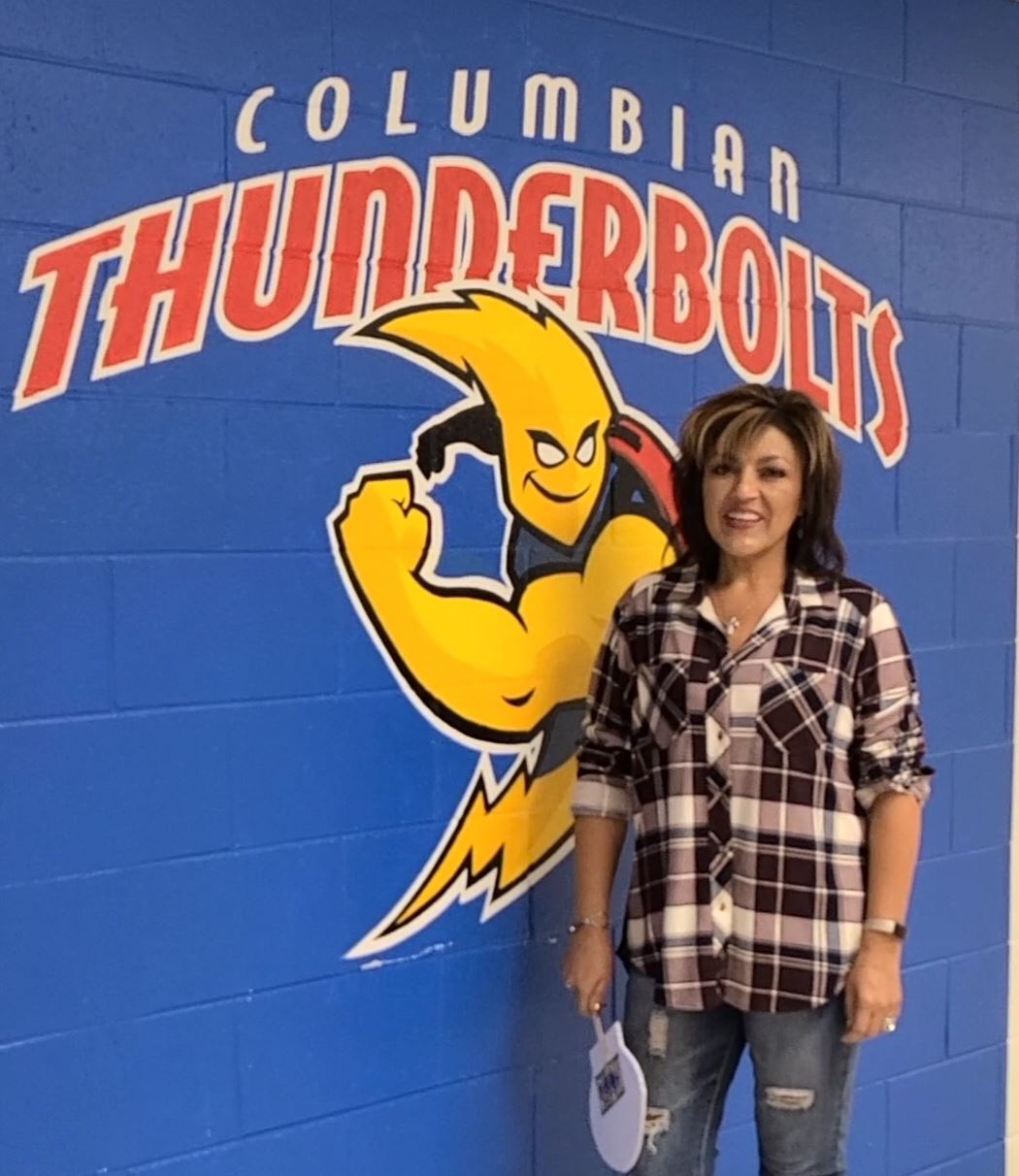 Married at the age of 18 and divorced two years later, Michelle Alcon Montoya found herself a single mother with an uncertain future.

What was certain, however, was an unbreakable spirit and defiant determination that, together with the unwavering support of parents and family, enabled her to face that future with confidence and an achievement mindset.

Today, Michelle Alcon Montoya is the celebrated Principal of Columbian Elementary School. Through an unparalleled work ethic, strong faith and unwillingness to accept defeat, she became the first member of a very sizeable family to attend and graduate from college, eventually going on to earn two Master’s degrees and a Principal’s licensure.

While forging a successful educational career, Principal Alcon Montoya has touched, and continues to impact, the lives of thousands of young men and women, many entangled in their own challenging and difficult circumstances.

“But to do that, you first have to be successful. And they can do it: they just need someone to say, ‘You can!’”

Although born in Los Angeles, Principal Alcon Montoya was educated in Pueblo and graduated from Central High School. Following a tradition of her extended family, she married right out of high school.

“And when I was 20, I found myself going through a divorce, with a child,” she explained. “That’s when I thought, ‘I need to start looking for my future so that I can take care of my child.’”

It was during that tumultuous period of her young life that Principal Alcon Montoya started what turned out to be a new family tradition: attending college.

“My Mom’s family is huge: there’s 12 siblings,” she explained. “I have one aunt and one uncle who have 8 children each. In all, it comes out to nearly 300 people in my Mom’s immediate family. In my Dad’s family there are two brothers and a sister.

“And out of all those family members, I was the first one to attend college and the first to graduate college. It was like the 4-minute mile: everyone just started attending college. Now, it’s almost an expectation within my family.”

But there were pockets of resistance. Upon hearing the news that his young niece would be attending college at what is now Colorado State University Pueblo, an uncle offered his advice.

“Mija. Why are you going to college? You are still young and pretty. Why not just get married again?,” the uncle asked.

“Because I want to be able to do it by myself,” Principal Alcon Montoya replied.

With a love of children, coupled with enjoyable memories of her own days as a schoolgirl, Principal Alcon Montoya set her sights on a career as an educator.

“I had some awesome teachers in elementary and high school that were life-changing for me,” she said. “Those were my role models and I decided to follow their footsteps.”

Those footsteps, however, were not exactly effortless to follow.

“My son was 1 when I started college,” Principal Alcon Montoya said. “Although I received scholarships and financial aid, I did work part-time jobs and work-study all the way through college. And there were a lot of times my son was going to bed at 10 p.m., and that’s what time I would start studying, until 2 in the morning.

“And that was the routine.”

Fortunately, Principal Alcon Montoya’s parents and extended family willingly lent a few hands to assist her on the journey, which in turn inspired many within that tight collective.

“I loved teaching, but I worked endless hours,” she said. “I started my son in school earlier than I wanted because it was more affordable to put him in Kindergarten and then after-school daycare. And even after the daycare closed, I was picking him up and heading back to the school to finish lesson plans.

“Most nights, I was there till 9 or 10 o’clock. For first-year teachers, it’s like that, and it was a rude awakening for me.”

After one year in the Metro area, Principal Alcon Montoya returned to Pueblo for the opportunity to teach at an alternative high school for adjudicated students and teen mothers that opened in the former Keating Middle School building.

There, her colleagues included many educators who went on to become Principals and administrators, including Aaron Bravo and Tharyn Mulberry.

For the five years she spent at the school, Principal Alcon Montoya saw in the student body a reflection of herself and her own challenges.

“I loved it there, because I knew that even though the students had unsuccessful experiences in high school, they had potential,” she said. “I did the Single Mom program, which I could easily relate to because I was only a few years older than them and also a single parent.”

In only her second year of teaching, Principal Alcon Montoya discovered what she considered to be her destiny: that of exposing youngsters to “something better: a life they aren’t familiar with.”

Championing the underdog, and tirelessly striving to inspire and instill a sense of hope, in turn became her life’s work.

“That’s why I have such a passion for Title 1 Schools and students who are less fortunate or under-resourced: because I came from that,” Principal Alcon Montoya said.

While teaching at the alternative high school, Principal Alcon Montoya earned a Master’s in School Counseling, which proved to be a great benefit in her work with the students there. And after 5 years and many impacted lives, Principal Alcon Montoya became a Counselor at Risley, where she spent the next 16 years – half of her entire educational career.

“I loved working at Risley, because my Dad went to middle school there and I still consider myself an East Sider,” she explained. “I wanted to give the kids new experiences, so we brought in different athletic events, guest speakers, and formed partnerships within the community.”

Many of the students who passed through Risley during Principal Alcon Montoya’s time there were the offspring of the young girls she taught and mentored in the Single Mom program at the alternative high school.

“That is my demographic, because I have the Title 1 heart,” she said. “It’s compassion, empathy and a passion to serve the underprivileged. And that job isn’t always easy.”

Many times, Principal Alcon Montoya relied on her own life experiences – which included the loss of her second husband when their daughter was but 7 weeks old – as she counseled youngsters dealing with serious life issues.

While counseling at Risley, Principal Alcon Montoya became a Teacher in Charge and was handed many leadership responsibilities. She also earned a second Master’s degree, this one in Educational Leadership, and a Principal’s License.

Under the wing of the school’s Principal and future superintendent of the district Charlotte Macaluso, Principal Alcon Montoya found a supportive mentor who began grooming her for building leadership.

“She really supported my transition into a stronger leader,” Principal Alcon Montoya said of Superintendent Macaluso. “I always had the heart and work ethic but she really groomed me for the next step.”

After 16 years at Risley, Principal Alcon Montoya took that step out of her “comfort zone” and began exploring options at the building leadership level.

“I saw it as practicing, and getting prepared,” she said of the application process for Assistant Principalships and Principalships. “I wanted to see what the interview process was like.”

Although her first attempt at securing an Assistant Principalship was not successful, that did little to deter her spirit and drive. While vacationing in Texas, Principal Alcon Montoya received a call from the District 60 Administration Office that would serve as an initial interview for Principalship positions at Morton and Columbian Elementary Schools.

“I was in the parking lot of a What-a-Burger at the time,” she said with a laugh.

And despite an unconventional second interview – it took place in a Texas business office via video conference – Principal Alcon Montoya made a notable enough impression to be named Columbian’s new Principal.

“I was a little overwhelmed, because I had never been in the elementary setting,” she said. “I jokingly told the HR department, ‘Didn’t they know I was kidding? I was just using the interview for practice!’”

Describing herself as “humbled and honored” to be named Columbian’s leader, Principal Alcon Montoya found in her own journey and life experiences the strength she needed to begin the next chapter of her career.

“I think God has given me experiences in my life that really prepared me for what I was called to do,” she said.

In her first year at Columbian, Principal Alcon Montoya listened and learned.

“A smart person once said, ‘Don’t go in with a whole bunch of changes,” she said. “So for my first year, I leaned on a lot of awesome people who were wonderful to work with, and I learned to understand the culture of the school and the pride in it: what’s important to the staff, the kids and the families.”

From the beginning, Principal Alcon Montoya set out to forge strong and healthy relationships with her Thunderbolts. Like the students at the alternative high school and Risley, she saw in them a world of promise and potential simply waiting to be revealed.

“Our core values start with having a strong relationship with kids in a nurturing and trusting environment,” she explained. “We don’t humiliate kids. We don’t yell at kids. We don’t discipline kids in front of other kids. And it’s that heart that moves this school: it’s a very positive and welcoming culture.”

Shortly after she became Principal, Columbian, for the first time in 20 years, earned a Performance rating from the Colorado Department of Education. That achievement, Principal Alcon Montoya said, is a tribute to the dedication of the staff.

“Our team has a really positive growth mindset,” she said. “Everyone has a passion and a burning desire to make a difference. It all starts with that commitment: our teachers have heart and because of that, our kids know we care about them.

”It’s that belief system that all students have potential. And as I like to say, ‘Believe or be leaving’ and ‘Kids First.’ And I think my staff agrees with that.”

“It was with Ms. Montoya's influence and encouragement that I am in the position I am today, and I will be forever grateful to her for all of that,” said Michelle Atencio, Columbian’s counselor. “I had started a Master's program for counseling years ago, but didn't finish.  When she heard that I had started it and just needed a few more classes to finish, she told me that I better finish and gave me the support and encouragement to do so.

“The love she has for our kids is evident she not only inspires our students, but our staff as well.  She encourages us all to achieve personal and professional goals and endeavors.  Ms. Montoya is our biggest supporter and always manages to foster positive discussions and brings the best out of our students and staff.”