For a rugged outdoorsman and cattle runner who has braved the wilds of Alaska to lay down Salmon nets and the high country of Colorado searching out big game, Jimmie Pool is the epitome of the “gentle giant.” 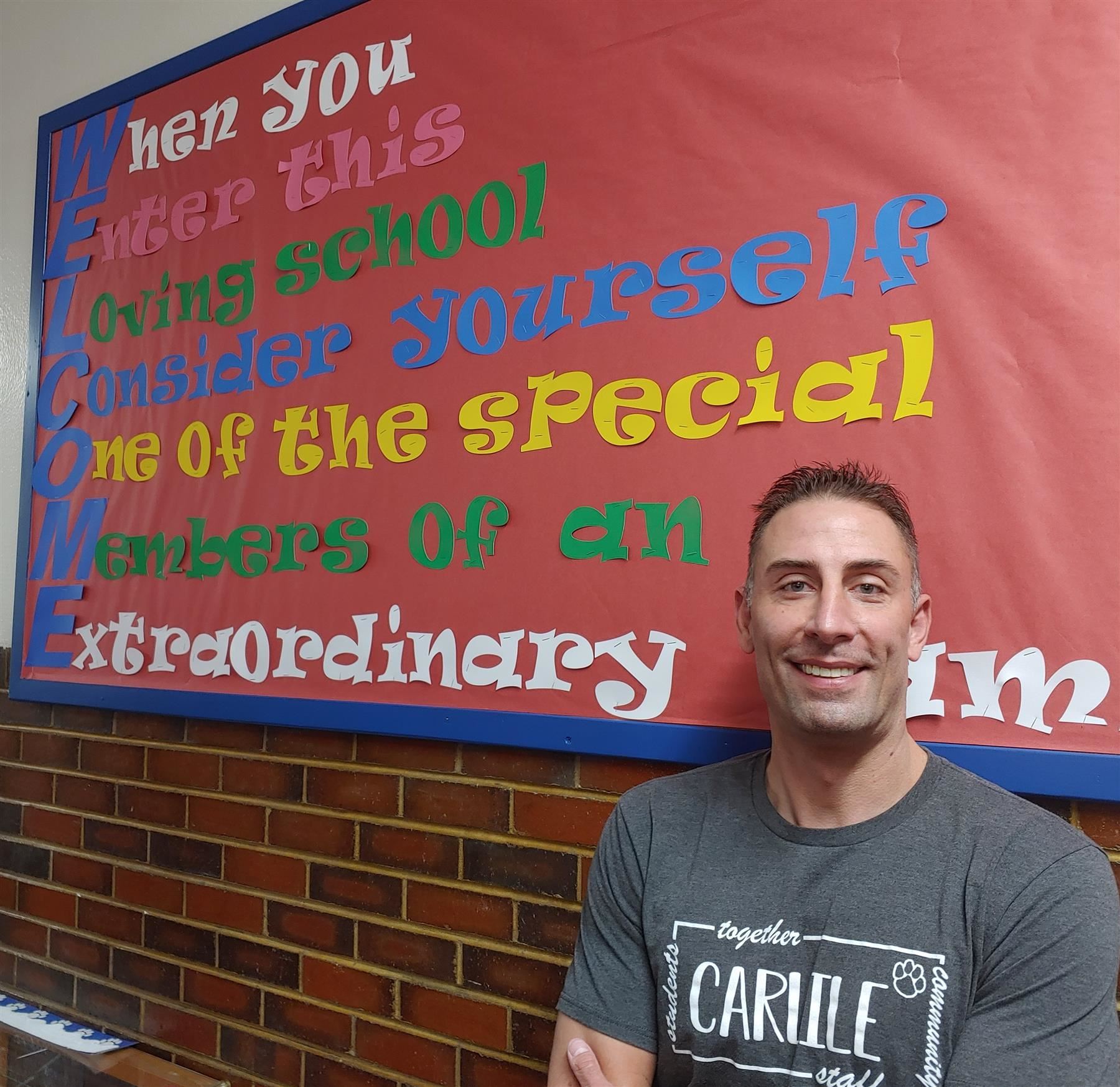 Never without a smile, Mr. Pool radiates warmth, calmness and compassion: qualities that have endeared him to the Wildcats of Carlile Elementary School, where he has served as Principal for the past three years.

Although the field of education is where Principal Pool found his calling, he pursued a degree in Psychology from Colorado State University Pueblo, “not knowing exactly what I wanted to be,” he said. “But while I was there, I got a work-study job at the campus Child Care Center and did that for three or four years. And that’s when I fell in love with working with kids.”

After earning the Psychology degree – “I didn’t pursue that field but I do believe there are some skills I gained from the degree that have helped me work with kids,” he said -- Principal Pool returned to college to pursue an Elementary Education credential.

“I wanted to focus on the younger kids,” he said.

In 2004, Principal Pool began his career with the district at Minnequa Elementary School, where he served as a Media Specialist, a Lindamood-Bell  leader, Response to Intervention Coordinator, Dean of Students and finally, Assistant Principal.

The variety of experience was embraced by Principal Pool, who from the first days at the school fostered strong relationships with the Lil Cats.

“As I built that rapport and connections, I found that the kids I had some of the best rapports with were the most challenging students, who needed that love and care,” he explained. “And it just kept me going.”

Sensing his inherent leadership skills, the Minnequa administration began placing more responsibilities and duties on Principal Pool’s plate. With his focus solely on the children and not his career, he was gently being groomed to become a building leader.

“Things just sort of came to me,” he said. “It was nothing I had planned for or thought out. People said I was able to hold myself together pretty well, and these opportunities just started to fall in my lap.”

Along with Minnequa colleague Jonathan Dehn, now Principal of Beulah Heights, Principal Pool successfully obtained a Principal’s License, after which he was named Dean of Students at Minnequa.

“There were challenges and opportunities at the same time,” he said of that position. “Just being able to see the whole picture, and the importance of driving instruction and culture in a building, always brought me back to, ‘We do what’s best for kids.’

It was while serving as Assistant Principal at Minnequa that the Principalship at Carlile opened up.

“I was at Minnequa for 13, 14 years, but I knew I needed to spread my wings and move up,” Principal Pool said. “I felt like I was ready: nervous to move on to something new, but ready.”

Principal Pool said he had heard “wonderful things” about Carlile from colleagues as well as his wife: a D60 educator who attended the school.

“Her name is still up on a plaque here,” he said, adding, “Everyone told me that Carlile was a hidden gem of a school.”

Principal Pool said he greeted the news that he had been selected as Carlile’s new leader with “excitement, but a little nervous at the same time. I was ready to apply and implement all those skills I had been learning throughout the years.”

His initial days at Carlile were spent in professional development with the staff, which he quickly determined to be “amazing.”

“They were very supportive of me, and hard working,” Principal Pool said. “And it was clear that everyone agreed with my motto of ‘doing what’s best for kids.’”

With Carlile having moved up from the Improvement framework to Performance as Principal Pool took over, he set a goal of keeping the school in that tier.

“I knew we had to stay in Performance and grow. We couldn’t go backwards,” he said.

To achieve that, initiatives to drive math and English instruction, with a focus on data, were implemented.

At Carlile, the development of the “whole child” is the ultimate objective. A key component of that is the work of the All Star Team in contributing to the growth and development of children with autism.

“It’s super hard work,” Principal Pool said of the efforts of his All Star Team. “There are times when they have as many as 18 students, all at once, in their room. But it’s one of the most rewarding things to go back there and see the student run up to you because they want to give you a hug.”

The robust parental support at Carlile became increasingly evident during the pandemic and the accompanying remote learning.

“I can’t tell you how many times this last year of the pandemic parents have said, ‘I don’t know how you guys do that job.’ They’ve come to understand that this is hard work,” Principal Pool said.

The atmosphere at Carlile, Principal Pool continued, is overwhelmingly positive and supportive.

“A few years ago, No Bully did an article with the Colorado Department of Education about our initiatives for No Bully and our positive school culture and climate,” he said. “As adults, we want to model that welcoming behavior so that it trickles down to our students.”

Within his motto of “Work Hard, Be Kind and Be Present” is the summation of Principal Pool’s character.

“By modeling that, I can have other people continue to follow that,” he said.

The essence of a “people person,” Principal Pool is excitedly looking forward to a return to fully in-person instruction.

“We miss our kids and want all our kids here,” he said. “That way, we can fill those gaps and continue to grow forward social-emotionally and also academically.”

Although the field of education is not without challenges, Principal Pool said they pale in comparison to the rewards of the profession.

“Just seeing the kids smile and the glow on their face when they learn something new,” Principal Pool said. “Or that smile when you ask them, ‘Hey! How’s your day?’ or ‘What did you do this weekend?’ That rapport and that connection with the kids is what we are here for.”

Principal Pool bolsters those bonds daily, through his regular visits to the classroom, cafeteria and playing areas.

After hearing Principal Pool speak over the school’s intercom, a youngster in the All Star program told his teacher, “I want to go to the Principal’s Office!”

“It was awesome to see a kid who wanted to come to the Principal’s Office and not see it as something scary,” he said.

Randy Ortiz, a Counselor at Carlile, praised Principal Pool as a “great communicator who loves kids. He’s also concerned about staff as well as students. He’s really genuine and has brought a lot of kindness and compassion to Carlile.”

Physical Education teacher Becky Golob has spent the past 30-plus years at Carlile.

“Principal Pool has brought positivity to the school,” she said. “He’s patient with the kids and wonderful with the staff. He’s changed the whole personality of our school, in a positive way.”

When he closes the book on his career as an educator and leader, Principal Pool hopes he will be remembered as someone “who would model and do everything he asked others to do, and that he did what he believed in: working hard, being kind, and doing what’s best for kids.”

Until then, Carlile remains his cherished home.

“I couldn’t be more blessed to work in a better place than Carlile. I wouldn’t change or trade it for the world,” Principal Pool concluded.