A Love of Children has Defined Sandy Alvarez's Careers 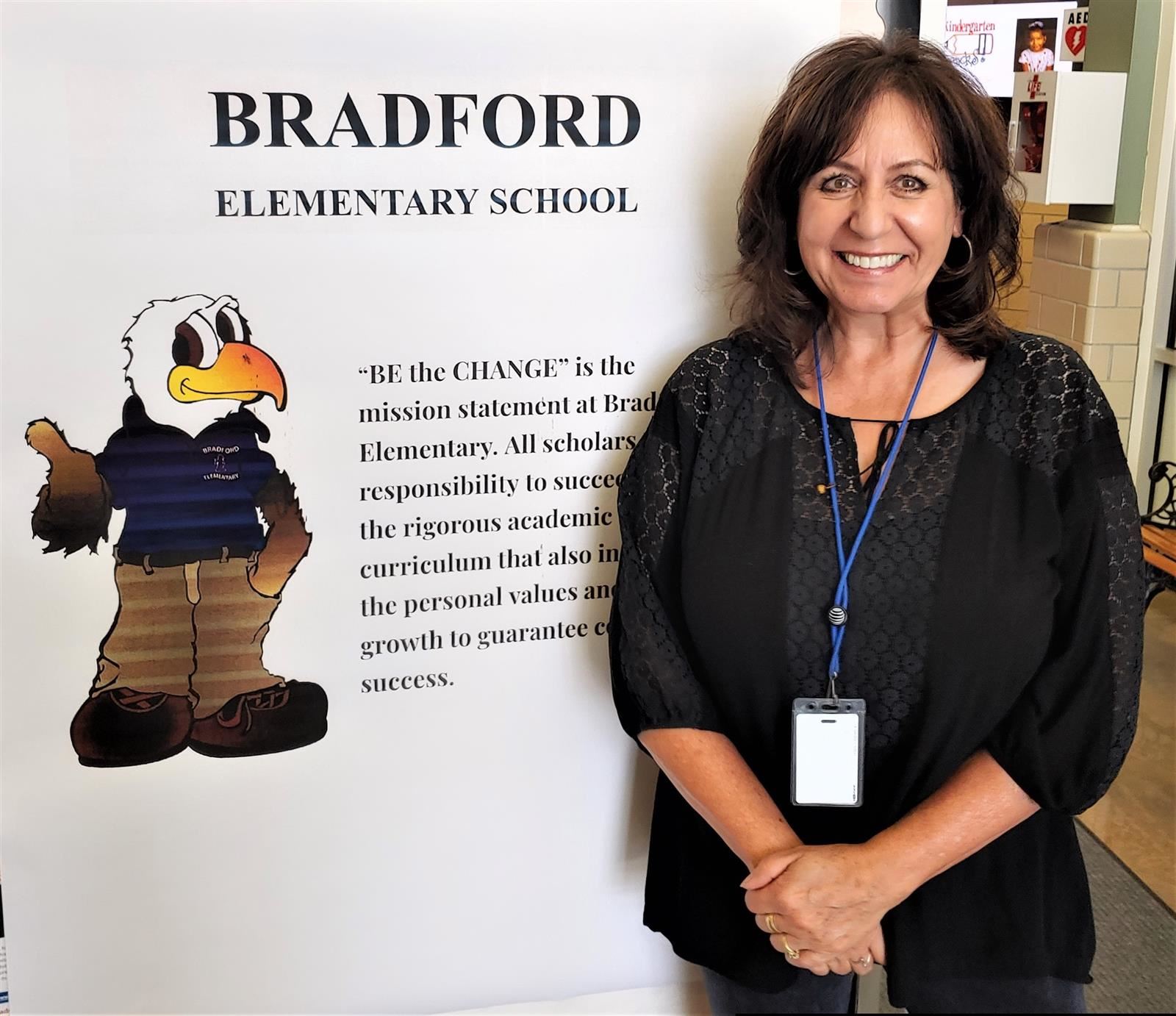 Whether her own or those in the classroom, children have been Sandy Alvarez’s life.

And after a 30-year career in education, the last 15 as Principal of Bradford Elementary School, Mrs. Alvarez is moving on to the next phase of that life: one that will, not surprisingly, reflect her love of instructing.

Principal Alvarez has had two rewarding careers: first, as a stay-at-home mother passionate enough to make her own baby food, and as an educator.

She approached each with dedication, compassion and a genuine desire to see those under her charge grow, flourish and be successful.

“My husband and I lived in the mountains in California,” Principal Alvarez said. “I was kind of a ‘back to nature' type of girl, and made my own baby food. Who does that anymore?”

When her three children were old enough to begin attending school, Principal Alvarez volunteered in the classrooms. It was the start of what was to eventually become her second career.

“I thought to myself, ‘This is kind of fun.’ I started doing bulletin boards and things like that,” she said. “Originally, I wanted to work in a pharmacy, but education started to take precedence.”

Principal Alvarez began her collegiate studies in California and after the family moved to Pueblo, completed them at what was then the University of Southern Colorado. She earned a degree in social science with minors in reading and education.

And at the age of 40, Principal Alvarez optimistically launched her second career, teaching third grade at Rye Elementary School.

Classifying herself as an “energetic go-getter,” Principal Alvarez learned an important lesson on her first days in the classroom.

“Being the person I am, I was thinking that teaching was the kind of job that if you worked hard enough, you’d actually finish something,” Principal Alvarez said. “It was difficult for me to grasp hold of the fact that every day, it’s going, it’s going, it’s going, and you don’t have an end product.

“So that was really challenging, because if you don’t give me a ‘stop point,’ I will just keep working and working. Fortunately, the school environment and community were very nurturing.”

With time, Principal Alvarez settled into teaching, eventually moving onto another “country school:” Vineland Elementary on the Mesa. She spent more than a decade there.

“It was another great experience,” she said. “The people in the county are down to earth, kind and supportive.”

In 2000, while she was working toward a Principal’s license, Principal Alvarez began her association with District 60 by accepting a 1st-grade teaching position at Goodnight School.

“I had been teaching about 12 years, and a lot of the primary teachers would come to me and I would share things that worked. So I was kind of the ‘giver,’” she explained.

At Goodnight, Principal Alvarez completed an administrative internship: an important step toward her eventual future.

“As an inspiring administrator, I made the move up to the 5th-grade classroom at Goodnight, because I wanted to get a feel for what was going on in other grades, and how you prepare for tests and things like that,” she said. “I had always focused on teaching kids to reach, and was successful at that, but now I was looking at a whole other gamut of education.”

Principal’s license now in hand, she felt it time to make the move from the classroom into building administration.

“I had already applied to be Principal at several other schools and didn’t quite get selected,” Principal Alvarez said. “So I gave Belmont the good old try.”

A few days after applying for the Principalship there, she received a call informing her that she had been selected to become a Principal: not at Belmont but at Bradford Elementary School.

“I didn’t apply at Bradford and honestly, didn’t know anything about it, including where it was,” she said. “After asking a colleague where Bradford was, I got back on the phone and said, ‘Absolutely! I’ll take it.’”

And in 2006, Principal Alvarez assumed leadership of the East Side school.

“There was a pretty big learning curve,” she said. “I’d never been in a Title 1 school, but you look into the face of a child, and you see that child, so nothing else mattered.

“Kids don’t come into the world with a lot of choices, and so when you can give them an opportunity to choose their tools and their direction, they can do anything.”

Her first year as Principal was, admittedly, “very challenging.”

“I had none of the team that I have now,” Principal Alvarez said. “In fact, I didn’t even know I had to build a team. I had one Lindamood-Bell interventionist who I never saw and a community advocate and counselor who shared the same room. And we weren’t really connected.

“So it wasn’t really a ‘learning curve.’ It was a straight shot up to the sky.”

During her first summer break at Bradford, Principal Alvarez researched how to create a strong leadership team. Then, with Title 1 funds, she hired Kristine Spinuzzi as an Instructional Coach, and that team was on its way.

“Kris and I worked Monday through Friday and we spent every Sunday planning: what needed to change, what professional development we needed to bring in, how we were going to track data,” Principal Alvarez explained. “And over the course of time, I got a counselor, who was amazingly good at Response to Intervention and working with kids.

“Over time, I was able to hire additional coaches and/or interventionists and created something called a Distributive Leadership Team. We met every Friday morning and would go through each classroom, and talk about what we needed, holistically, to bring our test scores – which were always abysmal – where they need to be.”

The effort paid off, as Bradford went from a Turnaround rating to Performance within a couple of years.

With a high turnover in staff, and a fluctuating student population, maintaining consistency and stability was a persistent obstacle.

"For many, Bradford is a place to start and stop, because we give the best training for teachers," Principal Alvarez said. "I remember other Principals, and even a past Superintendent saying, ‘Oh, we love hiring your teachers because they are the best trained.’

“So it’s difficult to maintain consistency when in a given year, I might have only 50% of the teachers return. And our student mobility is just as high, so that makes it difficult to get traction.”

Solid and well-thought-out planning, however, can overcome a litany of challenges.

“When you have good planning and a good team, when you get new kids, you pick them up where you are and move on,” she said.

The strength of Principal Alvarez’s team, and in turn the school, has been bolstered through a grant-funded diagnostic review and frequent training and personal development, as examples.

Although she has engineered a sense of stability and consistency at Bradford, Principal Alvarez is reluctant to accept full credit for it.

“It’s a team effort,” she said. “There’s a good solid team here: even the secretary is amazing. I always say I could be gone for a week and nobody would know, because the school runs itself. It’s like a well oiled machine.”

Appropriately, the Bradford Principalship baton will be passed to Principal Alvarez’s longtime Dean of Students and Media Specialist Michelle Padilla, who like her mentor, is a tireless advocate for Bradford and its Eagles.

“Sandy has been a phenomenal mentor,” Mrs. Padilla said. “She’s shown me every aspect of the job and made sure I’ve been alongside her every step of the way. At Bradford, Sandy has created a strong culture of growth for everybody: scholars as well as staff.

“It’s a very warm environment where everyone is excited to be. We feel like a very strong family here.”

In retirement, Principal Alvarez plans to “get back to the land,” so to speak, and explore her passions.

“There’s a lot of things I want to do,” she said. “We have a little acreage off of Burnt Mill Road, and I want to make my own flower pots and garden. I want to have classes where people come and learn some gardening things and some cooking things.

“I want to do other things, but they always seem to follow the vein of teaching. So it’s just time to branch out and do different things. I’ll be leaving the building but I plan to stay connected.”

The Bradford community, especially the thousands of Eagles who passed through the halls under Principal Alvarez’s watch, will never be far from her heart.

“I’ve had so many kids in here who had problems and issues, and things in life that have led to them being unhappy,” she explained. “And I always tell them, ‘Hey, there’s a whole other world out there, and I’m going to give you the tools to go make it better.’”