Anticipation and Joy Mark a Return to In-Person Instruction

The joyful sounds of little ones frolicking on a playground that had been silent for the better part of two months was the first sign, and an uplifting one at that, that Bradford Elementary School was “back in business.”

Inside the classrooms of the East Side elementary school, industrious Eagles focused on the academic task at hand after intently listening to the instruction provided by their teachers: the respectful silence a notable contrast to the exuberance of the playground scene.

Throughout the halls, and infrequently impacted spaces, custodial staff vigorously sanitized: a routine that would continue throughout the day.

Down in the cafeteria, nutrition services personnel were busy preparing a lunch of meatball sandwiches and vegetables for the youngsters who soon would be arriving. 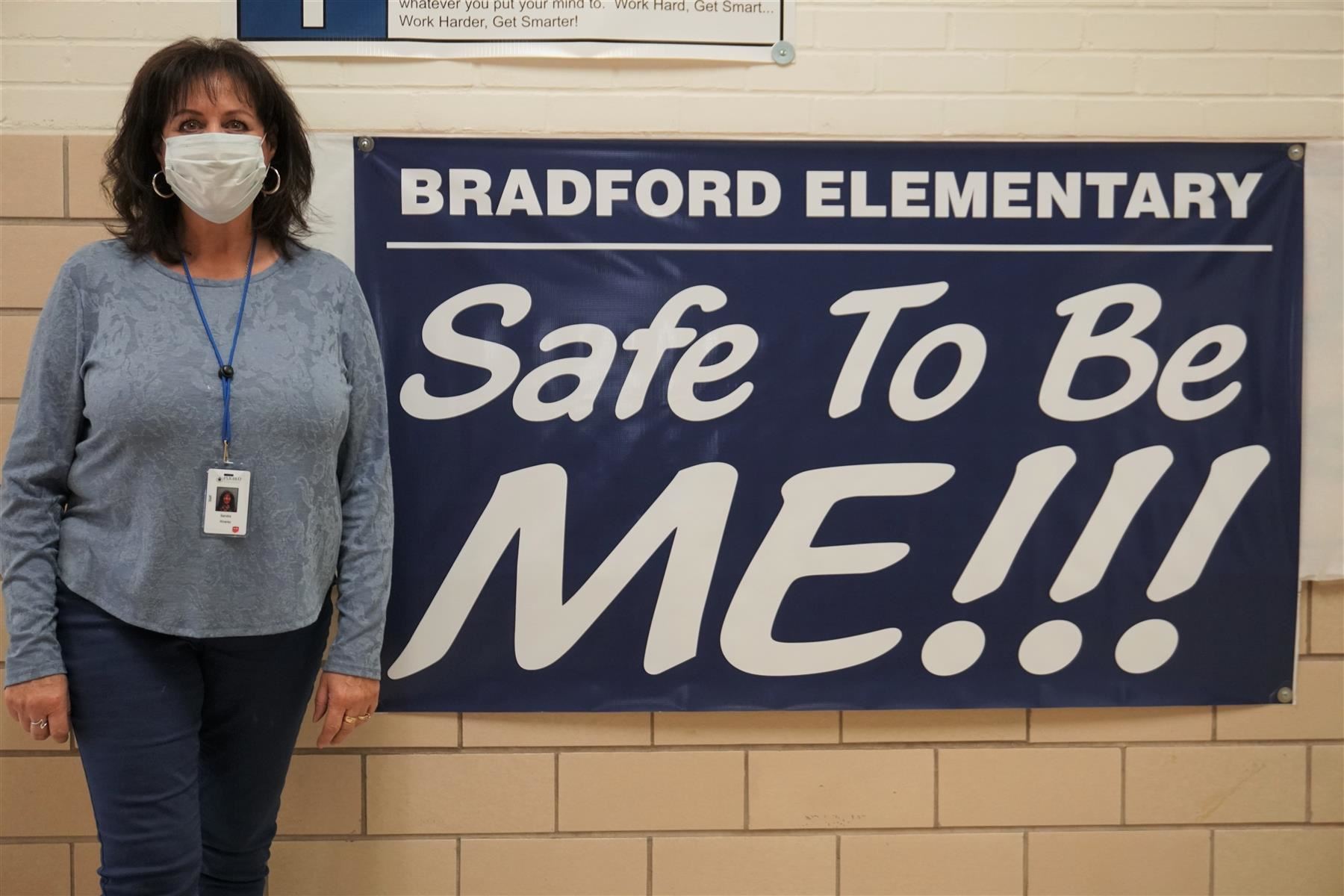 And overlooking it all was Bradford Principal Sandy Alvarez, whose beaming smile was no match for the facemask shielding it.

“Once I saw the kids coming in, I felt like, ‘We are in school again!’ Who has school without children?,” Ms. Alvarez said. “It was wonderful to see all their faces. One of the children told me, ‘Oh, it’s been so boring and I’m so happy to be back.’

“It feels good. The energy level was high and the teachers are excited. I know they missed their kids and we missed them too.”

On Monday, Pueblo School District 60 elementary school students returned to in-person instruction after two weeks of remote (distance) learning that ushered in the spring semester. Middle schools also reopened on a hybrid platform, with students to spend two days in the classroom and two days completing their work remotely.

A decrease in local COVID-19 cases, coupled with the impending distribution of vaccine to educators and the district’s vigilant commitment to safety protocols, enabled school doors to once again be opened and Monday’s inspiring face-to-face reunion, with teachers and fellow scholars alike, to unfold.

After weeks of remote learning extending back to late 2020, and a two-week winter break, the reconnection was cause for celebration districtwide.

“It’s just an overwhelming joy in being able to be reunited again and do what we do best: and that is teach our kids,” said Dalton Sprouse, the district’s director of communications. “This normalcy is something that our students depend on: they need routines.”

At Bradford Elementary, that routine was eagerly embraced by the Eagles, whether in the classroom, the halls or the play area.

“I was really happy walking into school today because I knew I’d have a fun time,” said Isaiah, a Bradford fifth grader. “I really missed everybody and the best part of the day will be seeing everybody again. I’m also looking forward to learning.”

Isaiah’s teacher, Shawnce Solis, was equally as elated to be back in front of Isaiah and his fellow fifth graders.

“Now, when the kids have a problem and ask a question, they can see exactly what I’m showing them on the board,” Ms. Solis explained. “There is no need to ask for tech support because we can’t see the kids, or the kids can’t see what I’m doing. They are all here.”

Across the hall from Ms. Solis, the feeling in Amanda Coatney’s second-grade classroom was similarly upbeat. 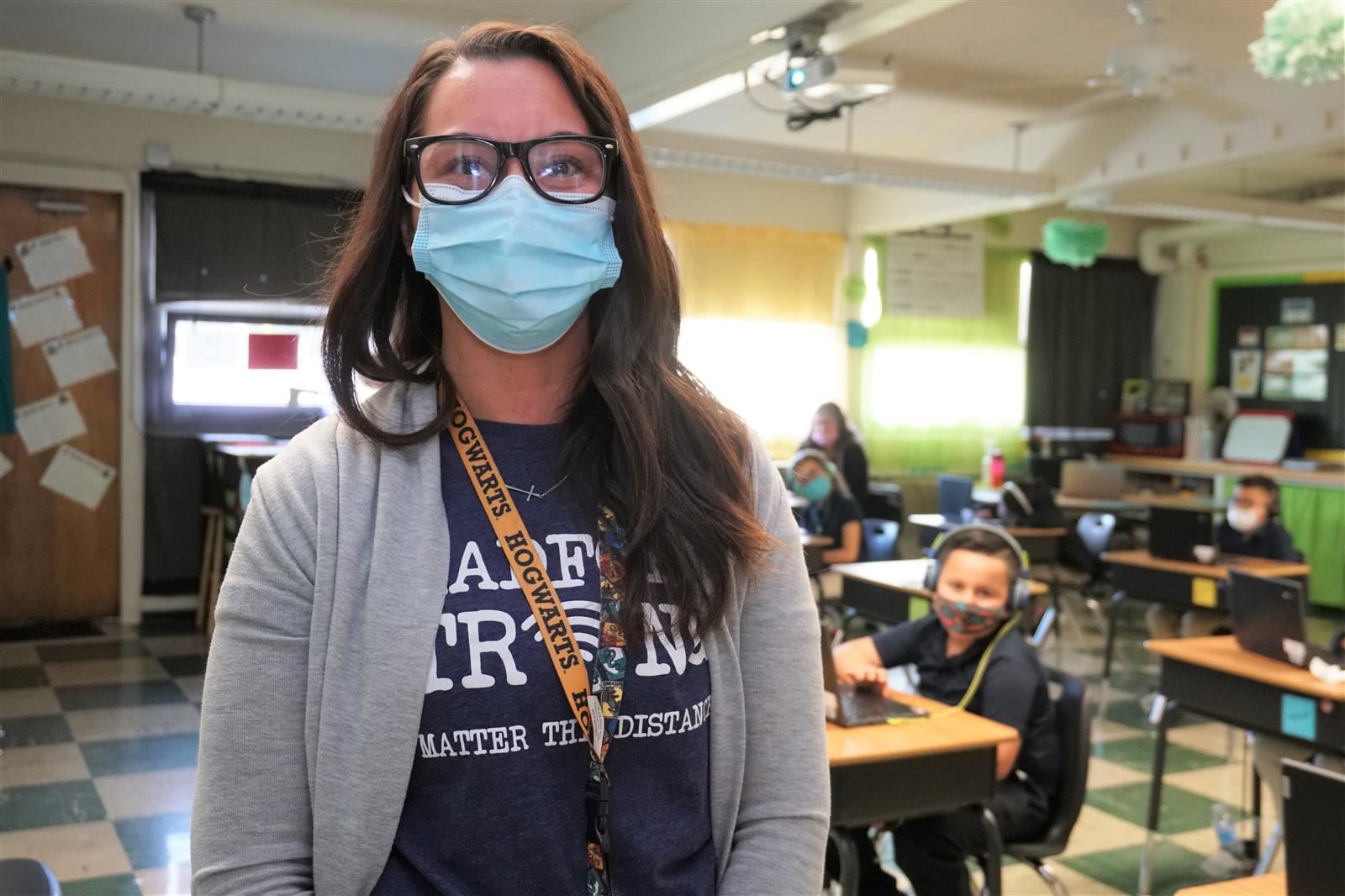 “I feel so blessed that we are back in person,” Ms. Coatney said. “I get to see my kids, so I can get a better grasp on what they need. You can control the environment and they’re learning. Plus they get to interact with each other.”

And for young social creatures like elementary school students, that is an enriching benefit of the traditional school experience.

“It feels very exciting to be back, and I’m very happy to be here again,” said Anicia, a second-grader. “It’s like we get to see each other again and hang out with our friends. I was kind of bored at home, not being able to have fun with my friends.”

Anicia said she is prepared to follow the safety protocols and protective measures in place at Bradford as well as all district schools.

Although building leaders and educators agree that there is no real substitution for in-person instruction, Principal Alvarez said that through the committed efforts of her teaching staff, Eagles remained engaged, especially in literacy and reading, during distance learning.

“We have a big Early Literacy Grant, and today we are meeting with our grant consultant,” she explained. “And looking at our mid-year data, we were really concerned that our kids were missing out. But after meeting with our consultant today, it isn’t as bad as I was afraid it might be.

“Those kids who stayed online, and did all they could to access the academic instruction, held on to it pretty well. And that’s a credit to my teaching staff. Sometimes we talk about ‘building the plane as we fly it:’ first they were online, then in person, and then online. We changed our schedules half a dozen times, so I really want to give a shout out to my teachers, because they were flexible and never let up: the integrity was solid the whole time.”

After a long stretch of providing students with meals in a drive-through format, the district’s Foodworks staff were happily looking forward to serving in person and the rewarding interaction that accompanies it. 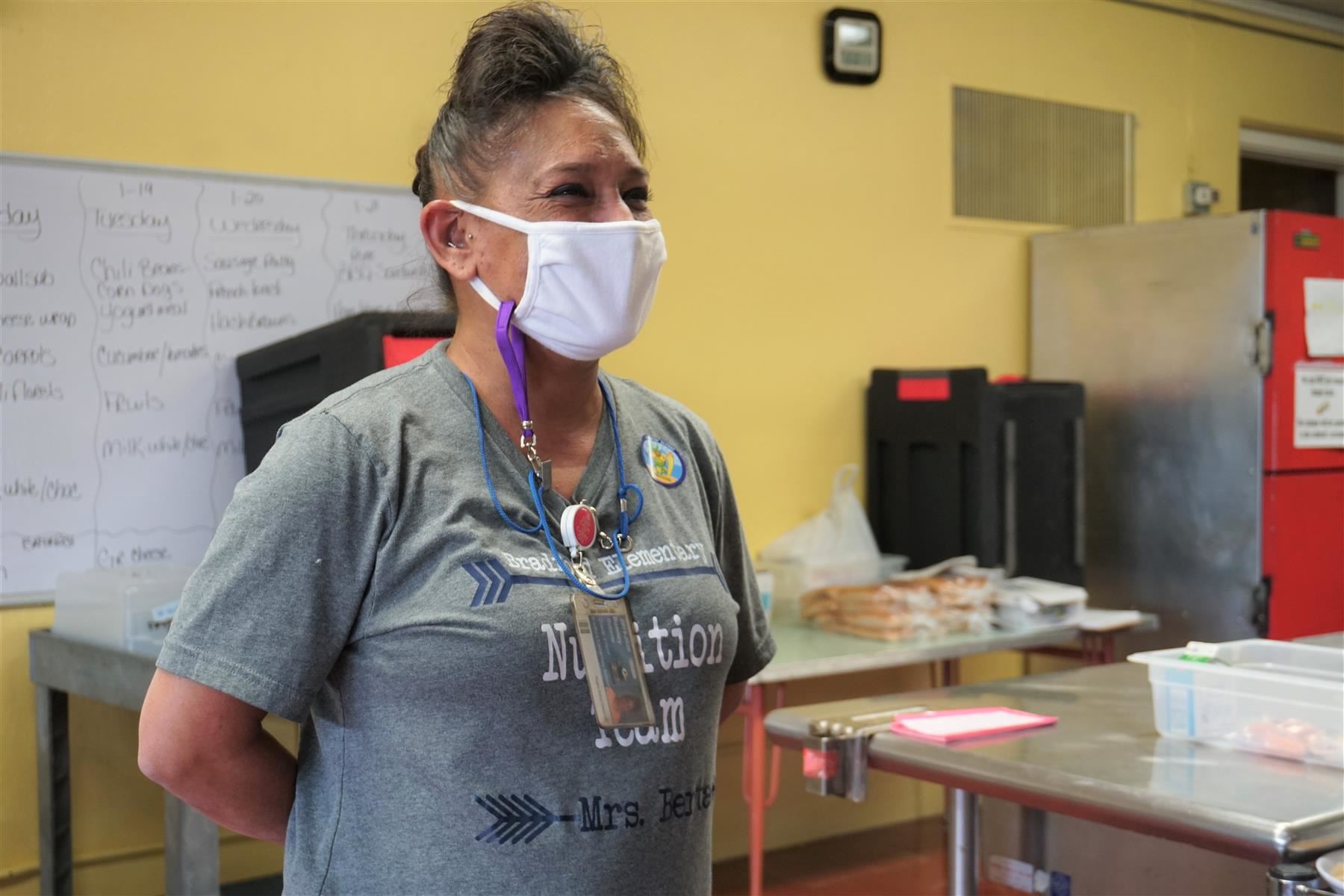 “Either way, we have to serve the kids, and I enjoy doing it,” said nutrition services staffer Roberta Bonney. “Now that we’re back here, it puts us back on track and lets us see their faces, which we missed. We get to see them here now, instead of at the stores. And I love it.”

In Bessemer, Katie Harshman greeted the stream of Lil Cats filing into Minnequa Elementary School with her usual buoyant enthusiasm.

“Sophia! Good morning,” Principal Harshman announced. “Is that David over there? You had more hair last time I saw you! I thought you were going to let me cut your hair.”

“Did you have a nice Christmas,” Ms. Harshman asked another Lil Cat, who applied in the affirmative. “Great. What did you get me for Christmas?”

A pair of Minnequa parents who accompanied their children to the school Monday said the anticipation of a return to “regular school” was nearly too much for the little ones to bear.

“My daughters were so excited I didn’t even have to wake them up today,” one mother said. “They’re ready to learn, because it’s a lot different learning virtually than actually being in the classroom.”

“We’ve been home since November,” added the mother of a Minnequa kindergartner. “And my daughter was up at 5 o’clock today, so excited to be back at school and learning again. She missed everybody.”

In addition to the Minnequa welcoming committee led by Principal Harshman, the Lil Cats entering the building Monday were greeted by a new addition to the school: a colorful 4 x 8 panoramic painting created by artist Joe Cawlfield with creative input from Minnequa third graders. 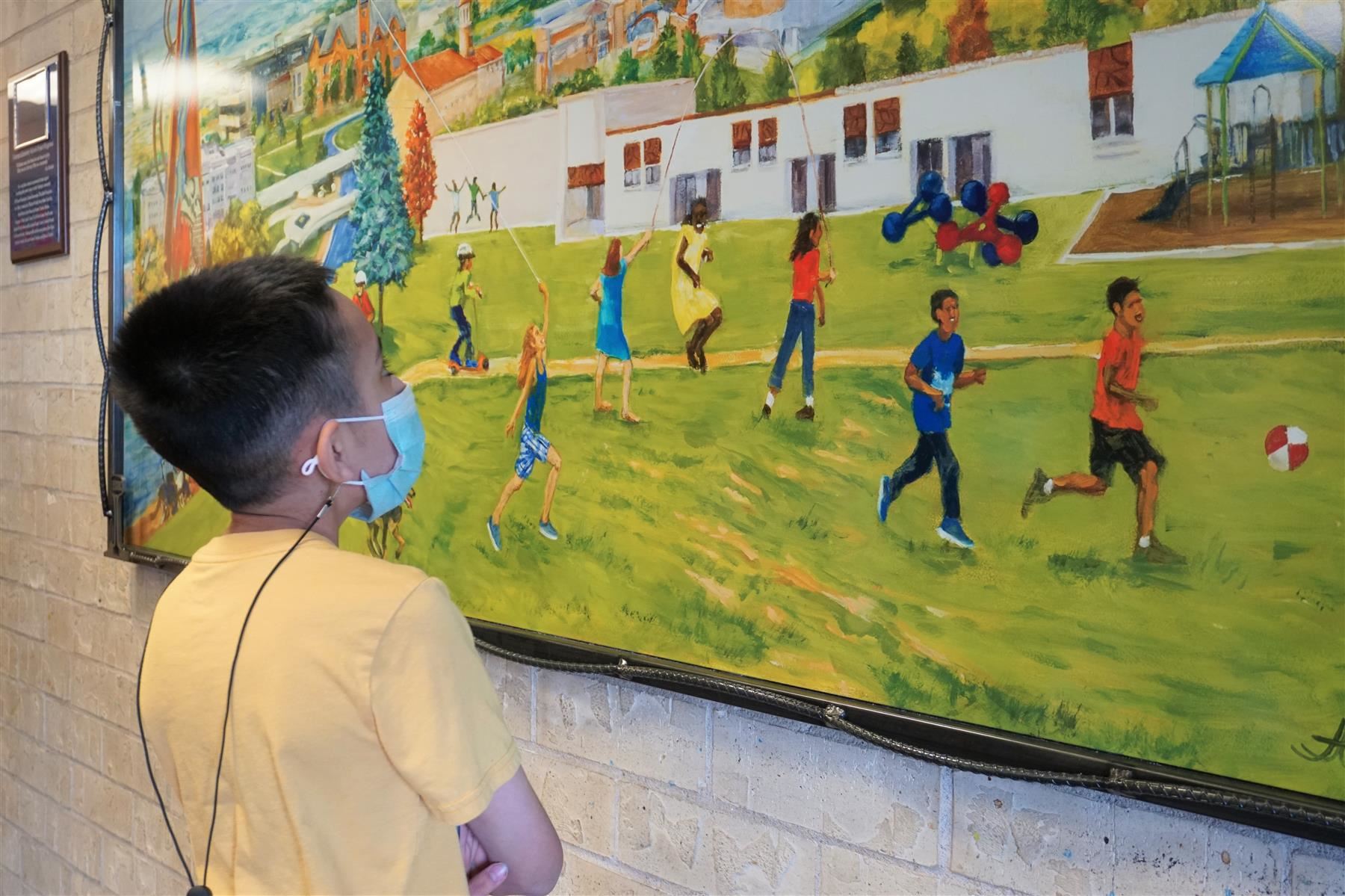 The art piece was an end result of a year-and-a-half educational collaboration between the City of Pueblo and Minnequa in connection with the Gateway to the Southwest monument north of the town.

As the Lil Cats who contributed to the painting viewed it for the first time, its distinctive elements were pointed out by art teacher Tracy Mullis.

“Can you guys see Central High School?,” Ms. Mullis asked, as a child pointed to a structure. “No, that’s the Union Depot. Central is a big white building.”

The Orman Avenue institution located, another Lil Cat returned his attention to the Rawlings Library.

“My house is right behind that,” he said.

“Wow,” Minnequa volunteer Victor Reyes quickly chimed in. “I didn’t realize we had a geographer in the group.”

“And most importantly,” Ms. Mullis concluded, “Where’s our school?”

To that question, there was no hesitation in the response.

In a hybrid format, D60 high schoolers are set to return to in-person instruction on Monday, January 25.

The return of in-person instruction coincides with the start of the School Choice lottery process, which allows D60 families the opportunity to apply for a seat in a school other than the one their child is currently attending.

School Choice also allows families who live outside of the district, or who have students attending non-district schools, to apply to join the D60 school community.

More information is available at www.puebloD60.org 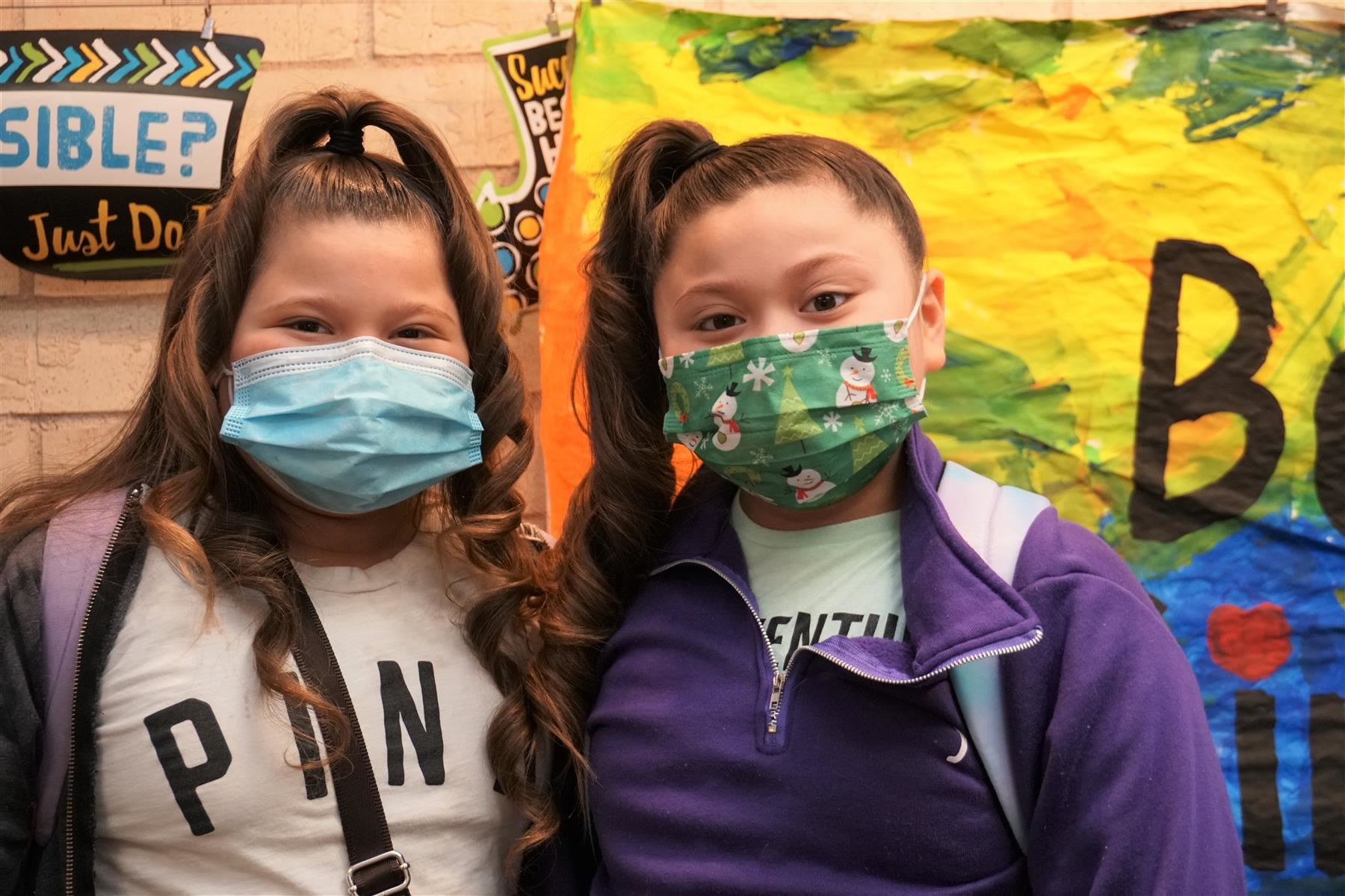